Windows 11’s start menu comes with just a single new feature: a short list of recently opened files and installed apps. In fact, one of the main characteristics of the start menu is the removal of features. The Live Tiles of Windows 10 are gone, but that is just one of the many features that Microsoft removed. 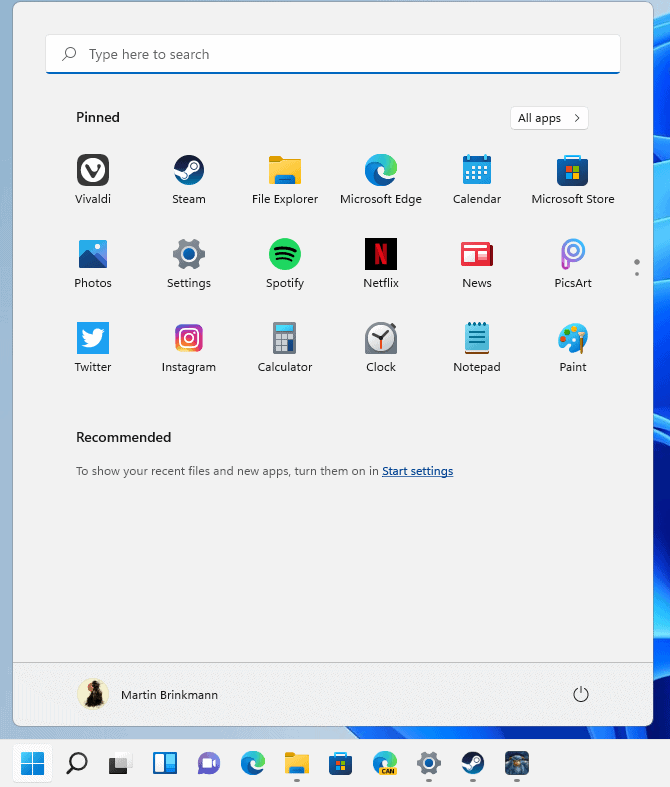 The default Windows 11 Start Menu displays a search at the top, 18 pinned tiles above the fold, more when you scroll, and recommendations below that. A link to “all apps” is available to display all Start entries in alphabetical order. You find options to lock the system, switch to another account, sign-out, or change the power state of the PC at the bottom.

Folders, that can hold multiple icons, are gone. Groups, which you could use to organize Start Menu shortcuts, are gone. The option to display the all apps listing and the pinned items on the Start Menu at the same time is gone as well. Different tile sizes are not supported anymore either, and you cannot expand the Start Menu’s size anymore.

What you can do, is use drag & drop to move pinned icons in the Start Menu around, or use right-click operations to remove pinned items. Applications can still be added to the interface by right-clicking on them in Explorer or elsewhere and selecting the pin to start option.

The Pinned and Recommended areas of the Start Menu have fixed sizes. While you may hide all recommendations or reduce the number of pinned items below 13 or 7 to free up rows, doing so does not make room for other content in the Start Menu. You are left with empty space that has no function whatsoever. 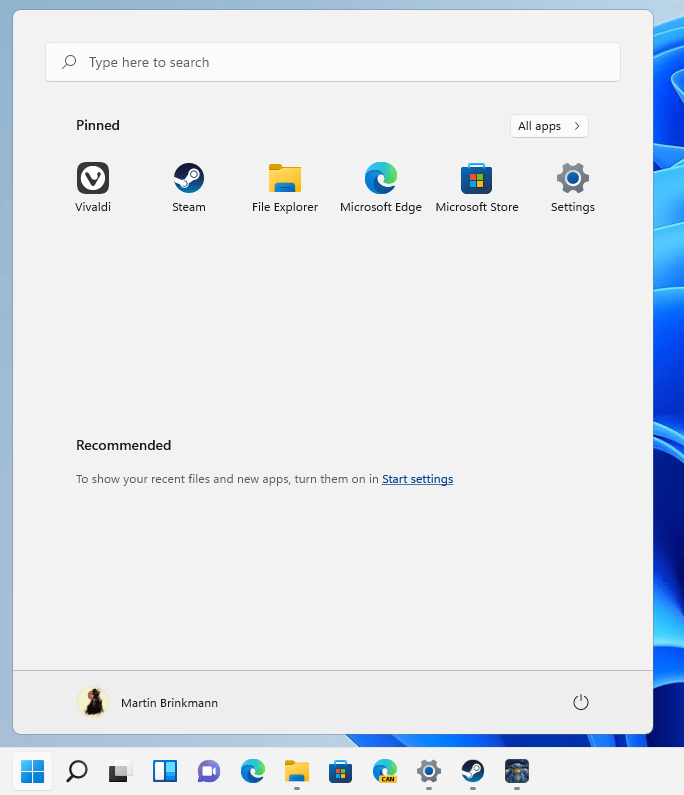 Ultimately, what you get right now is a launcher with 18 shortcuts, the option to scroll to display more, an option to display the all apps listing, and a short listing of recently used programs/files and new applications, which you may expand as well.

Since the Windows 11 Start Menu is so limited, one has to wonder why it should be used at all. You could put the shortcuts on the desktop or taskbar, and launch them from there without ever opening the Start interface. You could also rely on search for that, even though Windows Search is far from the best option when it comes to search on Windows.

As far as the recently used or installed listings are concerned, these may work in work environments, but since the listings default to just three items each, they may not be that useful in home environments. As soon as you open more than three files during a session, you won’t see all files opened during that session under recent anymore. Since all file types may be listed there, it is just the matter of opening three photos, video files, text files or any other file type to push out items from the recommended section. Windows 11 does display a “more” button in that case, which you may activate to display a larger listing of opened files sorted chronologically.

The Windows 11 Start Menu lacks customization options. While that may reduce issues that users may experience when using Start and is thus beneficial for Microsoft, it at the same time reduces the usefulness of the Start Menu.

Even basic options, such as the removal of the Recommended section if you turn it off, is not supported. There is a slim chance that Microsoft is going to change that before the final reason, but if past decisions are anything to go by, it is more likely that the Start Menu of the preview builds will be the menu that users get when the operating system is released to the public.

Windows users who rely on the Start Menu may replace it using third-party apps such as Start11 or Open Shell, among others that will be released in the future. These bring back classic start menus to Windows 11, which you can customize to your liking.