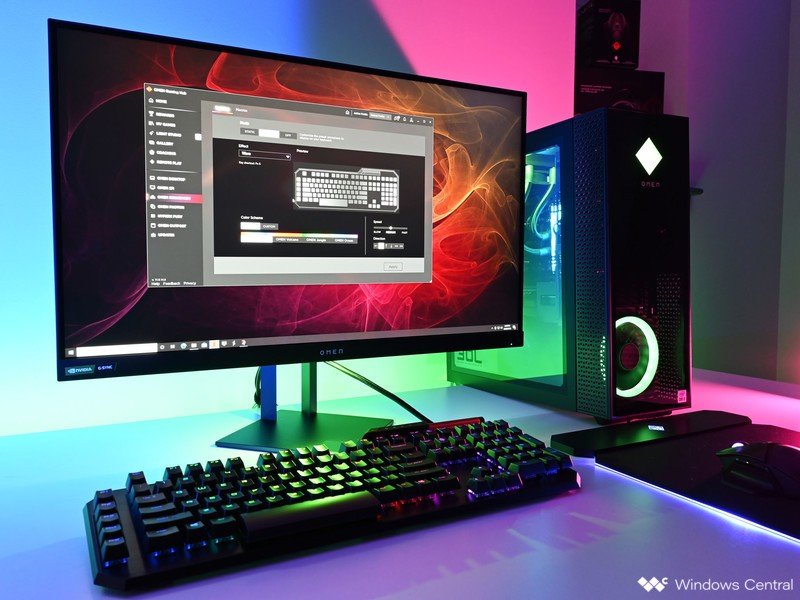 The best desktop PCs for VR include powerful hardware, allowing you to fully enjoy your VR experience. If you don’t want to go through the hassle of building an entirely new PC to get there, we’ve rounded up some tremendous pre-built desktop PCs, like the HP OMEN 30L with 10th and 11th Gen Intel Core or AMD Ryzen 5000 processors (CPU) and NVIDIA RTX 30-series graphics cards (GPU). It’s built from the ground up with performance and unique design in mind, making it your best bet for an ultimate VR desktop. 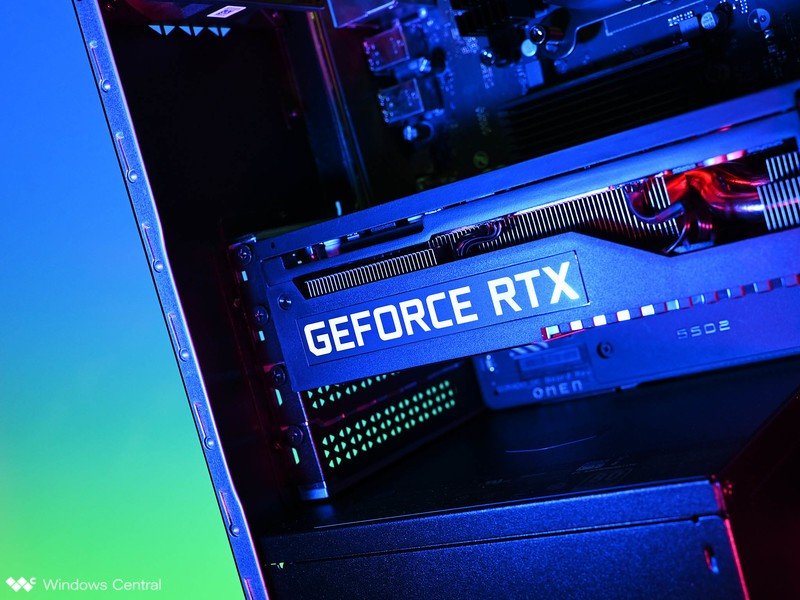 You’ll often pay more for the luxury of having your PC built for you, but in the case of HP’s OMEN 30L, it’s no doubt a close call. It’s available with 10th and 11th Gen Intel Core CPUs up to an i9, or up to an AMD Ryzen 7 5800X for insane performance. Liquid cooling is available in a bunch of models if you configure at the official HP website. You can also get up to 64GB of HyperX DDR4-3200MHz RAM, a 2TB M.2 PCIe NVMe SSD coupled with 6TB of HDD space, and an NVIDIA RTX 3090 GPU with 24GB of GDDR6X VRAM. If you can’t get your hands on the best graphics cards alone, a pre-built might be the way to go.

Everything is contained in a redesigned 30L tower with a white rhombus logo (gone is the red tribal mask) and a streamlined design with a brushed aluminum finish. It’s quite fetching, and it’s not nearly as over-the-top as the Alienware option we love, which is preferable for a lot of people. Add Wi-Fi 6 for a few dollars more, and take advantage of many ports for easy connectivity.

Have a look at our HP OMEN 30L review for way more information about this awesome pre-built PC. Note that current stock at HP is limited, though you can still find OMEN 30L models at other retailers. Expect a refresh coming soon. 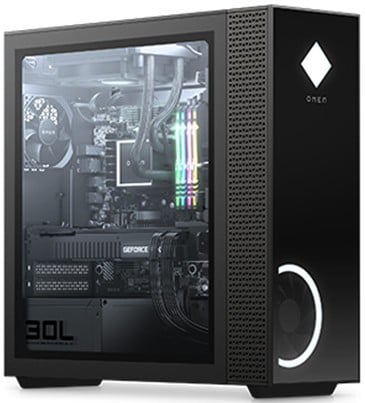 The redesigned HP OMEN 30L is a beautiful gaming PC packed with premium hardware for VR and otherwise. 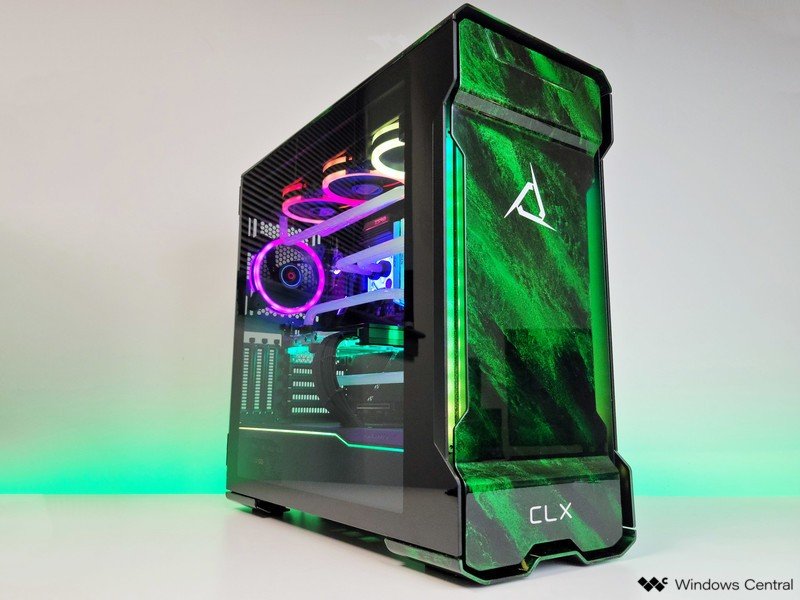 Executive Editor Daniel Rubino was lucky enough to get to pick out a custom build of CLX Gaming’s Ra desktop PC, and he didn’t take the task lightly. While prices start at around $2,200, he kitted one out with a final price tag closer to $7,000. That’s not a typo, and you too can spend that much money on a custom PC. Best part? It looks like a pro job, without a lot of the cut corners you’ll find from the big manufacturers like Dell and HP.

The number of configuration options available is overwhelming, and that’s a good thing for enthusiasts. That’s who the Ra is aimed at, and it is aims true. Get up to a 64-core AMD Threadripper or an 18-core Intel Core i9-10980XE CPU to quarterback the PC, then add up to dual NVIDIA RTX 3090 GPUs or single AMD RX 6900 XT water-cooled card. Everything else, right down to the cables running from the PSU, can be configured to ensure you’re getting exactly what you want.

It comes packed properly to avoid damage en route, and it comes with a full labor and parts warranty for one year with a 30-day exchange warranty. If you’re an enthusiast who is sick of waiting to find stock for your next build, this might be the way to go. Bring a fat wallet. 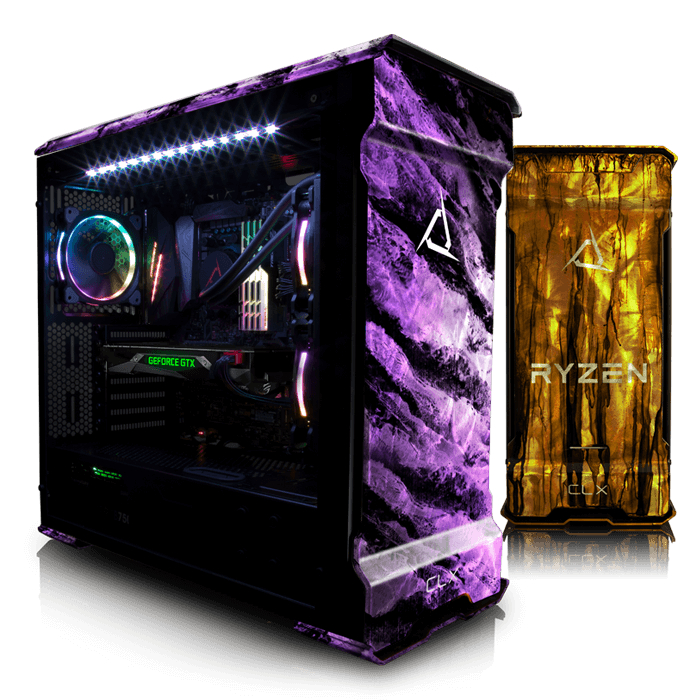 CLX Gaming makes custom high-end gaming rigs for those with specific hardware requirements including Intel, AMD, NVIDIA, and exclusive CLX Temper Hardline Liquid Cooling. Based in the U.S., the Ra is the biggest tower it has for the ultimate gaming desktop system. 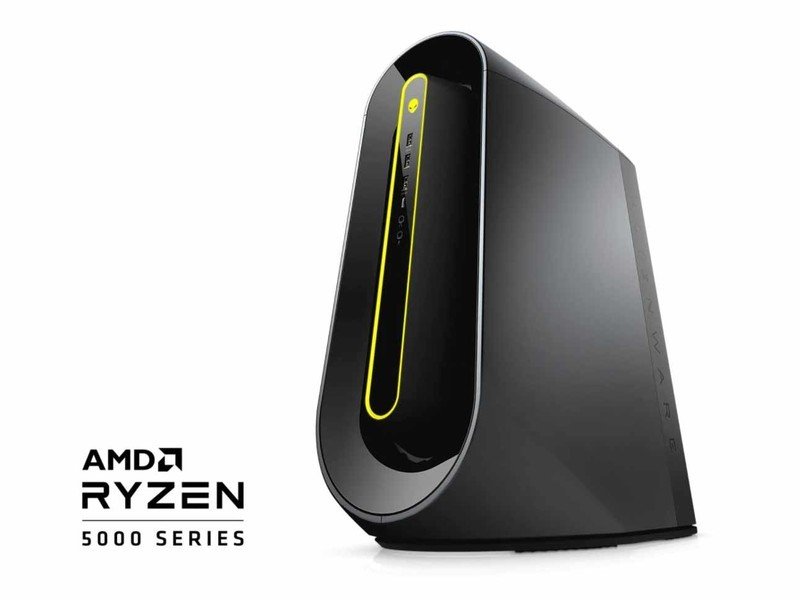 There are quite a few configuration options available for the Aurora Ryzen Edition, with a high-end model sporting up to an RTX 3090 GPU with 24GB of GDDR6X VRAM, a Ryzen 9 5950X processor (CPU) with 16 cores, 128GB of HyperX FURY DDR4-3200MHz RAM, and a 2TB M.2 PCIe solid-state drive (SSD) coupled with a 2TB hard-disk drive (HDD). A Wi-Fi 6 adapter can be added for blazing wireless speeds, and you can even add water cooling with a 1,000W PSU. This is no doubt some serious overkill, even for a stellar VR experience, and a mid-range option is in your best interest.

Spending about $1,638 will get you a PC with Ryzen 7 5800 CPU, NVIDIA RTX 3060 Ti GPU with 8GB of GDDR6 VRAM, 16GB of dual-channel DDR4-3200MHz RAM, and a 512GB M.2 PCIe NVMe SSD. That’s significantly cheaper than the high-end model, and you’re still going to get a killer gaming machine that will be able to handle just about any VR experience. Of course, you can always jump up to an even more robust GPU for more power.

The hardware is all contained in a unique case available in two colors, and it still has a PSU swing arm to allow easy access for upgrades and tinkering. There’s a boatload of ports for easy connectivity, including on the front are three USB-A 3.2, USB-C 3.2, and 3.5mm headphone and microphone jacks. The rear has plenty more, including six USB-A 2.0, four USB-A 3.2, one USB-C 3.2, RJ45 Ethernet, and many audio inputs and outputs for setting up surround sound. Customizable lighting on the outside of the case accents the lines and gives you some extra style to boot. This PC is also among our picks for the overall best gaming desktop PC available today. 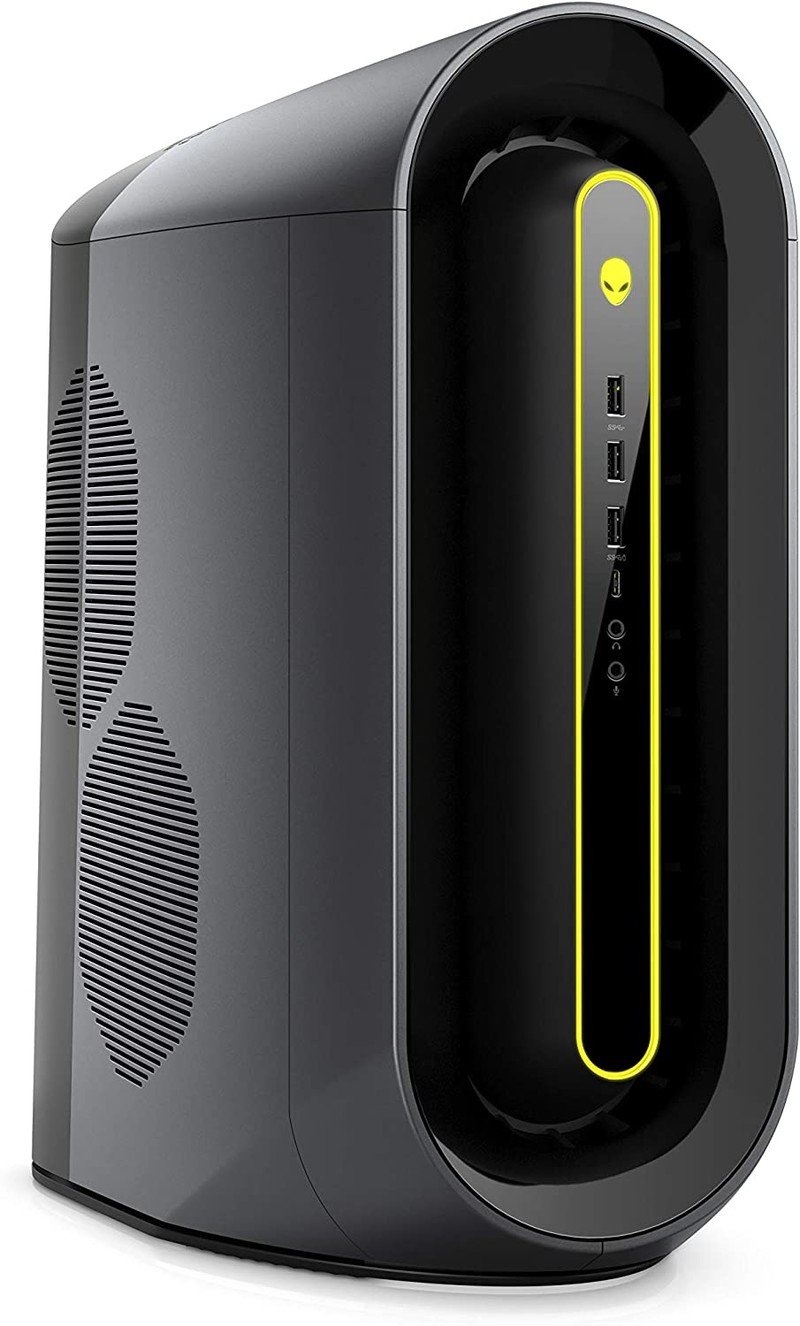 There are plenty of configurations that will handle VR content, and no matter what you choose inside, it all comes in an attractive case. 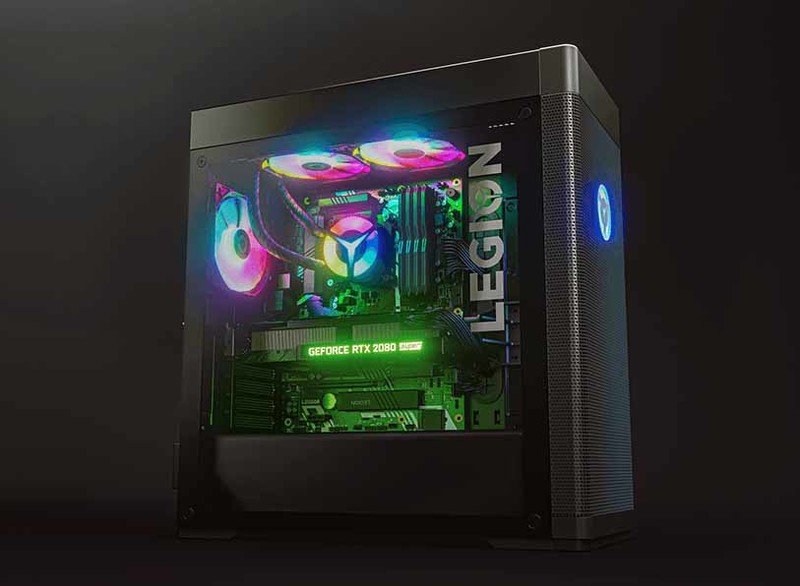 Lenovo’s Legion Tower 7i is a high-end pre-built PC that is absolutely dripping with RGB lighting. The 34L case, which has a tempered-glass side and mesh front for extra airflow, includes liquid cooling, multiple case fans, and even a carrying handle for easy transportation. If you’re looking for a pre-built with tons of style, this is what you want. And Lenovo has made it easy to upgrade in the future.

Extra features include Wi-Fi 6, Bluetooth 5, 7.1 surround sound support, and tons of ports, including USB-C 3.2, five USB-A 3.2, six USB-A 2.0, Ethernet, and six audio jacks. If you’re looking for a high-end PC that’s not totally priced at an unrealistic level, definitely give this one a second look. 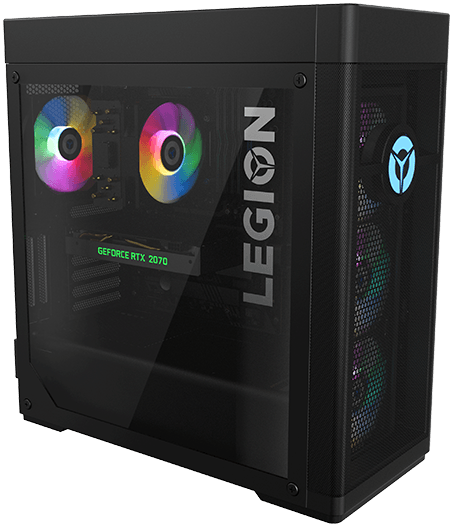 Tons of power and great looks

Dripping with RGB and packed with performance hardware, Lenovo’s Legion Tower 7i gets the VR job done in style. 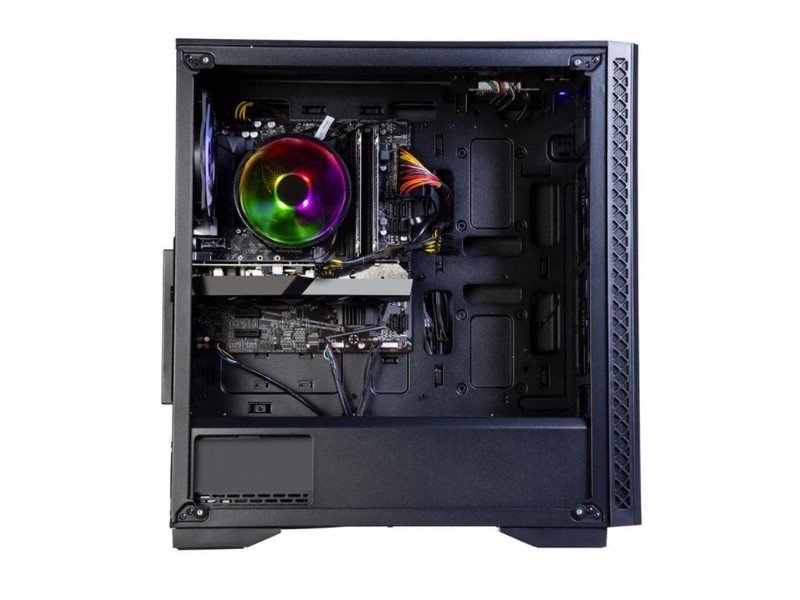 Gaming PC prices, especially those for VR, can quickly get out of hand. If you’re on a tight budget, something like Newegg’s ABS Master ALI489 delivers a lot of hardware for the asking price. While you can still find cheaper alternatives out there, the combination of performance and add-ons makes this PC a great value.

Inside is a 10th Gen Intel Core i5-10400F CPU, an NVIDIA RTX 3060 GPU with 12GB of VRAM, 16GB of DDR4-3000MHz RAM, and a 512GB SATA SSD built onto an Intel B460M motherboard. That’s some decent entry-level performance to get VR more than off the ground, plus it all comes in a fancy black case with glass paneling and RGB lighting.

Extras include a 600W 80+ Gold PSU, four 120mm RGB case fans, and an RGB CPU cooler. All models come with a gaming mouse and keyboard for some added value. 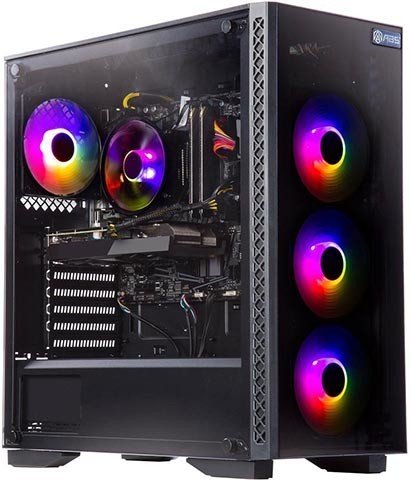 Lots of power at a reasonable price

It’s not the absolute cheapest PC out there, but the complete package is overall a great value if you need an entry-level PC for VR. 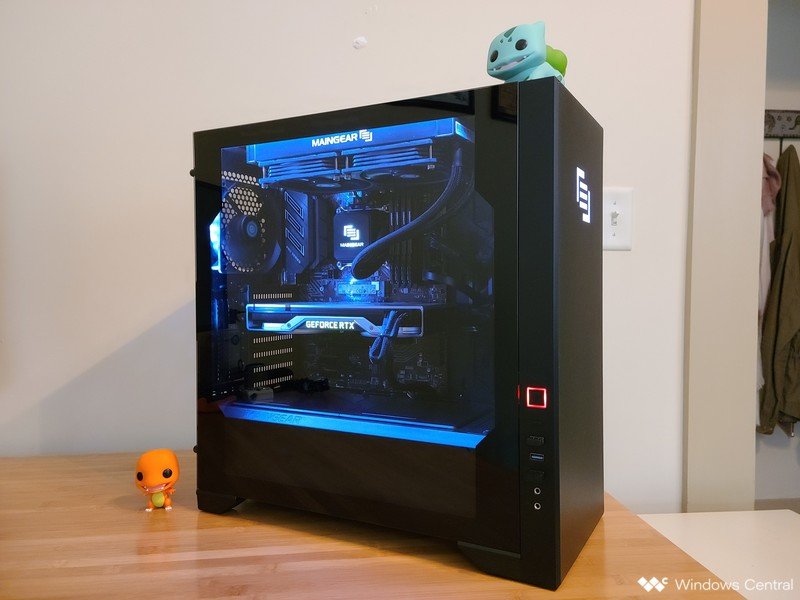 If you’re looking for a PC that comes built but feels like you built it, Maingear’s Vybe should satisfy. Several pre-configured performance stages are available, but there’s also a custom build option that lets you design a PC from the ground up. Choose case and paint, Intel or AMD CPU, RGB lighting, GPU, motherboard, RAM, storage, cooling, PSU, and more. As long as the budget allows, you can keep adding hardware to create something that will crush anything you throw its way.

The builds are clean with proper cable management, and there’s always the option for user upgrades in the future to keep the PC relevant. The case has a glass cutout on the side to show off hardware and any optional RGB lighting, and there are plenty of ports on the back for connecting all your accessories, including VR. For more information, have a look at our Maingear Vybe review. 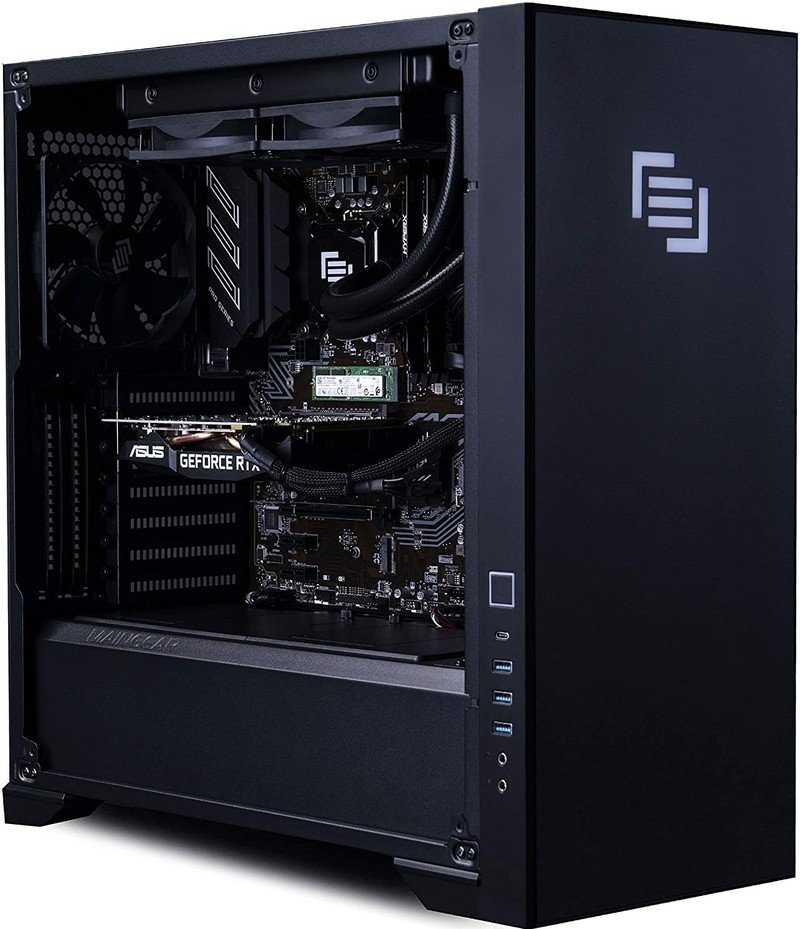 A pre-built PC that feels like you built it

The Maingear Vybe offers a ton of customization with a relatively low starting price. If you want a custom PC, this is a great option.

When it comes to getting the best PC for VR, sometimes you don’t want to build a new one from scratch. Luckily, there are plenty of pre-built PCs on the market that can handle the power of VR. You generally need a great gaming PC with a powerful GPU ⁠— like one from our roundup of the best graphics card options ⁠— a mid-range processor, at least 8GB of RAM, and enough ports to handle the headset and any sensors.

The HP OMEN 30L is likely the best pre-built PC for most people. It has plenty of VR-ready configuration options up for offer, all contained in a stylish chassis with enough ports for all your headsets and sensors. You get a sturdy warranty, and support is available if needed.

There are some cheaper options available that will get VR off the ground, but we recommend a mid-range configuration for a much smoother experience. In any case, you’ll be able to upgrade the PC to keep it relevant long into the future thanks to an easy-access case and unique PSU swing arm that leaves plenty of room for tinkering. It’s all contained in a redesigned chassis that is sleek and undoubtedly unique. For more options, check out our collection of the best gaming desktop PCs. And if you need something portable instead, have a look at our roundup of the best gaming laptops.