From a hardware standpoint, there’s no question that the Xbox Series X is an impressive console. While this new generation may not be marked by as large of a leap in graphics quality as we’ve seen in previous generations, the Xbox Series X nevertheless has some features and capabilities that make it feel like a true next-gen machine. If you just unwrapped an Xbox Series X over the holidays, here are some impressive things you may not know it can do.

Backward compatibility has been a major focus of Microsoft’s since about halfway through the previous generation. That the Xbox Series X can play Xbox One games along with some Xbox 360 and OG Xbox titles should not come as a shock. However, what might be a surprise is that the Xbox Series X can use its increased graphics power to run older games at higher framerates through a feature called FPS Boost.

FPS Boost is available in select games from the Xbox 360 and Xbox One libraries. In most cases, FPS Boost will bring games up to 60 frames per second when played on Xbox Series X, but some will go all the way up to 120 frames per second. While FPS Boost is turned on by default for many games that support the feature, some games have to run at a decreased resolution to hit that 60fps mark. In those cases, FPS Boost won’t be turned on by default, but you can see how to turn it on in the video embedded above.

You can also see a complete list of games that support FPS Boost by checking out Major Nelson’s blog. He keeps an updated list of FPS Boost games there, so you can quickly tell which of your older titles support the feature. FPS Boost is a great reason to revisit classic games that may have been stuck at 30 frames per second on release, but be warned: once you get used to playing at 60fps, it’s difficult to go back.

It can make older games look better, too

In addition to FPS Boost, the Xbox Series X offers a feature called Auto HDR. While many Xbox Series X games will support HDR, Auto HDR allows you to apply those visual improvements to older, backward compatible titles that didn’t support HDR at launch. Like FPS Boost, only a select number of backward compatible titles support Auto HDR, though a comprehensive list of games that support it is harder to find. 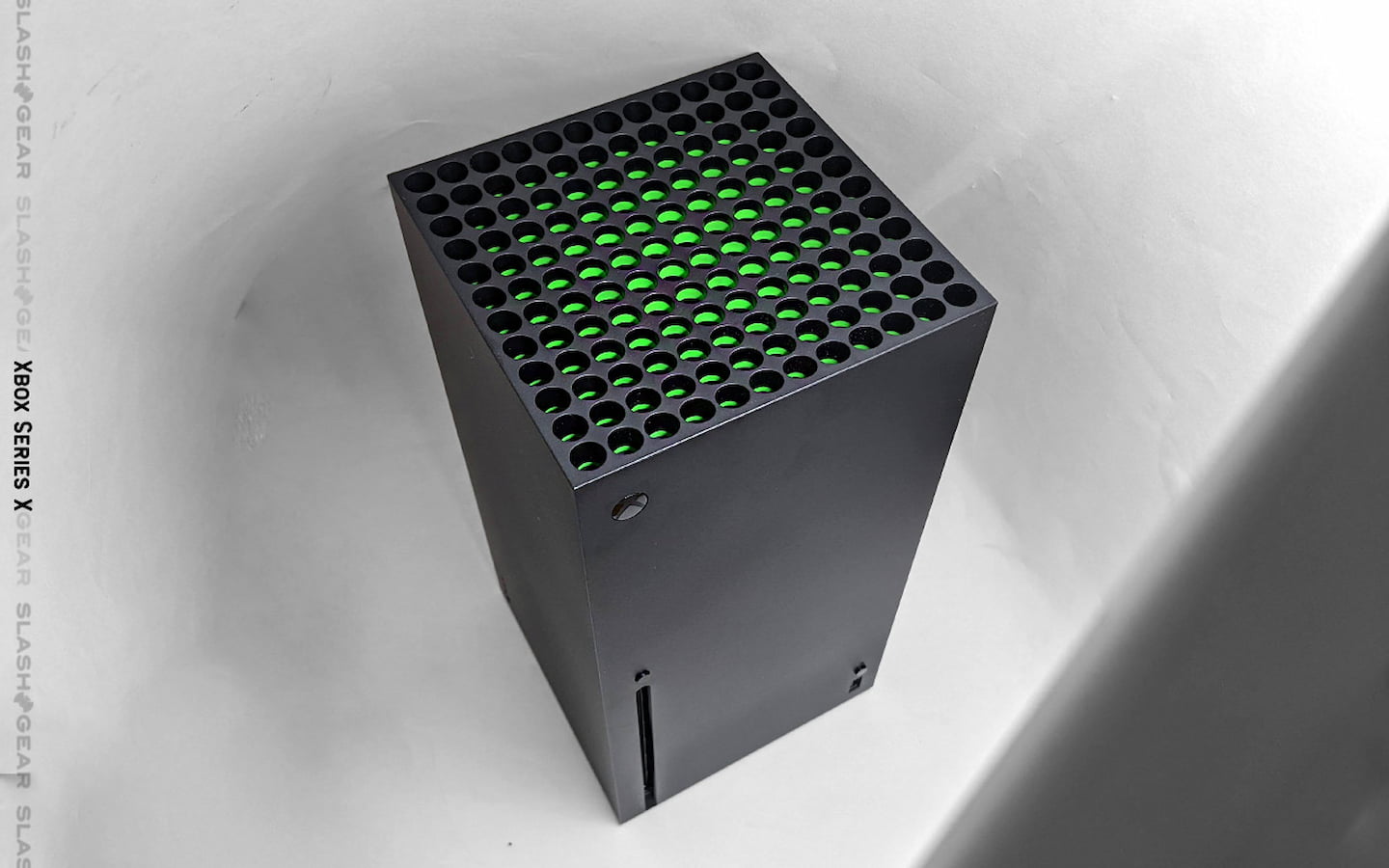 You can check to see if individual games support Auto HDR by opening the “Manage Game” settings for any title in your Xbox library and then selecting “Compatibility Options.” You’ll need a TV that supports HDR10 to use Auto HDR, and, as is the case with FPS Boost, most games that support Auto HDR will toggle the feature on automatically.

While Auto HDR isn’t going to improve the graphics in the backward compatible games you play, it will make them look better, with deeper blacks and more vibrant colors just like any other HDR media. It’s a nice touch that elevates backward compatible games, so if you have a TV that supports HDR10, be sure to play with Auto HDR turned on when you dive into your classic games collection.

Use Dolby Vision to take HDR one step further

Standard HDR is a great addition that helps games look better, but if you’ve got a TV that supports Dolby Vision, you should know that Xbox Series X supports it, too. Microsoft rolled out official Dolby Vision support for the Xbox Series X|S consoles back in September, but unfortunately, not every game will support the feature. Microsoft says that, in all, around 100 games support Dolby Vision, though that number only stands to increase in the future.

You can see some examples of how Dolby Vision improves the standard HDR experience in the trailer we’ve embedded above. Keep in mind that the TV you’re using must support Dolby Vision itself before you can use this feature. You can check to see if the TV has this support through your Xbox by hitting the Xbox guide button, then going into Settings > General > TV & display options > 4K TV details.

If your Xbox tells you that your display does indeed support Dolby Vision, you can turn it on by going into Settings > General > TV & display options > Video modes > Dolby Vision for Gaming and tap into the improved HDR that comes with it.

Don’t throw out your old controllers 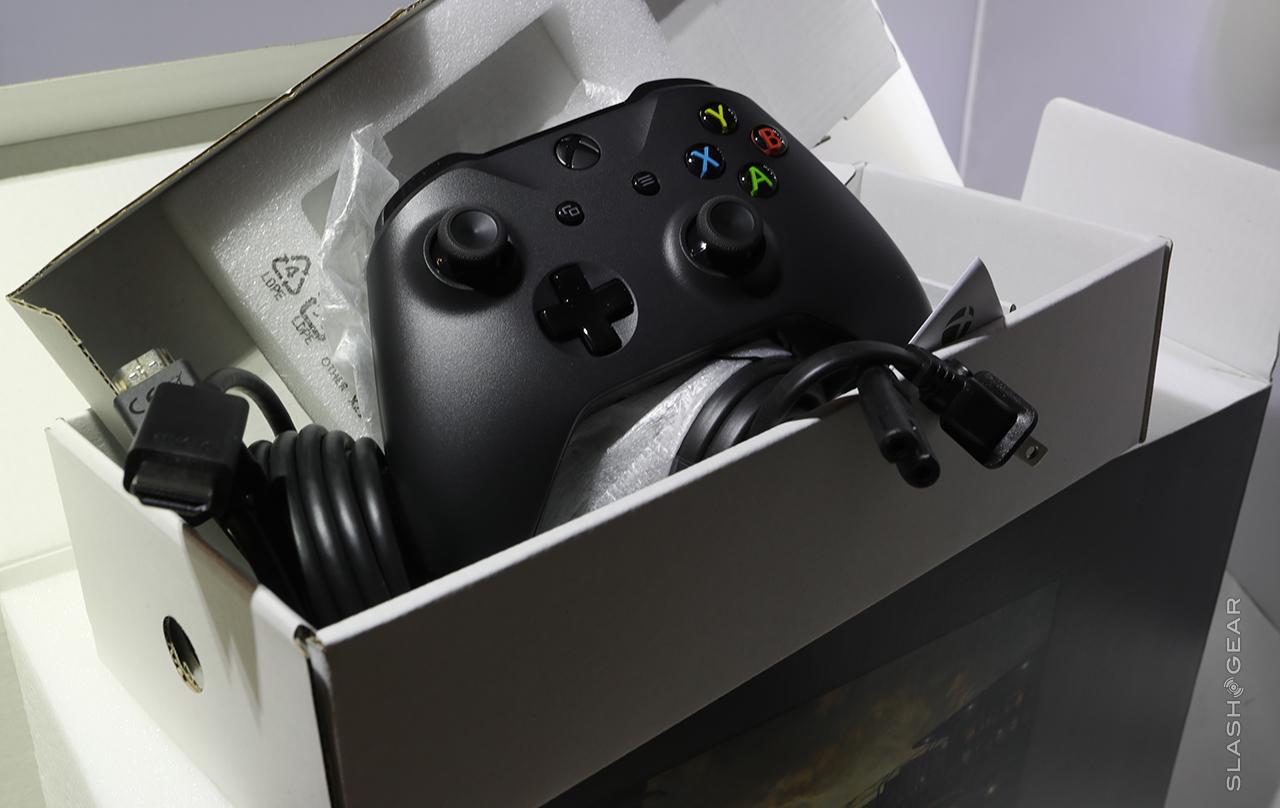 Even though the Xbox Series X ships with a slightly redesigned controller that borrows some elements from the Xbox Elite Controller, you can also use your old Xbox One controllers with the Series X, as well. It doesn’t stop at controllers, either, as many Xbox One accessories will work with Xbox Series X. Have an old Xbox One Stereo Headset you want to keep using? It’s compatible. The same goes for the Xbox One Chatpad, believe it or not.

In a big win for accessibility, the Xbox Adaptive Controller is also compatible with the Xbox Series X, so you can bring your accessibility setup into the new generation without having to change anything. If you have an Xbox Wireless Controller that you love (perhaps one that was made with Xbox Design Lab?), you can keep using that with Series X hardware. Sadly, the Xbox One Kinect sensor is one of the previous-gen accessories that aren’t compatible with Xbox Series X, so it looks like Kinect is well and truly dead.

One of the coolest things about the Xbox Series X is the SSD it’s packing. Like the PS5, the Xbox Series X has a speedy internal SSD that cuts back significantly on loading times. There’s even an expansion slot on the back of the console that can be used with Seagate’s Expansion Cards, which come in 512GB, 1TB, and 2TB sizes and are just as fast as the internal SSD. 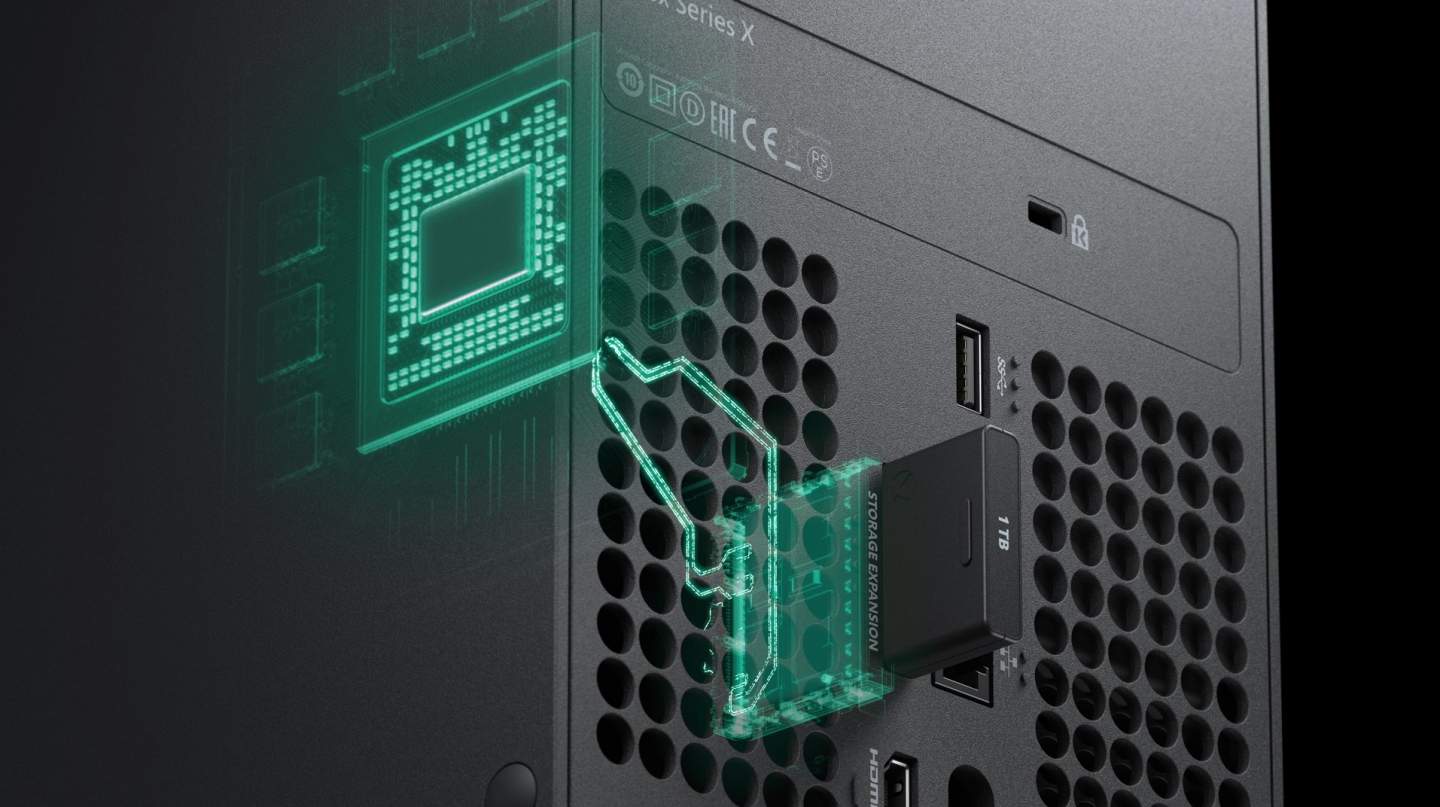 In addition to those expansion cards, the Xbox Series X also supports USB 3.1 external hard drives and SSDs with one major caveat: Xbox Series X games need to be installed on either the internal SSD or one of those Seagate Expansion Cards in order to boot. So, with that in mind, what use is an external HDD?

Kick it into night mode and dim the lights

If you’re a night owl who, say, shares a bedroom with someone who’d rather sleep than be kept up by your late-night gaming habits, then Xbox Series X’s night mode is worth looking into. Not only can you use it to dim the light coming from the display, but you can also use it to dim the lights on the Xbox controller and the console itself, even turning them off completely. 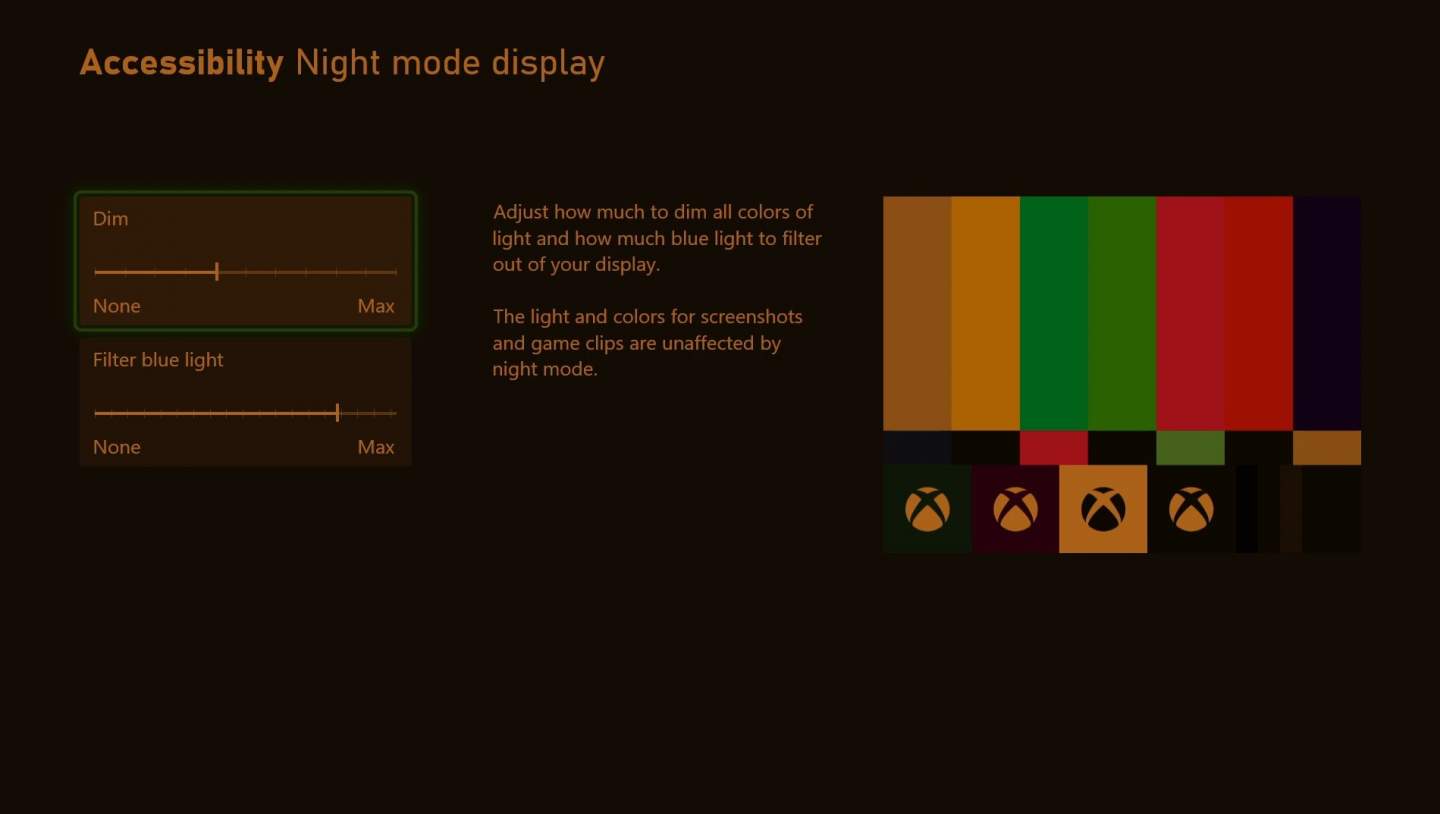 Night mode has a surprising number of options to it, allowing you to filter blue light to extreme levels or schedule night mode so that it’s automatically enabled and disabled at certain times each day. Even better is that any screenshots or video clips you take while night mode is enabled will appear as normal despite whatever settings you may have active. You can customize your night mode settings by going to Profile & System > Settings > Accessibility > Night mode.

Stream games to your phone or computer

Microsoft already offers game streaming through Xbox Game Pass Ultimate, but did you know that you can also stream local games from your console to another device over the internet? Through the oft-overshadowed Xbox Remote Play feature, you can do just that and stream games that are installed on your Xbox to a phone or a PC. 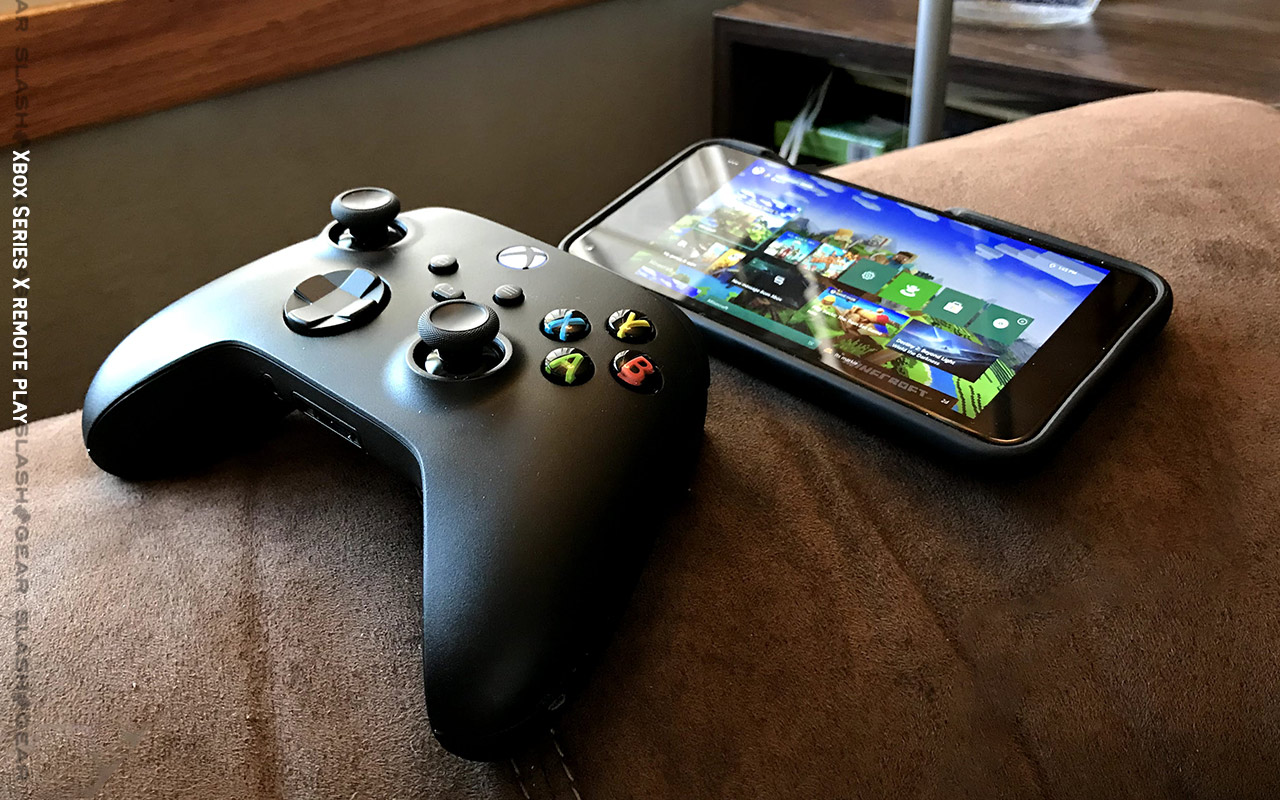 You’ll need several things to get going with Xbox Remote Play, starting with a smartphone or tablet running either Android 6.0+ or iOS 10+ or a PC running Windows 10 or 11. You’ll obviously also need an Xbox Series X|S (or an Xbox One), and an Xbox Wireless Controller that connects through Bluetooth. Microsoft also recommends a 5GHz internet connection with 10Mbps download speeds or faster.

If you’ve got all of that, then all you need to do is download the Xbox app on the device you want to stream to and follow the setup instructions for Xbox Remote Play. Do that, and in no time, you’ll be streaming your local games library and dodging the $14.99 fee to stream games from the cloud via Xbox Game Pass Ultimate.

The Xbox Series X is an impressive console not just from a hardware standpoint, but from a features standpoint as well. We already knew that the Xbox Series X would play games well, but with the features listed here – and assuming you’re lucky enough to find Xbox Series X stock – you can elevate the experience beyond that of mere gaming consoles.