There are a myriad of standards when it comes to pairing your smartphone with an In-Vehicle Infotainment (IVI) system. Android users are most familiar with Android Auto, a Google-made app that runs off of your phone and projects a driving-optimized UI onto the car’s built-in dashboard. Tesla, however, doesn’t support any such projection mechanism on its electric vehicles.

Tesla’s feature-rich dashboard is powered by a custom Linux distribution, which is tightly integrated with the car’s hardware components. While the modding community has yet to discover a way to completely replace it with Android, Tesla car owners can finally enjoy the Android Auto experience, thanks to a new app called TeslAA. 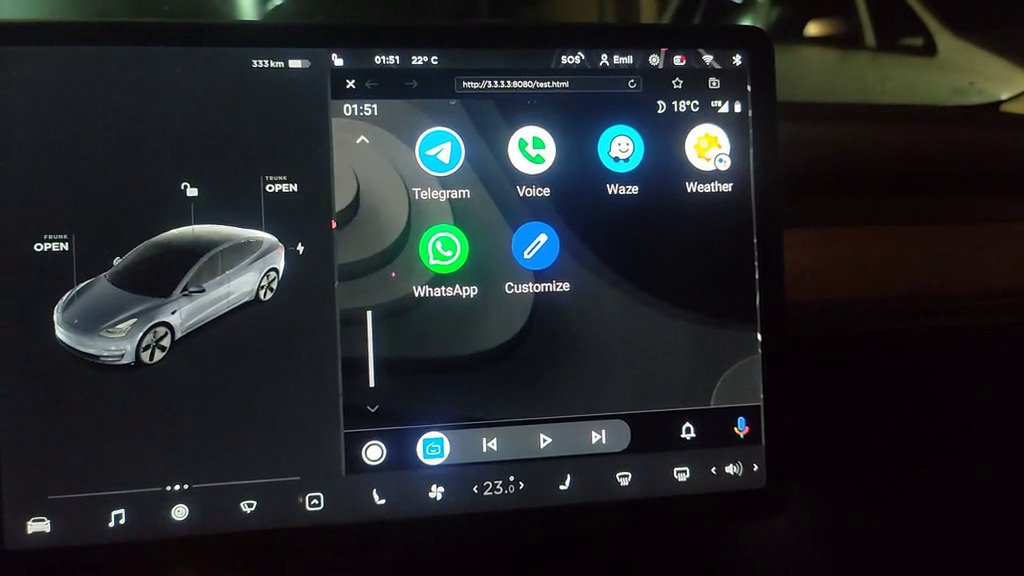 The solution is the brainchild of XDA Recognized Developer Emil Borconi, who is known for his works on the AAWireless project. Emil gave us an early glimpse of TeslAA back in June this year. Since then, the app has gone through a long beta testing phase and it is now available for everyone.

The workflow of TeslAA is quite straightforward. Upon installing the app on your phone, you need to connect the phone to your car via Bluetooth. Next, connect the Tesla Wi-Fi to your phone’s hotspot and head over to www.androidwheels.com using the Tesla browser. If everything goes right, you should be able to see the Android Auto screen on your center console.

Under the hood, TeslAA streams the Android Auto interface from your smartphone to the Tesla dashboard’s integrated browser via a local VPN interface. In case you’re facing any issue with the VPN setup, you can also opt for manual routing and set the phone’s IP to 3.3.3.3 for TeslAA to work. According to the developer, the application works best with Tesla models that support Netflix, YouTube, and Disney+.

There are, however, a few bugs that you need to consider. These include the stream becoming unresponsive after switching to reverse and the car disconnecting from the Wi-Fi hotspot when your phone loses signal for a long time. Nonetheless, the current implementation is sufficient to mirror some of the best Android apps to your Tesla’s dashboard.

TeslAA is priced at $4.99 and can be downloaded from the Google Play Store. If you own a Tesla vehicle and you’re interested in the Android Auto experience, be sure to check out the app.

The post This app lets you run Android Auto on a Tesla over the browser appeared first on xda-developers.