There are many Windows 10 tablets on the market, and it can be hard to sort through all the rubbish, especially if you rely on one to work from home. But we love Windows, and we love tablets. More importantly, we want you to be using the best you can buy. Here’s our list of best Windows tablets. 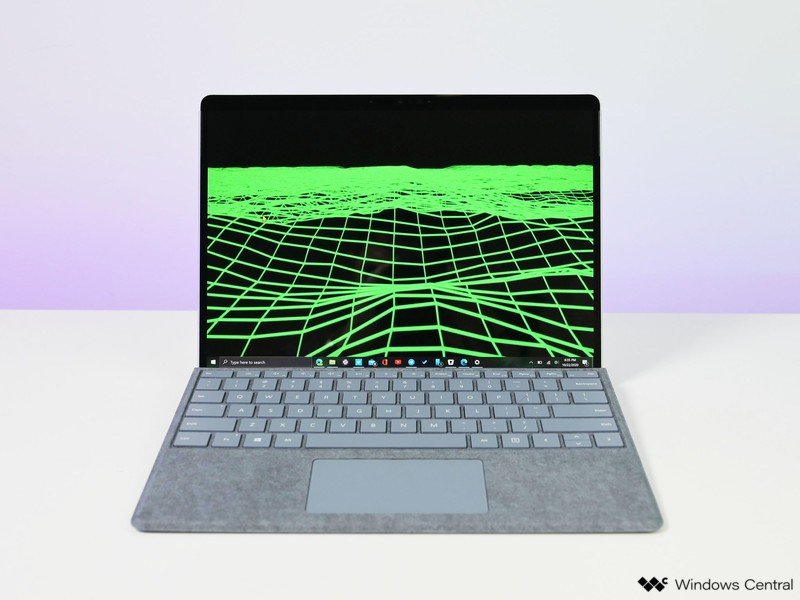 The Surface Pro X is everything we’ve ever wanted out of a Windows 10 tablet. Rocking a custom-built Microsoft SQ1 or SQ2 ARM processor on the inside, this is a device that has LTE built-in and instantly wakes when you tap the power button, just like a tablet should. It has a huge 13-inch display with a screen resolution of 2880×1920 for crisp and clear image quality. It has super thin bezels along the sides and a slim 7.3mm chassis with a built-in kickstand.

Ports include two USB-C and one Surface Connect port for fast charging. It also has an upgradable SSD, so if you ever need to swap out your drive for a new one, you can do just that without having to break open the entire device to do so. Battery life is pretty good, with usage lasting around 7-8 hours on a single charge. Thanks to the ARM processor, it consumes little to no battery when you put it to sleep. So it should get you through a day just fine.

You can get the Surface Pro X configured with either 8GB or 16GB of RAM, and 128GB, 256GB, or 512GB of storage out of the box. Like any other Surface Pro, it also has an optional pen and keyboard accessories, with support for wireless charging the pen inside the keyboard cover itself.

This is our pick for the best Windows tablet as it’s the closest thing to a real tablet, something that we think can rival the iPad in form factor and functionality. 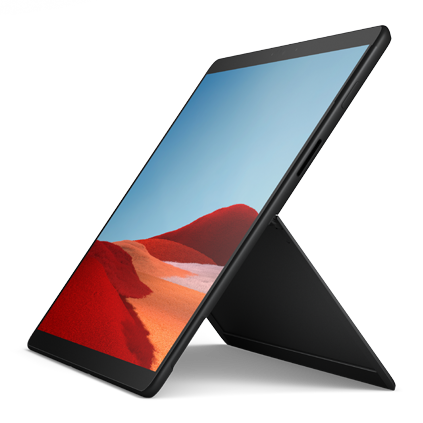 A device that does it all

If you want something that lasts all day, is incredibly thin, and is versatile enough to be both a laptop and tablet, the Surface Pro X is the one to get. 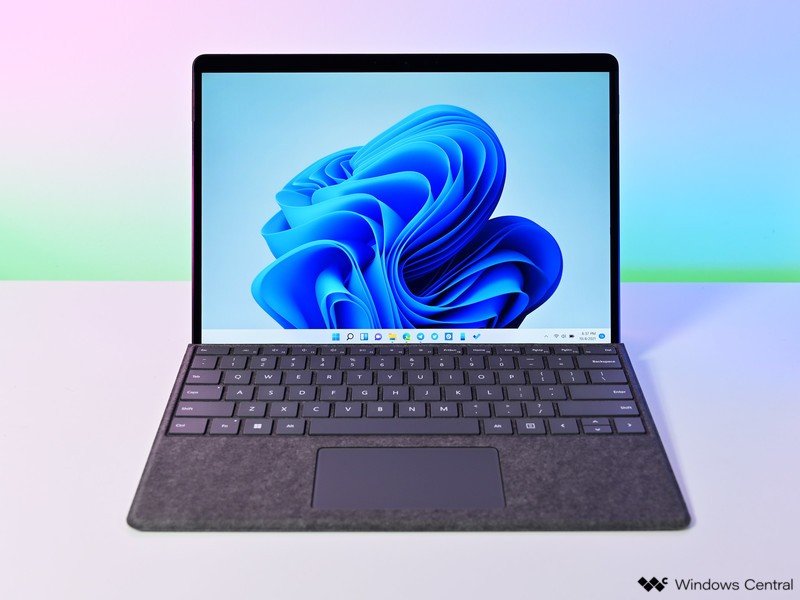 Featuring an incredible 120Hz, 2736×1842 3:2 display, 11th Gen Intel Core i5 or i7 processors, up to 16GB RAM, and a 1TB SSD, you can’t go wrong with the Surface Pro 8 for photo editing and more, now featuring the same great design found on the Surface Pro X, but with more power under the hood.

This is the tablet for those who don’t just browse social media and check email. It can be obscenely powerful if you configure it to be as such. Even on the entry-level model, you should be able to get by with medium to heavy multitasking, a few light edits in Photoshop, and home video editing at 1080p.

It’s considerably more expensive than the Surface Go. Just like the Surface Go, it also doesn’t come with the Type Cover bundled at that price. Considering the display’s size, you’re going to want to buy the Type Cover to take advantage of everything this tablet has to offer.

Battery life on the Surface Pro 8 can depend on the tasks you’re doing. It should get you through a workday with no problem, however, thanks to the 11th Gen Intel processors that are much more battery efficient in routine tasks. It also finally has a USB-C port, meaning you can charge either with Microsoft’s proprietary Surface Connect port or through USB-C. It supports fast charging too!

Microsoft also has an LTE model available for sale, though that product is for commercial customers only. The Surface Pro 8 features Intel’s 11th Gen processors, paired with Intel’s new Iris Xe graphics for a huge boost in GPU performance. Get this if you need to do video editing or light rendering work while on the go. 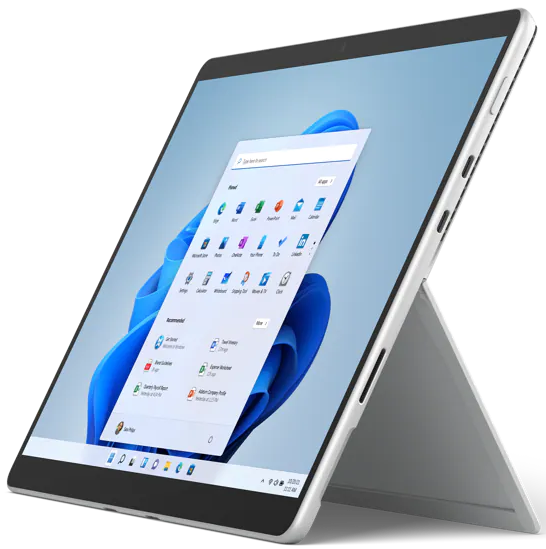 The Surface Pro 8 is a true 2-in-1 that feels like a tablet, with the bonus of becoming a laptop when you need it. 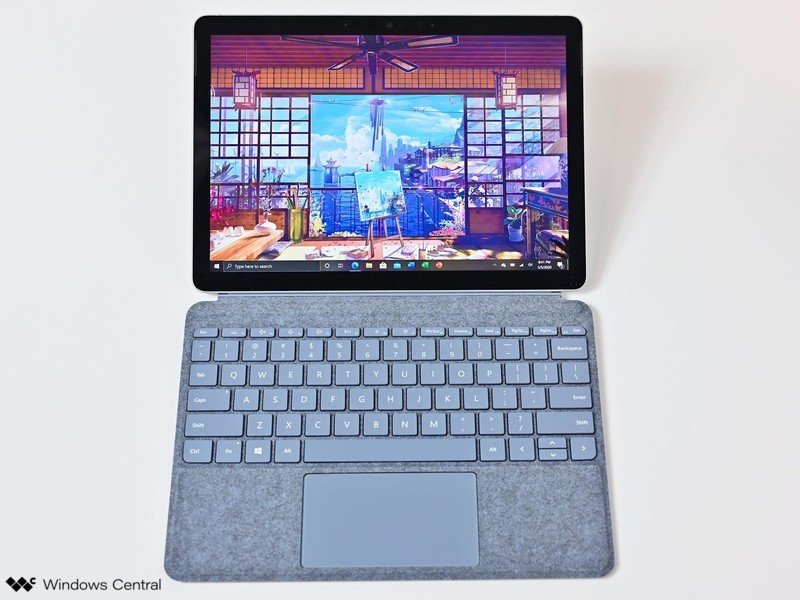 The Surface Go is the successor to 2018’s Surface Go and features a 10.5-inch high-quality display in the same magnesium chassis you know and love.

On the inside, it features an Intel Pentium GOLD or Intel Core M3 processor with up to 8GB RAM, but it remains quiet while running. It has a truly stunning display, and it has support for Surface Pen for all the handwriting and drawing you might want to do. If needed, you can choose a higher-end model with more storage if you need the extra room. There’s also a microSD card expansion slot for additional storage when needed.

The best bit about the Surface Go 3 is that it’s super cheap compared to other Surface products on the market. Don’t be fooled by its affordable price, though, as this is still one incredibly premium tablet. The price does start to climb if you’re interested in the additional accessories for it. The Type Cover will set you back about a hundred bucks, as will the Surface Pen, so costs increase accordingly.

Battery life is okay. It’ll get you through a working day, but don’t expect any miracles. It gets about 6-7 hours at most, mostly because this isn’t a Windows 10 on ARM device, meaning it’s using an Intel processor that isn’t as battery efficient. 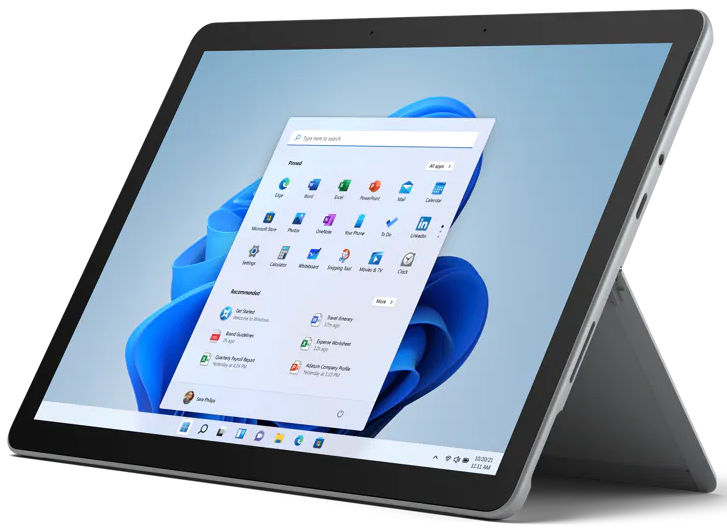 A small PC that does it all

If you like Surface Pro but are looking for a smaller PC, look at Microsoft’s new Surface Go. It’s cheaper too. 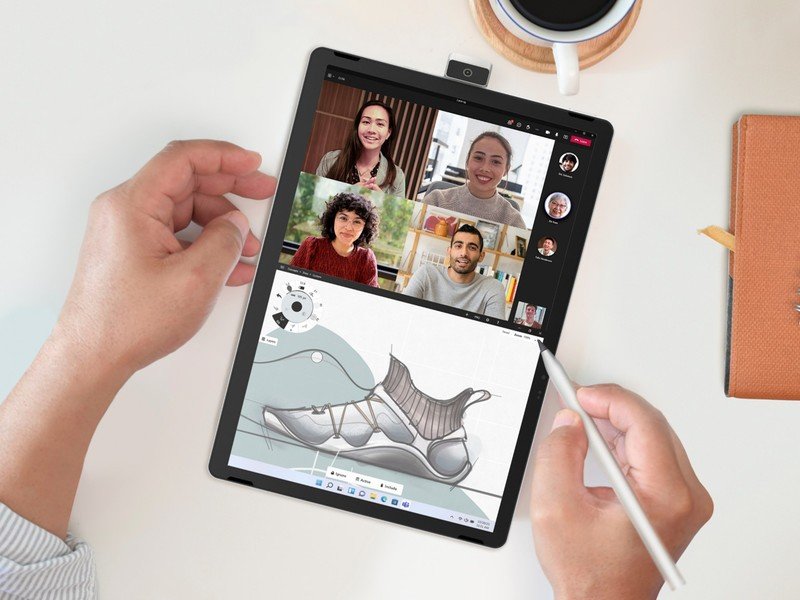 The HP Tablet 11 is a small form factor slate designed for the workplace. Featuring an Intel Pentium N6000, 8GB RAM, and a beautifully crisp 11-inch display with a 2.1K resolution. It also supports pen input, and you can buy an optional keyboard accessory to turn it into a laptop if you need it.

The big selling point of this tablet is that it supports a webcam accessory that can be attached in any orientation. So, instead of being limited to the landscape orientation that most tablets are fixed to when you want to use the webcam, this device lets you attach a webcam to the device in portrait mode as well.

Plus, because the webcam is detachable, it features a much higher quality sensor at 13 megapixels, which also features Auto Frame for automatically keeping you or a group of people in frame.

The device also has a built-in kickstand, meaning you can prop up the device no matter where you are. 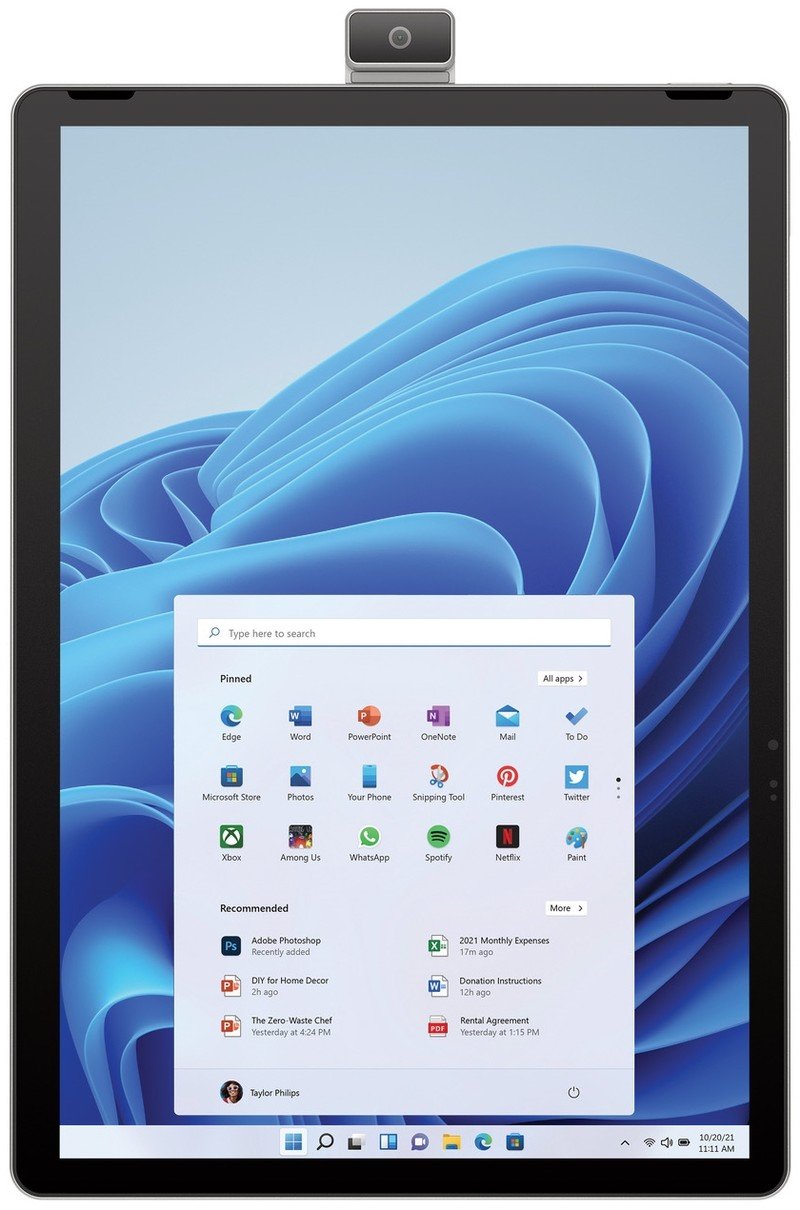 A small PC for business use

If you like the idea of the Surface Go, but want something designed primarily for businesses with a versatile webcam setup, this is the device to get.

There are many different tablets with Windows out there, but choosing what’s best for you can be difficult. We think the Surface Pro X is the best all-around Windows tablet you can buy right now, featuring the same instant-on and LTE capabilities found in devices like the iPad while still being versatile and productive enough to get work done.

Of course, the Surface Pro X isn’t for everybody, which we why we also recommend the Surface Pro 8 for those who need more power. And if you’re looking for something small that doesn’t break the budget, the Surface Go 3 is for you. If none of these appeals to you, be sure to check out our picks for best Windows 11 PCs on the market right now too!