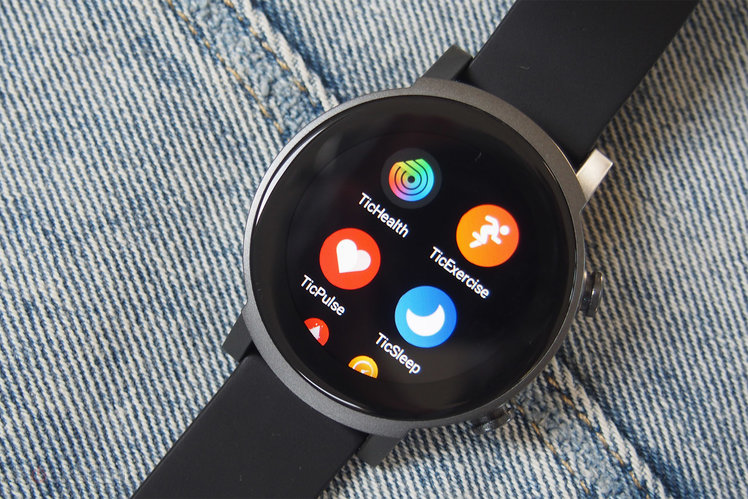 The TicWatch E3 is the mid-range smartwatch option in Chinese outfit Mobvoi’s collection, with the TicWatch Pro 3 sitting up at the top and its budget-tastic TicWatch GTH down at the other end.

With the E3, you’re getting a lot of the features included in the Pro 3, including built-in GPS, Mobvoi’s own suite of health and fitness apps, and it all runs on Google’s Wear OS platform.

It’s also powered by Qualcomm’s Snapdragon Wear 4100 processor and, along with the Ticwatch Pro 3, will be upgraded to Wear OS 3 – which has already featured on the Samsung Galaxy Watch 4. So while the TicWatch E3 could end up being a great smartwatch in the future thanks to this OS upgrade, is it a good smartwatch to own right now?

The Ticwatch E3 packs a nicely-sized 44mm round watch case that’s made from polycarbonate and glass fibre. It weighs in around 32g when you factor in the accompanying 20mm strap. 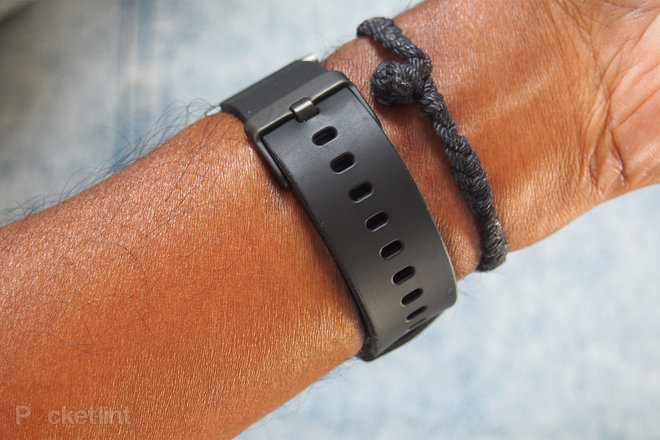 That case is available in a Panther Black colour, which is really a very matte grey shade that offers a smart but safe look. You can swiftly remove the strap to drop in something a bolder and more vibrant than the black silicone number it comes with.

Breaking up that pretty simple look are two physical buttons on the right side of the case, which can be used to get you into the app screen and offers a shortcut to Mobvoi’s own exercise tracking features.

That’s accompanied by a 2.5D glass screen, which does help to give the E3 a more aesthetically pleasing look. Front and centre is a 1.3-inch LCD display, which makes it a smaller screen than the one on the TicWatch Pro 3. It’s also lower resolution and it isn’t the AMOLED kind like you’ll find on the Pro, but it’s a bright and colourful display overall – and it’s one you can use in always-on display mode if you want the screen awake 24/7. 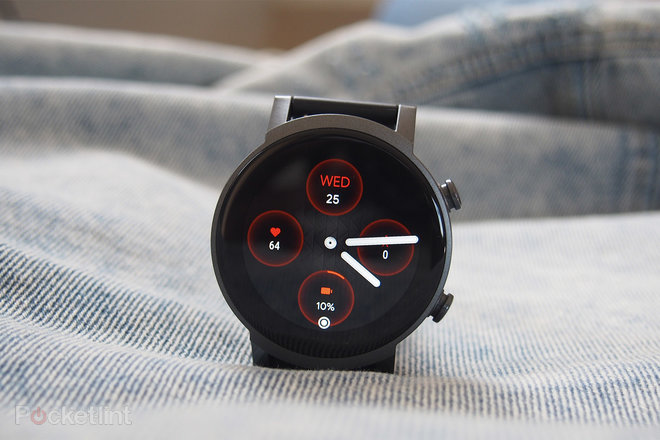 Like the majority of Mobvoi’s TicWatch devices, this is a smartwatch you can go swimming with and leave it on when you jump into the shower in the morning. That’s because it carries an IP68 rating.

The E3 runs on Google’s Wear OS 2, giving you features like access to the Google Play Store, Google Assistant, notifications, and there’s NFC on board to make payments with Google Pay. Mobvoi also adds in some of its own user interface (UI) elements, such as swapping the standard Wear app screen for its own, which we think is much nicer to interact with and feels better optimised to the round display.

Ultimately though, you’re using the same Wear gestures to get around, like swiping left to see Mobvoi and Google’s Tiles (widgets), swiping up to see your stream of notifications, or swiping down to see those quick settings. Using Wear OS is fine, but continues to lack the extra polish you’ll find on something like Apple’s watchOS.

That could maybe change with the new version of Wear OS, which is being built by Google and Samsung, and it has been confirmed that the E3 is capable of running it and will be updated at some point either in 2021 or 2022.

The key here to the E3 getting that upgrade seems to lie with what’s powering it. It runs on Qualcomm’s Snapdragon Wear 4100 platform, which few Wear OS watches actually include, with the TicWatch Pro 3 the other notable watch to include it. That’s accompanied by 1GB or RAM and 8GB of storage, which as a package keeps things running nice and smoothly on the E3 – and we have zero complaints about the overall performance..

The combination of Google and Mobvoi software elements work nicely on the whole. What will be interesting is how Wear OS 3 will change that. Will Mobvoi’s presence be as strong? Particularly when Samsung and Fitbit will have strong influences on the future of the platform. Only time will tell. 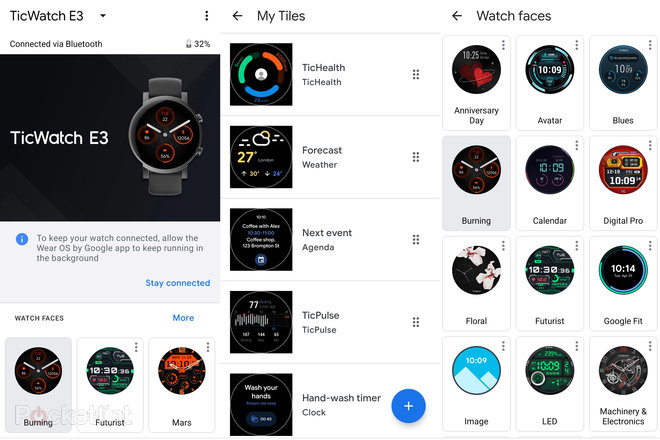 What doesn’t work quite so well is the need to have two companion apps. You need Google’s own Wear OS to set things up, plus the Mobvoi one. The latter has been given a welcome clean-up and, as a result, is a much nicer app to use – but is still very clunky in places. Hopefully everything will eventually be brought into one unified app when Wear OS 3 arrives, which would make the experience of pairing, syncing, viewing data and tweaking settings a far more straightforward one.

The E3 has all of the key sensors on board to make it a potentially top notch smartwatch for tracking your health and fitness. In reality, it does a good enough job of it, but there’s certainly room for improvement.

On the sensor front, you’re getting a PPG optical heart rate monitor for measuring heart rate 24/7 and during exercise. There’s also an SpO2 sensor to measure blood oxygen levels throughout the day and night, but it’s not a feature designed for medical use. You have staple wearable motion sensors to track indoor exercise and pool swimming – with GPS, Glonass and Beidou satellite systems supported to accurately capture outdoor running and cycling sessions. 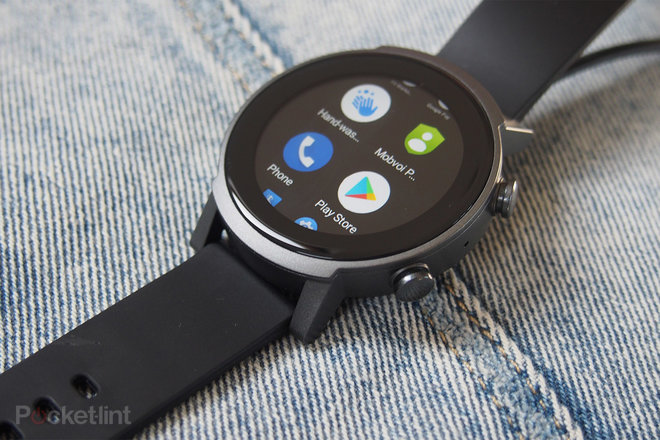 For sports tracking, you can pick out a third-party app from the Play Store or opt for Mobvoi’s own workout app. It offers 20 professional modes and that includes the likes of running, cycling (indoor and outdoor), indoor rowing, and more niche pursuits Tawekwondo and Badminton.

It’s also introduced a new HIIT mode where you can create HIIT workouts to follow on the watch. There’s a group of exercises to pick from and while Mobvoi does offer automatic exercise recognition support for some modes, it’s not capable of counting your squats and burpees. It’s a well designed mode, though, and with HIIT training a big fitness trend, it’s good to see Mobvoi better cater for it.

On shorter 20-30 minute outdoor runs, the E3 held up well on the GPS accuracy front against the Garmin Forerunner 245 and running metrics like average pace was largely reliable. However, heart rate performance isn’t perfect, usually pushing into another heart rate zone compared to a Garmin HRM-Pro chest strap monitor. 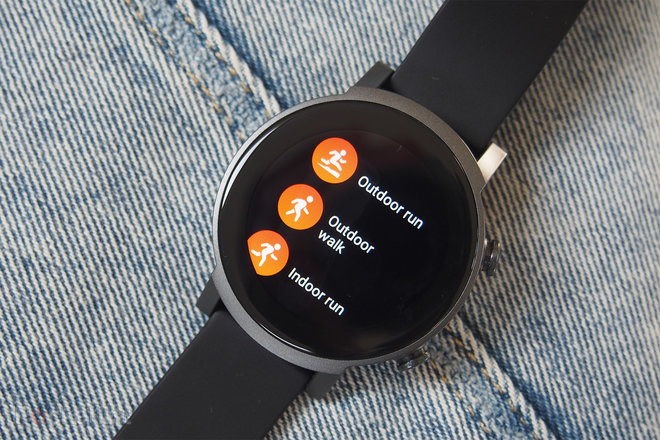 If you care more about fitness tracking, you can count your steps here from Mobvoi’s own apps or Google Fit. There’s sleep monitoring here too with Mobvoi’s TicSleep 2.0 offering a breakdown of sleep duration and sleep stages – including REM sleep, which is tied to memory and learning. On the accuracy front, it offered similar daily step counts to a Garmin fitness tracker and core sleep stats held up against the Fitbit Sense.

For health monitoring, Mobvoi offers a collection of apps that will help you monitor heart rate, blood oxygen levels, noise exposure, stress and make use of guided breathing exercises to get you back to a calmer state. There’s also a new TicCare option in the Mobvoi app that lets you keep a closer eye on health stats from other TicWatch users in your family. 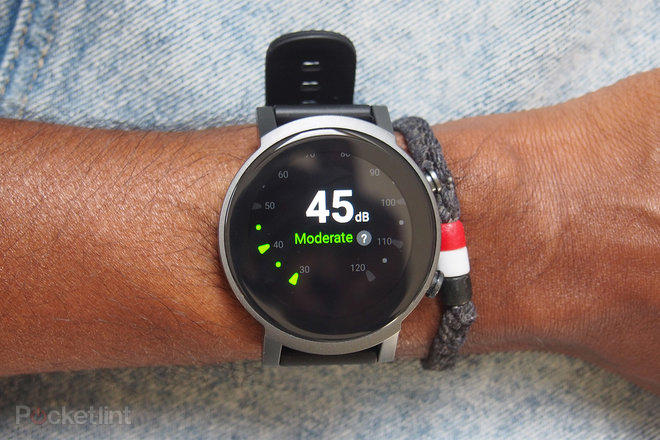 The TicHearing app – which uses the onboard microphone to measure sound in your environment – felt a little on the sensitive side recognising relatively quiet noises as much louder ones.

The E3 therefore feels like a better fit as a fitness tracker than a sports or health watch based on our experience.

Wear OS smartwatches on the whole don’t promise much on the battery front – and that doesn’t change with the E3. Its battery capacity is good for one day. You could squeeze out a bit more than that, but you’d have to be more restrictive with the features you use – things like using GPS and having the screen in always-on mode. 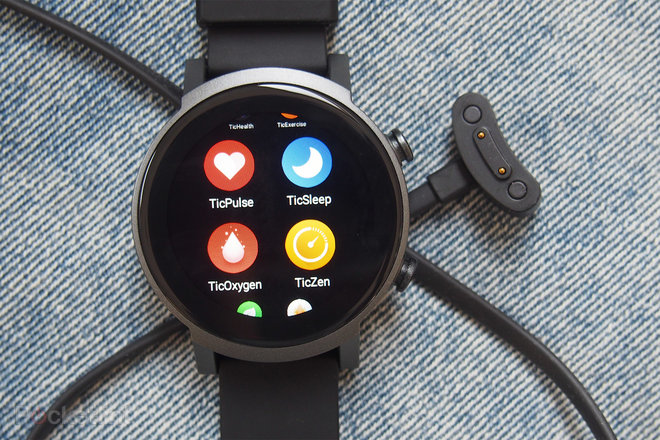 We saw a drop-off of around 50-60 per cent on most days – and that was including a tracked workout. If you take it to bed for sleep tracking too, then we found it was running low the next morning.

Mobvoi does offer its Essential mode, which kicks in when battery drops below five per cent. That switches the watch to just a single screen where you can view the time and date and will still monitor heart rate and step count. It’s better than some power saving modes you’ll find on other smartwatches, but ultimately we’d prefer if this watch could squeeze out more than just a day’s full use in full smartwatch mode.