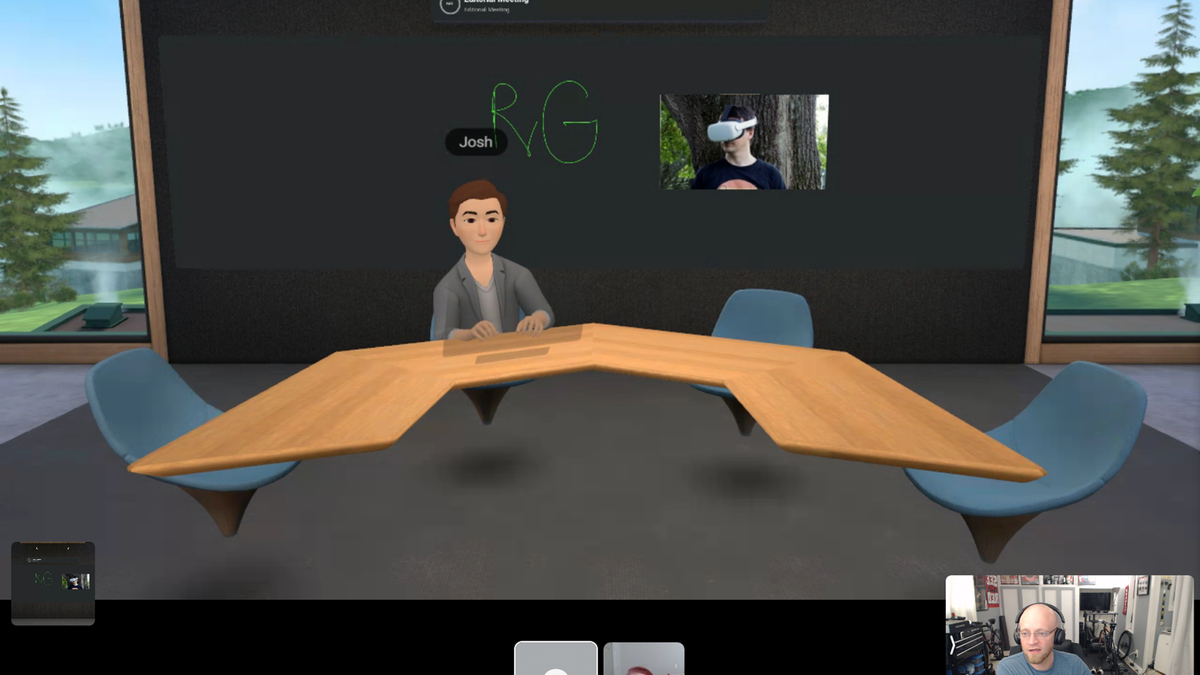 In the past year, we’ve relearned what it means to have a meeting and embraced new forms of communication through services like Zoom. But video calls lack the presence of in-person meetings. Facebook’s new virtual reality Horizon Workrooms almost fixes that problem. But (almost) no one will use it.

When Facebook announced its new virtual reality (VR) Horizon Workrooms meeting app, I immediately had to try it. I’m bullish on VR, and believe it’s here to stay and will only get better. But if we’re honest, VR’s primary use-case right now is gaming, not productivity. And Facebook is trying to change that.

As the name suggests, Horizon Workrooms promises to create a virtual meeting group where people can gather in a VR conference room and have a team meeting. It has note-taking abilities, a whiteboard, and anyone without a VR headset can participate in a Zoom-like call. 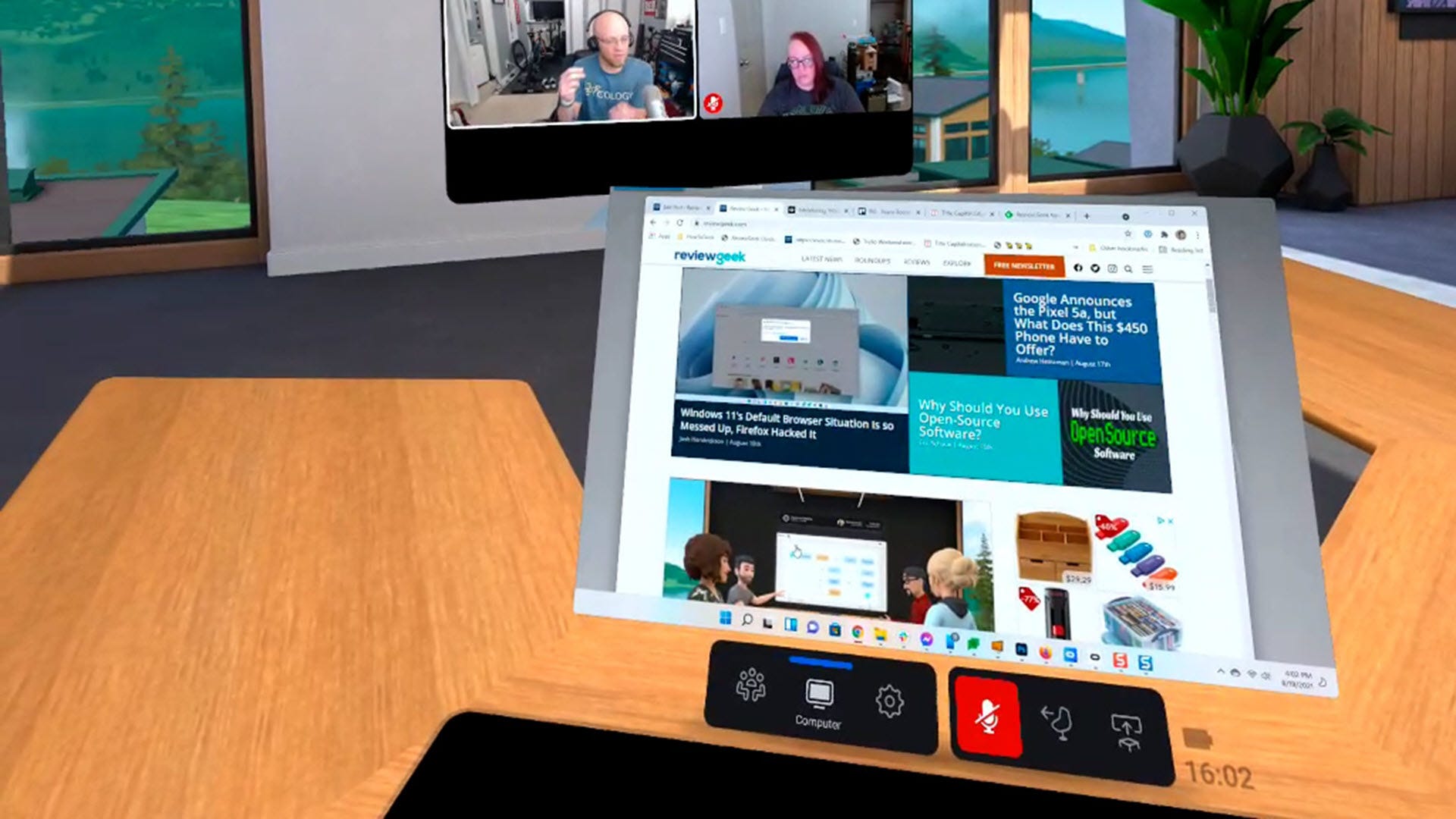 At Review Geek, we’ve always worked remotely, so hosting meetings over Google Meet is already old hat. But still, I gave Horizon Workrooms a try. I wasn’t even too worried about the fact that I’m the only one with a VR headset, thanks to that video call feature, but the whole thing got off to a clunky start.

You have to sign up for Workrooms over on the Oculus site. Despite having an Oculus account linked to my Facebook account, I had to create a new account for Workrooms. Then set up a custom meeting room (though you can join one as well). After that, I installed the app on my Oculus Quest 2 (sorry, OG Quest owners, you’re not invited) and then updated that app. And then, I had to pair my Quest to my Workroom, which required looking at my browser on my desktop, memorizing a few digits and letters, then jumping in VR to type them. Finally, I had to update my PC’s Oculus software and install a remote desktop app to link my PC to my quest.

But once you get through all that, everything else is a breeze. You can add notes, files, and links from the webpage, and they’ll automatically show up in the VR meeting room. Anything you put on the schedule becomes a button to click in the VR app. And for anyone who doesn’t want to be in VR, you can just send out a link to join.

And here’s the thing, Horizon Workroom works surprisingly well. Inside, I could actually see my computer, which means I could still get my work done. And thanks to Oculus Quest’s passthrough capabilities, I could even see my keyboard and actual hands. Workroom can bring it in without passthrough if you have the right keyboard, but honestly, I liked seeing my hands while typing.

My co-workers showed up in a Google Meet-style floating window, and everyone could mute themselves. They couldn’t see any of the files or notes I set up for the meeting, which is a big miss, in my opinion. To get around it, I posted one of the pictures on the whiteboard, because oh yeah, there’s a giant whiteboard. 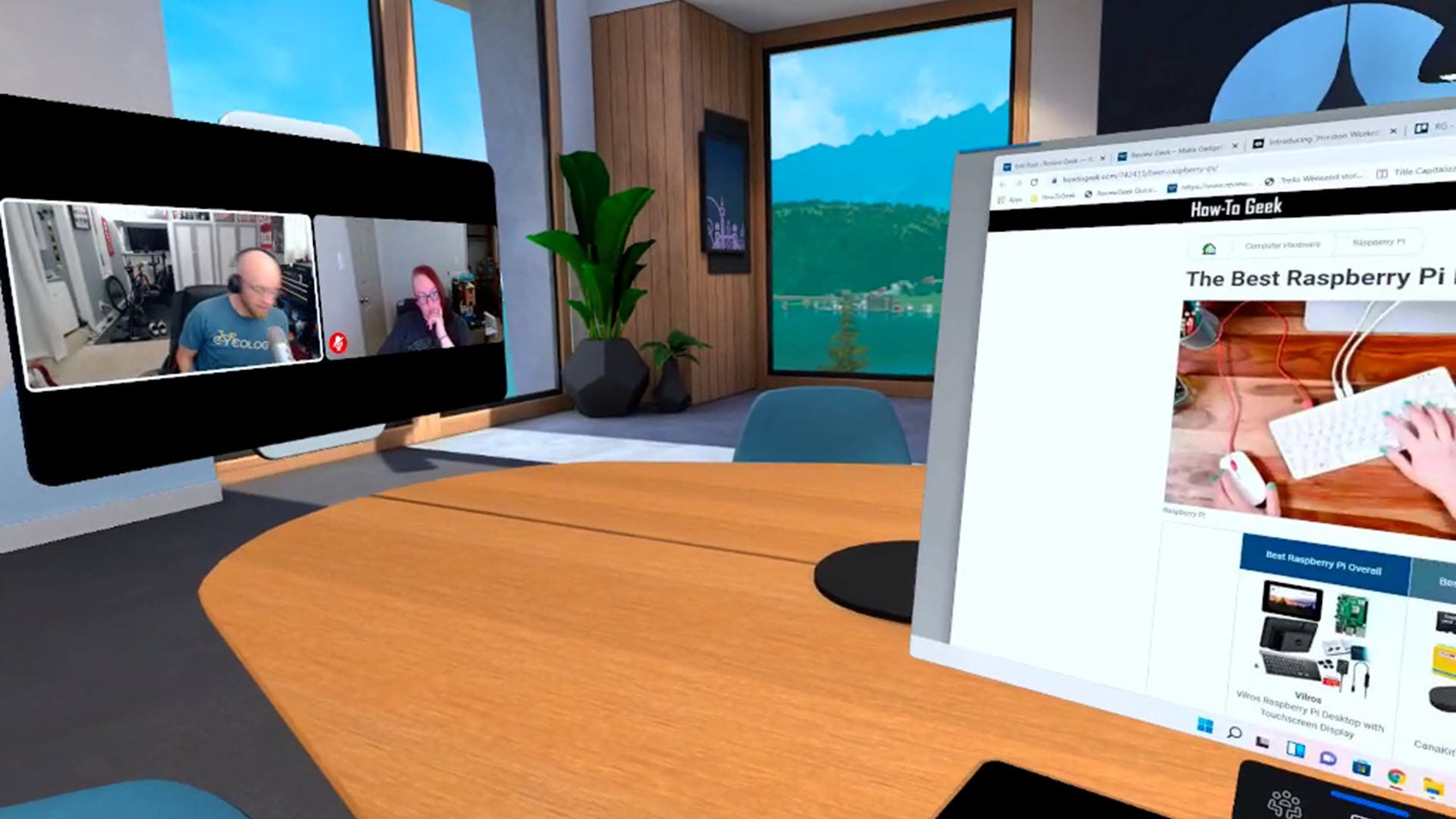 You can either teleport over to it or turn your desk into a mini-version of it and anything you write there will show up on the big board. And all of that is made easy by using a system similar to the Oculus Quest guardian system to define the layout of your actual physical desk. But writing on the whiteboard wasn’t easy because you have to hold your controller in a funky position and use the bottom of the grip as the “pen.”

Still, I can see where the entire experience would be more immersive if you convinced other people to attend inside VR. Workroom uses spatial audio, so when a person speaks, it sounds like it’s coming from where they virtually are in the room. For me, voices came out of the floating video call window, and when I turned my head, the direction of the sound adjusted appropriately.

But for everyone on the video call and not in VR, the entire experience was very disjointed. We needed to screen share at one point, but only people present in VR can do that. But more disconcertingly, I sound like me, and my hands move around and gesture somewhat appropriately while I talk. But I don’t look like me. My avatar is a crude (and legless!) cartoony approximation, and it didn’t click for the viewers. It didn’t help that when I moved from the desk to the whiteboard, my avatar got stuck in a praying position. Or that avatars don’t have legs.

Other small issues came up too throughout the hour-long meeting. The floating window subtly resized itself every often, getting an inch smaller or bigger. You use hand gestures for most of the controls, and an errant gesture caused me to mute myself at one point. And while it was nice to see my computer screen in the video, that experience needs work.

For one, it didn’t play well with my multi-monitor setup. I have two portable monitors, and one is “upsidedown,” with the view adjusted due to space and cord needs. Well, in the VR system, it only displays as upsidedown. The text is somewhat blurry, and I had trouble resizing my windows to fit the virtual screen. But once I got everything just so I could check Slack, browse the web, and work on this article. You can choose from two screen sizes, but while I preferred the larger option it blocked the video call in certain seats and room layouts. I wanted to move the video call window, but you can’t.

But still, I typed some (not all) of this article in the Workroom. Not all because eventually, the VR headset started to hurt. An hour is the max I can do, and then the squeeze against my temples and the eye glare just gets to me. Luckily, I scheduled the meeting and listed it as an hour, so the system started giving reminders at 30 minutes and 45 minutes. That kept us on track, which is a nice touch.

Surprisingly and shockingly, Horizon Workroom does what it claims to do. And I’m willing to overlook the issues because this is a beta. A beta that works shockingly well. It’s the first VR conference room experience I tried that I might be willing to attempt again. But the problem is everyone else. I’m the only one in my team with an Oculus Quest 2, so everyone else would have to attend through a video call. And I don’t think I (or anyone else) can convince those people to shift from a working solution (like Zoom or Google Meet) to a strange, unnecessary VR solution that won’t let see or share files or screens.

And while everything seemed seamless to me, it was disconcerting to everyone else to talk to a cartoon that didn’t even move its mouth correctly. It’s just too big an ask, despite the low barrier of entry. If you’re in the VR experience, Horizon Workroom feels like the future. But if you aren’t, it feels clunky. And once I took off my headset and realized that just an hour in gave me a bad case of VR face… I had to agree. It looks like the future, but I can’t see how we’ll embrace it.