Ubuntu 20.10 releases today. An Ubuntu fan may get excited about the new features it brings.

It doesn’t mean you won’t find new things in Ubuntu 20.10. There are some performance improvements, new Linux kernel and visual changes thanks to the latest release of GNOME 3.38 (and other desktop environments in various other Ubuntu flavors).

I am listing the features in the default GNOME edition of Ubuntu 20.10. You’ll find the same visual changes that you have already seen in the GNOME version 3.38 release.

Ubuntu 20.10 has the purple shade Groovy Gorilla theme default wallpaper. However, I took a liking for the yellow wallpaper of an old camera roll (nostalgia perhaps). I have used the same wallpaper in most of the screenshots here. 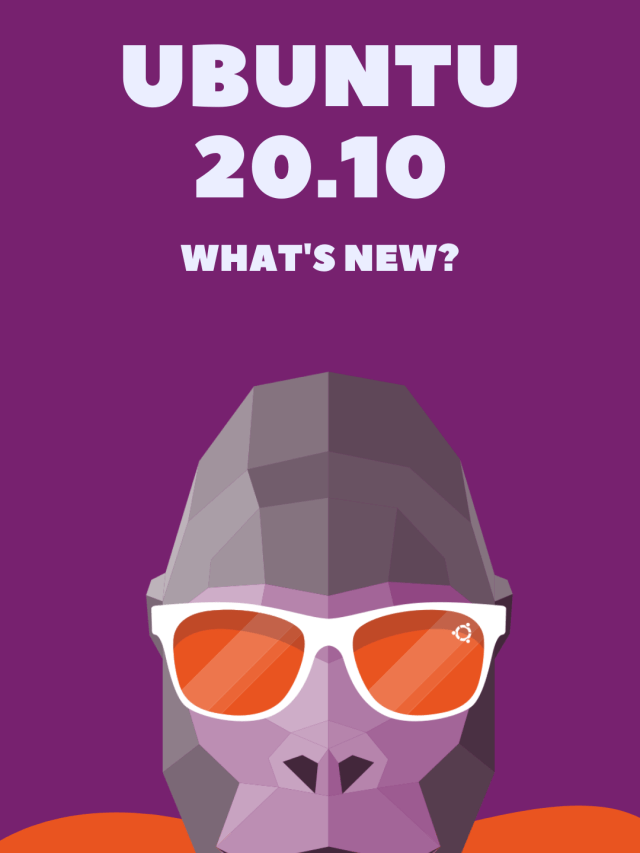 1. Calendar events in the message tray

One of my favorite features in this release. Want to see all the tasks and events (birthdays, meetings, reminders) due today? It’s right there in the message tray.

To use this feature, you should have added some events in the GNOME calendar app that comes preinstalled on Ubuntu.

Don’t worry. You don’t necessarily need to create the events, reminders manually in GNOME calendar. If you add online accounts from the settings, you can sync your Google, Microsoft or Nextcloud calendars without any efforts.

Not a path-breaking stuff but you don’t need to install GNOME Tweaks just for displaying battery percentage on the top panel. This option is now available in Power settings.

Ubuntu 20.10 makes it a bit easier to share the Wired Network through hotspot. Instead of sharing the WiFi hotspot with a password, you can now generate a QR code that can be accessed by mobile devices and connect to the hotspot.

Small but useful. You can now see a muted mic icon on the top panel if your microphone is muted during an audio/video call or while recording audio.

Handy feature, isn’t it? I think we should also have a similar feature for the webcam so that is easier to ascertain that the camera is off or on during videoconferencing.

P.S. The mic icon didn’t turn to mute when I used the mute switch on my Sennheiser USB headset.

5. Restart option in Power Off menu

A tiny change again. It is now easier to restart Ubuntu with one less mouse click as you can see the restart option under the Power Off in the status menu.

If you have a new laptop with fingerprint reader, you’re in for a treat. Ubuntu 20.10 has better support for fingerprint login.

BTW, if you like such newer methods of authentication, you probably would like to know about setting up face unlock in Ubuntu with some extra effort.

You could already drag and drop applications in the menu to group them. This is improved a bit as you can now position the icons as per your preference in the application group.

Also, the group will only display some icons at one moment. Additional icons are displayed on the next page.

Ubuntu finally now has Raspberry Pi support with a few ifs and buts. You can use Ubuntu 20.10 arm64 image on a Raspberry Pi 4 with at least 4 GB of RAM. The micro SD card should be at least 16 GB in size.

In Ubuntu 20.10, nftables is now the default backend for firewall. The legacy iptables tool is being replaced.

If you are not aware, iptables and nftables are CLI tool for creating, managing firewall rules on Linux. Both tools are developed by the same organization. The newer nftables tries to streamline the complicated command structure of iptables.

There are plenty of screenshot tools available for Ubuntu. Tools like Flameshot are rich in features but nothing beats the default GNOME screenshot tool in the simplicity.

The GNOME screenshot tool has been revamped and it has a clean new look now but no new features as far as I see.

You can compare the looks of the screenshot tool in the image below. Just move the pointer let or right.

As always…Newer version of popular software

You can always make some effort to install the newer version of a software but it is a lot more convenient when it is available from Ubuntu’s repositories.

LibreOffice has a smoother new look in Ubuntu 20.10 thanks to version 7.

We are working on a video to show you Ubuntu 20.10 features in action. Here’s the raw footage. I’ll replace it with a more polished version in some hours.

It depends on you. If you like to have the latest features and do not mind taking the trouble of upgrading Ubuntu version, you can upgrade to Ubuntu 20.10 or do a fresh installation.

Here are a few things that you might or might not be aware of but good to know anyway:

If you are using Ubuntu 20.04 and you want to upgrade to Ubuntu 20.10, you should set the notification for any new version in the Software & Updates tool.

What do you think of the features in Ubuntu 20.10? Do you think it is good enough to make you jump to 20.10? What features you would have liked to see here? Please share your opinion in the comments section.