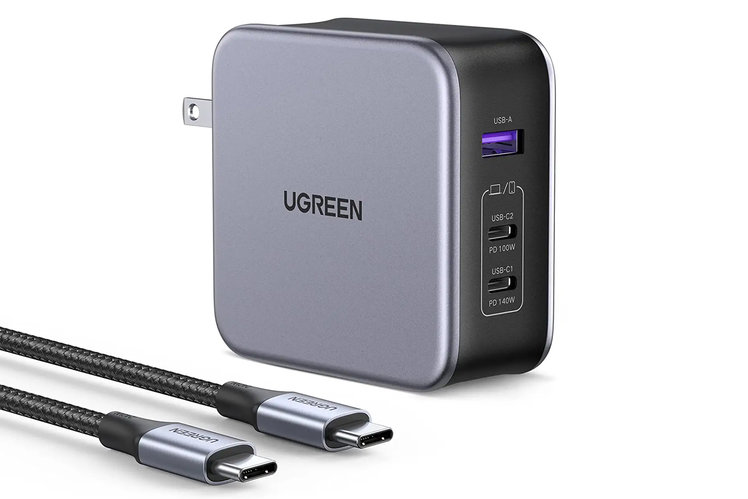 Fast charging is a hugely convenient benefit that allows you to get your devices ready to go sooner than with traditional chargers. However, not all fast chargers are built the same.

When compared to each other, some chargers will still seem slow. Plus, there are other issues such as the size, and the old problem of being able to charge only one device at a time. And even if you could charge multiple devices, chances are the charging time would drop significantly.

Recently, UGREEN announced a product that will address all those issues – the Nexode 140W GaN Charger. A solution that’s destined to change the game in charger manufacturing.

What is the Nexode 140W GaN Charger?

The Nexode 140W is the latest in the line of chargers from UGREEN. As the name indicates, the device has a charging power of 140 watts, which might sound too much even for charging a powerful laptop.

But the massive power output makes sense once you discover a great feature of the Nexode 140W – it can charge three devices at once.

The charger features one Type-A USB port and two Type-C output ports. In other words, you can plug in two laptops simultaneously and add a phone on top of that. This means that a single Nexode 140W charger is enough for two people at an office to keep their machines powered throughout the day.

While these are the basics of the Nexode 140W, the charger has much more to offer. Let’s look at what makes it stand out from the rest.

The Nexode 140W has built-in technology that allows it to charge devices more effectively. If you plug a laptop into a standard wall charger, it would charge up to 35 per cent in half an hour. On the other hand, the Nexode 140W would bring the computer to 56 per cent within the same time.

Best of all, the charger’s performance doesn’t drop off significantly once each of its three output ports is taken. This is due to the advanced charging protocol used in this device.

When only the Type-A port is used, it gives out a maximum output of 22.5 watts. The first Type-C port puts out 100 watts, and the second, which is the most powerful, gives out 140 watts.

Once both Type-C ports are taken, each will have a maximum output of 65 watts. And when you use the Type-A with either Type-C ports, Type-A will give out 22.5 watts while any Type-C will have an output of 100 watts.

Finally, when all three ports are in use, Type-A will remain at 22.5 watts, the first Type-C will put out 45 watts, and the second Type-C will provide 65 watts.

This charging protocol allows the Nexode 140W to be as efficient as possible. At the same time, it’s exceptionally good at heat management. All this is due to one revolutionary piece of technology: the GaN chip.

The GaN chip in the Nexode 140W charger is more efficient than standard silicon-based variants. It allows for better energy efficiency as the charger can use over 92 per cent of the total energy it gets from the socket.

This means less energy waste and, as a result, less heat, keeping the charger cooler while it works. But the Nexode 140W doesn’t rely on the chip alone for temperature control.

The charger also features a system called the Thermal Guard. It reads the temperature 800 times per second, ensuring the charger doesn’t overheat. In addition, another system – the UGREEN Power Dispenser – adjusts the output for maximum battery protection.

The future of fast chargers

The Nexode 140W has every feature you could want from a fast charger. With this product, UGREEN used breakthrough technologies to create an eco-friendly, powerful, and versatile charger.

UGREEN has been in the digital solutions and hardware industry for a decade. During that time, the company garnered more than 40 million loyal customers worldwide. You can learn more about UGREEN at UGREEN.com.

The Nexode 140W is available on Amazon US as well as directly from UGREEN via its own website. It will also be available in the UK from 5 October!