Skip to content
Home Technology News USB 3.2 Gen 2x2 State of the Ecosystem Review: Where Does 20Gbps USB Stand in 2020?

USB has emerged as the mainstream interface of choice for data transfer from computing platforms to external storage devices. Thunderbolt has traditionally been thought of as a high-end alternative. However, USB has made rapid strides in the last decade in terms of supported bandwidth – From a top speed of 5 Gbps in 2010, the ecosystem moved to devices supporting 10 Gbps in 2015. Late last year, we saw the retail availability of 20 Gbps support with USB 3.2 Gen 2×2 on both the host and device sides. Almost a year down the line, how is the ecosystem shaping up in terms of future potential? Do the Gen 2×2 devices currently available in the retail market live up to their billing? What can consumers do to take advantage of the standard without breaking the bank? Western Digital recently launched the SanDisk Extreme PRO Portable SSD v2 with USB 3.2 Gen 2×2 support. A hands-on review of the SSD sets the perfect background for discussing the above aspects.

The USB Implementers Forum (USB-IF) has been hard at work in bringing new features into the world of USB – In the last five years or so, we have seen the emergence of Type-C, and multiple updates to the USB standard itself. USB4 has been making a lot of news recently (thanks to its implementation in Intel’s Tiger Lake, as well as the fact that Intel lent its high-performance Thunderbolt 3 specifications for USB4). However, this piece deals with the most recent specification update prior to that – USB 3.2 Gen 2×2.

In mid-2017, USB-IF announced USB 3.2 to bring 20 Gbps bandwidth support to the Type-C ecosystem. Type-C supports two sets of high-speed differential pairs. Only one set is used for traditional 10 Gbps operation (in USB 3.2 Gen 2), with the other set used for supporting alternate modes such as DisplayPort. USB 3.2 Gen 2×2 allows this set also to be used for data transmission (when the alternate modes are not needed). This doubled the available data bandwidth to 20 Gbps. A year down the road, ASMedia demonstrated a PHY for the 2×2 operation. At MWC 2019, USB-IF made public the branding strategy for the the different USB 3.2 flavors – SuperSpeed USB for USB 3.2 Gen 1 ( 5Gbps ), SuperSpeed USB 10Gbps for USB 3.2 Gen 2, and SuperSpeed USB 20Gbps for USB 3.2 Gen 2×2. This was followed by the announcement and demonstration of the ASMedia ASM3242 Gen 2×2 controller for hosts and the ASMedia ASM2364 Gen 2×2 to PCIe (NVMe) controller for devices at Computex 2019. At the same show, Phison also announced a single-chip USB 3.2 Gen 2×2 / NAND flash controller, the PS2251-17.

Premium motherboards with USB 3.2 Gen 2×2 ports built-in started appearing towards the end of 2019 with the introduction of the AMD TRX40 chipset, followed later on by the Intel Z490 boards. All these boards enabled the feature using the ASM3242 controller. Vendors also launched stand-alone PCIe 3.0 x4 expansion cards to equip older PCs with USB 3.2 Gen 2×2 (SuperSpeed USB 20Gbps) ports. On the client devices front, initial demonstrations were carried out with USB 3.2 Gen 2×2 enclosures equipped with PCIe 3.0 x4 M.2 NVMe SSDs. Some of these enclosures have made it to the retail market. Vendors such as Western Digital and Seagate have also released external SSDs supporting the USB 3.2 Gen 2×2 standard in the last 12 months.

Consumers wanting to get into the USB 3.2 Gen 2×2 ecosystem can opt to build a PC with one of the TRX40 or Z490 boards supporting SuperSpeed USB 20Gbps. Building a new PC is only an option for a few – for an interface standard to take off, consumers need to either get the port in an off-the-shelf PC, or, have PCIe expansion cards that can be fitted into older systems. GIGABYTE was one of the first tier-one vendors announce such a card – the GIGABYTE GC-USB 3.2 GEN 2×2. However, the card is yet to become available for retail purchase. 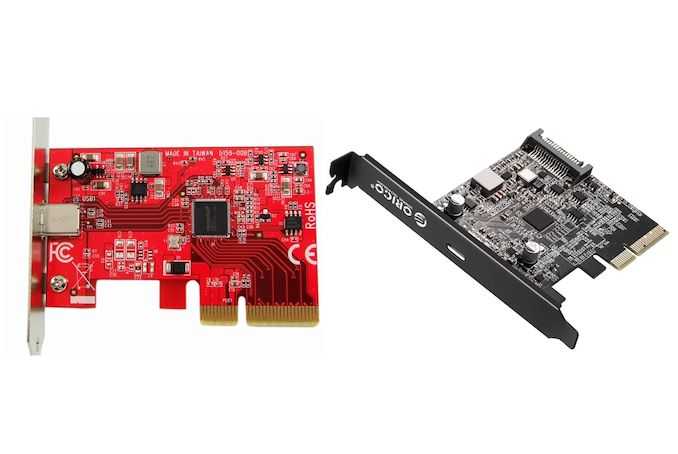 The currently available options for adding a USB 3.2 Gen 2×2 port to systems that don’t come with one built in are listed below: 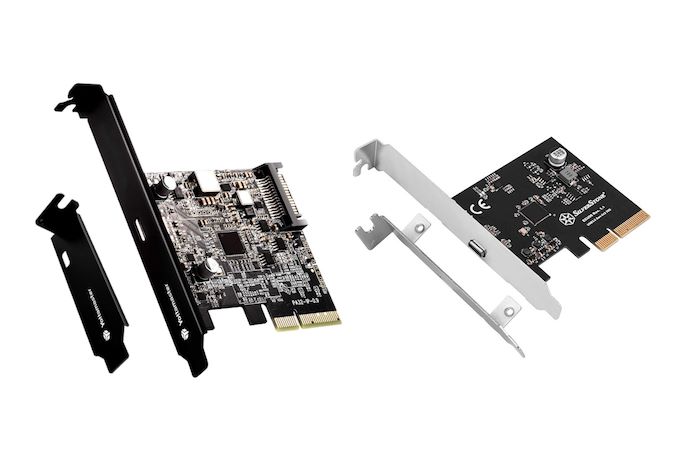 All these require a spare PCIe 3.0 x4 expansion slot in the computer. An interesting aspect to note is that the Silverstone ECU06 and the AbleConn PEX-UB159 do not require any external power. For reasons we haven’t taken the trouble to analyze, the ORICO and Yottamaster cards require external power supplied via a SATA power connector. This could be relevant in systems that do not have a spare SATA power connector (as described in the next section). The Yottamaster C5 and the ORICO PE20-1C both seem to use the same PCB, with just the branding on the bracket being different. Additionally, the PE20-1C product tag is printed on the C5 PCB. This is enough evidence to infer that they are both sourced from the same factory line using the same PCB design.

On the device side, one of the most economical ways to adopt USB 3.2 Gen 2×2 remains the purchase of an appropriate enclosure and a compatible SSD:

Coupling any of the above with a high-end NVMe SSD like the SK Hynix P31 (1TB / $135) or WD Black SN750 (1TB / $150, or 2TB / $310) should result in a speedy SuperSpeed USB 20Gbps external SSD for around 20¢/GB. Note that the SSDs mentioned here are specifically those that consistently maintain 1.5 GBps+ direct-to-TLC writes without a significant price premium.

The easier way out is to purchase an off-the-shelf external SSD. There are three options currently in the market, specified here in the order of retail availability date:

The SanDisk Extreme PRO Portable SSD v2 line will also have a 1TB model, but that will not be available in retail until later this year.

Unless one moves to the high-end of the capacity line with the 2TB models, the cost-per-GB metric (above 20¢ per GB) is simply not competitive against the SuperSpeed USB 10Gbps external SSDs that have taken over the market in the last couple of years. At the 2TB capacity point, excellent external SSDs of this type are available at less than 15¢ per GB, while the best that the above three families can offer is 0.175¢ per GB. As adoption increases, the price should go down, but right now, there is no denying that there is a premium. Is the premium worth it? We review selected components from the above list in an attempt to find the answer.

Western Digital had sampled a review unit of the WD_BLACK P50 (1TB version) earlier this year, but I had placed it at the bottom of my review queue for a couple of reasons. For starters, none of our direct-attached storage testbeds were SuperSpeed USB 20Gbps-capable. The other reason was that the WD_BLACK P50, despite its wide retail launch, appeared to be more of a technology-demonstration product, with the ecosystem for SuperSpeed USB 20Gbps still in its infancy. Last month, Western Digital doubled down on targeting the USB 3.2 Gen 2×2 device market with the launch of the SanDisk Extreme PRO Portable SSD v2. A review sample was also supplied along with the SanDisk Extreme Portable SSD v2, which was analyzed in detail last week.

Having two Gen 2×2 devices in hand, we felt that the standard was gaining market traction. To get started with the review, we reached out to a couple of the aforementioned expansion card manufacturers, and Yottamaster was the first to respond with a retail sample of the C5 expansion card. 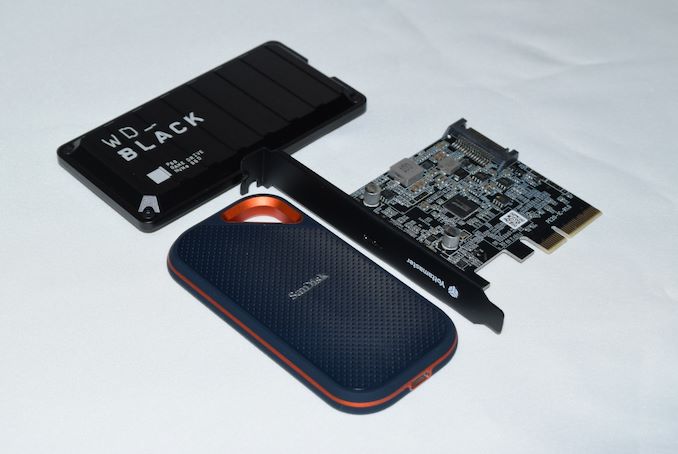 The rest of the review details the steps taken to set up an appropriate testbed for evaluation of USB 3.2 Gen 2×2 devices, followed by a discussion of the features and characteristics of the WD_BLACK P50 and the SanDisk Extreme PRO Portable SSD v2. A look at the performance numbers for various workloads – both synthetic and real-world, as well as accelerated playback of access traces – is provided. As customary, we also explore the worst-case consistency for typical DAS workloads, thermal performance and power consumption numbers. In the last section, we provide some concluding remarks while touching upon the outlook for the USB 3.2 Gen 2×2 (SuperSpeed USB 20Gbps) standard.