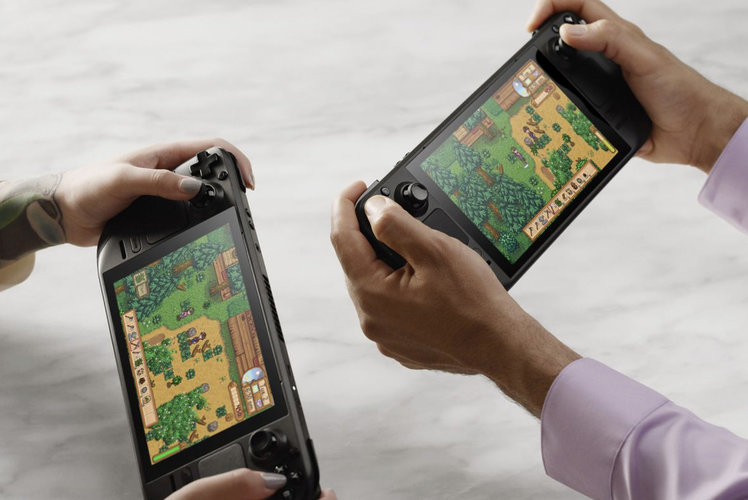 Valve’s long-rumoured Steam Deck is now official. Well, almost. The Switch-like handheld gaming device was due to release later this year in the US and the UK, but Valve delayed the launch by two months.

Here’s what you need to know.

What is Valve Steam Deck?

Ever wish you could play more of your favourite PC games on the Switch?

Well, in July 2021, Valve unveiled Steam Deck, a handheld PC for gaming that could shake up the portable market in a big way.

With the Steam Deck, you can access your entire existing Steam library immediately upon logging in. It runs a modified SteamOS, allowing you to download and play games such as Doom Eternal. It also lets you install and operate PC software on it, including a web browser, other game stores like the Epic Games Store, and video-streaming services. It even connects to a monitor and gaming peripherals like a keyboard and mouse, or a controller.

And, because of its cloud-saving feature, you can seamlessly pick up game save files between your Steam Deck and PC. 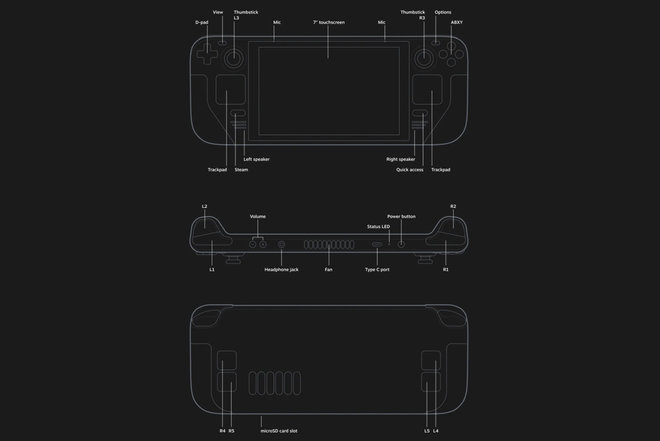 What does Valve Steam Deck feature?

In terms of power, every Steam Deck offers the same power 16GB of LPDDR5 RAM and an AMD APU containing a quad-core Zen 2 CPU with eight threads and eight compute units’ worth of AMD RDNA 2 graphics. There are three different storage tiers available, though: 64GB eMMC storage, 256GB NVMe SSD storage, and 512GB of high-speed NVME SSD storage. You can also expand the storage via microSD on any of the models.

The Steam Deck boasts 16GB of unified LPDDR5 memory, with a total of 88GB/s of bandwidth. The GPU will apparently have access to up to 8GB of that shared memory.

Other features include built-in mics, a gyroscope for motion controls, and a “40 watt-hour battery that provides several hours of playtime for most games”. Valve says the Steam Deck can charge and play at the same and will come with a 45-watt power supply.

We’ve also now heard that it’ll be targetting 30FPS on games as the minimum expected performance, although that’ll surely vary by title.

It has a USB-C port which offers external display support for up to two 4K monitors at 60Hz. The specs also mean that Steam Deck will support AMD FidelityFX Super Resolution allowing for upscaling similar to Nvidia’s DLSS.

Steam Deck has two thumbsticks and two Steam Controller-style trackpads beneath the thumbstick that can mimic the feeling of using a mouse. The front of the handheld machine also has ABXY buttons and a D-pad. Similar to the Switch, Steam Deck comes with two shoulder triggers on each side, and there are four back buttons (two on each side) for even more options.

Steam Deck offers access to the Steam library and runs a version of Steam OS that’s optimized for mobile gaming. The OS is actually based on Linux. In fact, Steam Deck can be used as a full-fledged Linux computer by more advanced users. Valve said you’ll be able to plug in a mouse, keyboard, and monitor – plus you can install PC software on it, browse the web, and use it to access other game stores. It features cloud saves for the syncing of files between devices, and it has a suspend/resume feature to force the device into sleep mode.

Other features include chat, notifications, and the ability to stream games to Steam Deck directly from your PC via Valve’s Remote Play feature.

Valve plans to sell a dock that you can use to prop up a Steam Deck to plug it into external displays or TVs. It’s not required, however, and also will release a little after the console, since it hasn’t been shown off yet. Valve said Steam Deck can be plugged into your TV, monitor, or “even your old CRT if you have the right cables.” The Stem Deck comes with USB-C ports that contain HDMI, Ethernet, and USB data, as well as Bluetooth.

On the FAQ pages, Valve has answered a number of burning questions:

Would Valve be interested in having any Steam Deck exclusive titles?

No, that doesn’t make much sense to us. It’s a PC and it should just play games like a PC.

How many sound channels does Steam Deck support?

We support two when using the onboard speakers, but we support multi-channel when using HDMI or Bluetooth.

Are there any plans to add 5G or LTE at this point in time?

No plans to add cellular, however, you can always tether to your phone.

How Much VRAM does Steam Deck have?

Steam Deck has 16 gigabyte of unified memory. One gigabyte that’s dedicated for the GPU, but depending on workload the GPU can access up to 8 GB.

Will Steam Deck performance be any different, depending on if it’s plugged in or if it’s running on battery?

We are focused on providing you the full performance available from the APU both on battery and when you’re plugged in. Our expectation is that performance is the same across the board in either configuration.

The Steam Deck will automatically run games in full-screen by default. However, if you drop to desktop, you can run games in windowed mode.

Will AMD FSR be incorporated into Steam Deck?

FSR is already available for some applications that support it. Games that already include FSR will work as is, but also FSR support will be included as part of an OS future release. Once that happens, games could potentially make use of FSR even if the games themselves don’t natively support it.

Definitely – you can play local co-op on the Steam Deck in a few different ways. You can hook controllers in via Bluetooth, or directly via USB. You can also play with Remote Play Together, where other players are on other Decks or PCs.

When will Steam Deck be available in more countries?

We’re still finalizing plans with a bunch of other countries and territories. Nothing solid to announce or confirm yet, but we can say that we’re working really hard on making Steam Deck available in Japan and Australia.

How much does Valve Steam Deck cost?

The models and their prices scale up based on your preferred storage and processing speed. 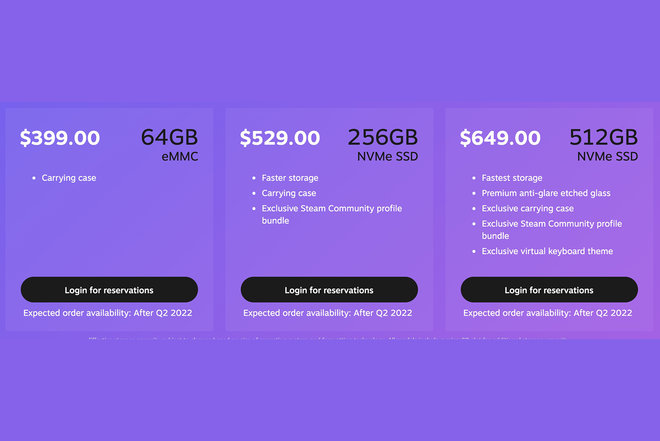 When will Valve Steam Deck launch?

According to the company’s blog and a tweet, Steam Deck will go on sale from 25 February 2022. Customers who have reservations will get an email notification on that day, and they’ll have three days to place an order. Emails will be sent in the same order that reservations were made, and you’ll only be able to buy the Steam Deck model that you originally reserved. Valve will release new batches every week for those who got a reservation.

Your reservation deposit will be applied, and shipping costs are included, Valve said. Orders placed on the 25th will start shipping out on the 28th.

Keep in mind Valve first announced Steam Deck last July 2021, with the promise it would start shipping by December. Valve ultimately delayed its release date by two months due to supply chain issues. But it now looks like that was the one and only delay. Valve is also still letting you reserve the Steam Deck for $5.

However, if you reserve now, the order page currently states that you can expect it to arrive “after Q2 2022”.

How to reserve Valve Steam Deck

Reservations first opened in July 2021, initially, for users who had made purchases on Steam before June 2021. All three options were available to reserve. They still are available, in fact, although the delivery date is now a far-off one – you’ll get your console sometime after Q2 2022 if you reserve one at present.

There’s a refundable $5 reservation fee and a limit of one reservation per person. Keep in mind this isn’t a preorder; it simply puts you into a queue to order the device. When inventory is available, customers will be notified in the order reservations were made to make their purchase.

Where will Valve Steam Deck be available?

The first units of Steam Deck will launch in the US, Canada, the EU, and the UK in February 2022, with other areas following later in the year.