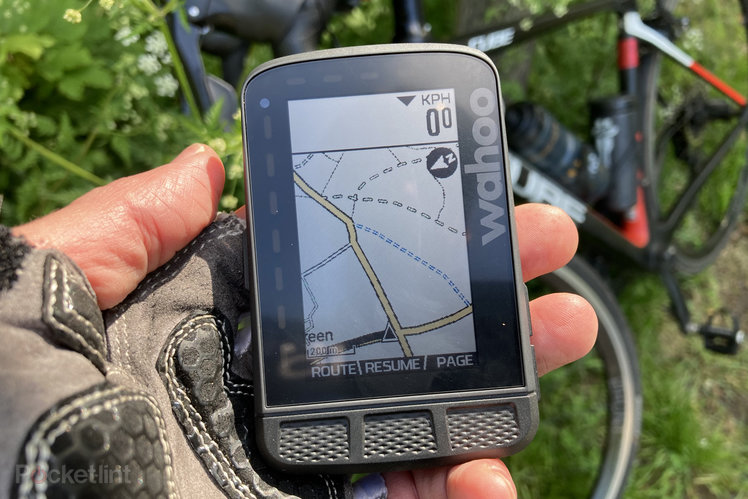 Bike computers have quickly been adopted as the one piece of must-have technology for cyclists – and it’s easy to see why. They take the hassle out of riding new routes by providing turn-by-turn directions, while recording all of your ride data for serious training analysis or just plain bragging rights on Strava.

Wahoo gained popularity through its Elemnt and Elemnt Bolt v1 bike computers – which rapidly gathered a loyal following thanks to solid, reliable hardware and repeated firmware updates that grew the products.

The Roam arrives on the scene as more of a finished top-of-the-range product, though doubtless Wahoo will continue to develop and add features across the product’s lifespan. So, how does the Roam perform?

The Roam is noticeably chunkier than the race-focused Elemnt Bolt that it sits above in Wahoo’s current bike computer range; and closer to the original Elemnt that it essentially replaces. 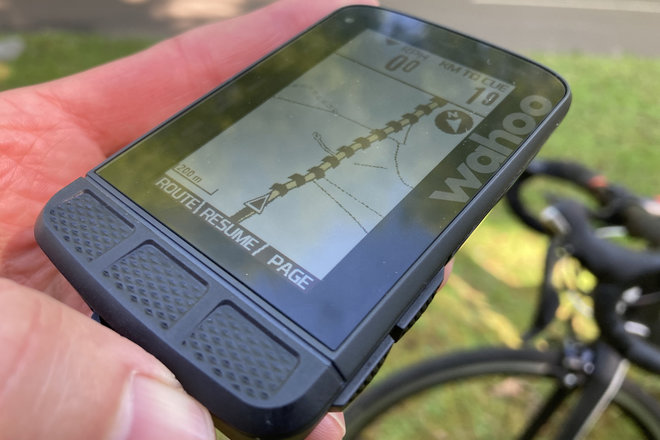 It has a tough, graphite grey polycarbonate body that houses the screen and keeps it safe from the inevitable drops it will suffer. An IPX7 waterproofing rating means it’s safe to fully submerse and it shrugged off all the winter weather that was thrown at it during our rides without a second thought.

The display is sharp enough for clear mapping and Wahoo uses its colour capability well to further enhance this. We’ve been impressed with the LCD screen in all lighting conditions, thanks in part to the Roam’s ambient light detector that automatically adjusts the brightness.

Around the top and left edge of the screen sit customisable LED lights which can be programmed to aid navigation or give an indication of your performance, such as heart rate or the power zone you are in. We found these really useful for some activities, such as time trialling where a quick glance would tell us if we were on track, but also that we could turn them off for a distraction-free group ride. 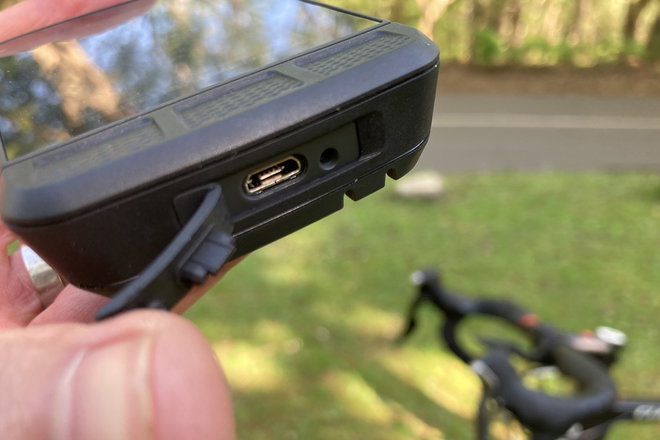 Three large buttons sit below the screen, allowing you to easily start and stop recording, and to navigate between data pages when on the move. A further button for powering on/off sits on the left edge, while two buttons on the right edge allow you to zoom in and out of either the map or data screens to show more or less fields/increase the font size.

As you may have figured out from those buttons: the Roam doesn’t have any touchscreen capability, but we don’t think that it suffers much due to this, as we have rather mixed feelings about how useful this is on a bike computer anyway (done badly and rain and sweat, etc, can otherwise cause some problems).

A rubberised cover hides away the Micro-USB connection/charging port from the weather and road spray. Shame it’s not USB-C, but even Garmin continues to suffer from this older port problem 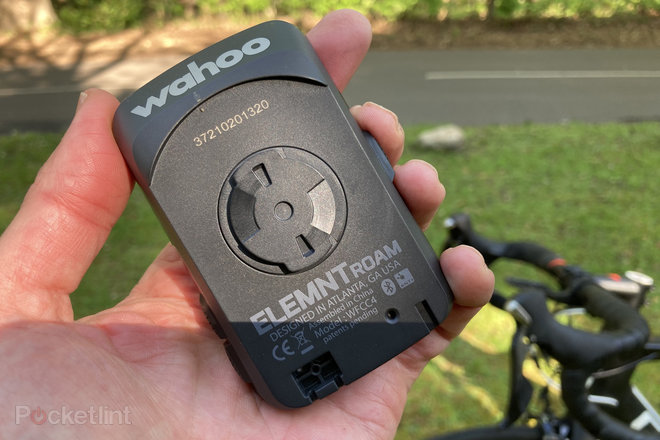 Wahoo claims a battery life of 17hrs, which is a long day in the saddle by most people’s standards, though it is less than some competitions could demand. In our testing, using mapping and with a power meter, heart rate monitor and speed sensor attached, the Wahoo battery performed at that level, seeing us returning home from a seven hour ride with 60 per cent battery still left – and the ability to do multiple shorter rides over the days after, all without recharging.

In the box you have the choice of a stem or out-front mount for a more aerodynamic option, the latter which we find easier to read on the go – in particular as it’s further forward. It’s good to have both provided though, as it means you can set the Roam up on a second bike straight away. There’s also a locking screw provided for those who wish to secure this computer to the bike. Existing Elemnt Bolt users will find that they can’t reuse their out-front mounts, though, as the Roam is too large to for it – although the same twist-and-lock system is used.

Connectivity, setup and the Wahoo App

Wahoo’s own app is the gateway to customising the Roam and connecting it to the wider world. Through this you can update or download new maps, add and reorder data fields, as well as viewing your ride data. Pairing is straightforward and we like being able to use our phone to customise the Roam, rather than having to fiddle around on the device itself, though in an ideal world we’d like to be able to do both – just in case we needed to make changes out on the road. 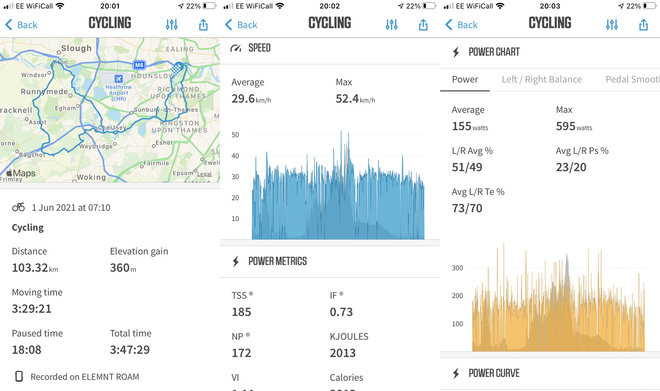 While it’s perfectly possible to use the Roam for days out without carrying your phone, we find that most people ride with the latter stowed in their back pocket. Doing this allows the Roam to display notifications, such as texts, calls or WhatsApp messages, though there’s no function to acknowledge or respond to these. Naturally, these can also be temporarily or permanently switched off to leave your ride free from distractions. Via your phone’s data connection the Roam also offers a Livetrack feature so you can allow anyone to see where you are.

When it comes to data syncing at the end of your ride, the Roam can do this automatically over Wi-Fi, assuming you’ve set this up, or again via the phone app. Either way, it will automatically push the ride data out to your chosen third-party apps, such as Strava.

We found that the app connectivity to the Roam was solid throughout our testing time. One bugbear that we did have was that the Roam could only be connected to one phone, limiting the ability to share the it with a family member or housemate without going through the rigmarole of pairing and unpairing it each time.

Sensors and accessories are connected via ANT+ or Bluetooth – and we had no trouble linking a Garmin heart monitor strap and Vector 3 pedals, as well as Wahoo speed and cadence sensors. As you would hope, Wahoo’s watch, the Rival, connected to the Roam seamlessly. 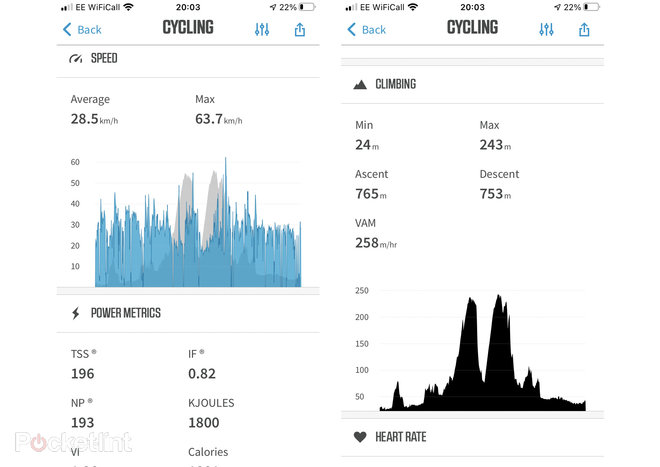 From the Rival you can broadcast heart rate data that is displayed on the Roam, while using the multisport mode allows the Roam to simply mirror the Rival – which will appeal to triathletes looking for a smooth transition to and from the bike leg. The Roam is also able to connect to a Wahoo Kickr to provide some interval training, though in practice we expect most people will use training specific apps for this such as Sufferfest or Zwift.

The big developmental step that the Roam offers is its on-board mapping and routing capability. Older devices like the Bolt v1 didn’t actually have maps loaded, instead such devices would download the route information needed each time via your phone’s connection. This system worked fairly well, but it had two main drawbacks: firstly, you would only get a breadcrumb trail (by which we mean a line to follow on the map), rather than turn-by-turn instructions; secondly, if you had to deviate from your loaded route, the computer had no way to reroute you back towards your destination. 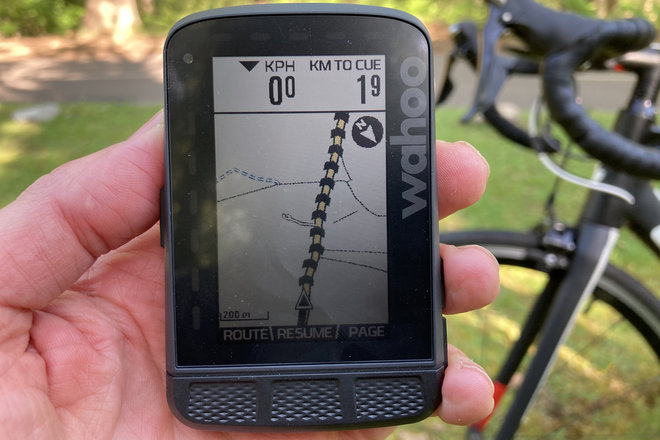 With its own maps on board, the Roam is able to get you back on track if you head off route, just like your phone or a satnav can. In practice it works well most of the time, quickly calculating alternatives. Occasionally it failed to recognise the quickest route to a final destination, trying instead to divert us around to re-join our original route at an earlier point, though this was a little inconsistent and we couldn’t see a clear reason why. Hopefully Wahoo will further refine this feature in future firmware updates.

The Wahoo app doesn’t have its own route-creating capability, so you’ll need to use a third-party one such as Strava or Ride With GPS to create or download a route. These apps can be configured to automatically sync with Wahoo’s, which in turn will push the route to the Roam when connected. Once this has been done routes can be selected directly from the Roam, with no need for your phone.

Other handy mapping features include ‘Route to start’ which will guide you from wherever you are to the start of a chosen route – great if you are visiting a new area and your meeting point is a little way from your route’s beginning. 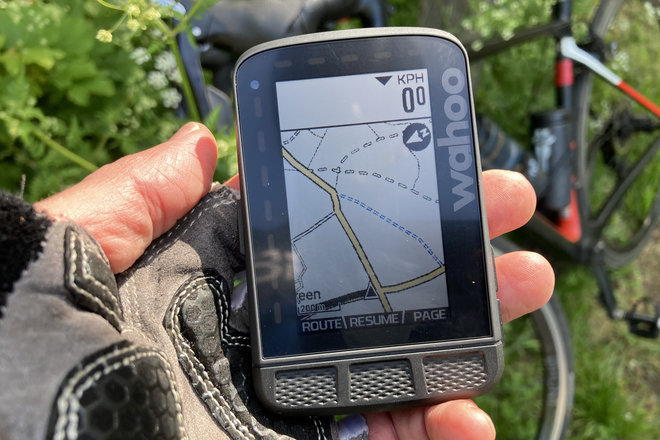 ‘Take me there’ is a feature which allows you to either zoom out and select a point on the Roam’s map, select a saved ‘favourite’ destination, or enter an address via the app that the Roam will then create a route to for you. We can see how this could be handy if you suddenly need to divert, but for us it was most useful in guiding us back home when we were out exploring. There’s no way of customising the route it creates though, which can be a little frustrating, and despite having the app set for ‘road’ use, it did still insist on taking us down the odd gravel path.

We found it takes the Roam a little while to calculate routes this way, however, and combined with its relatively slow start-up time we think that the Roam’s processor is a little underpowered for such tasks.

More of concern to us, however, is the small amount of internal memory – just 4GB. When we first got a hold of the Roam we updated the maps, or at least we tried to, but quickly discovered that we couldn’t download as many maps as we’d hoped. We were limited to just the UK and French maps, which proved to be more than enough for our testing, but for long distance multi-day rides this could prove a problem and will frustrate some users. 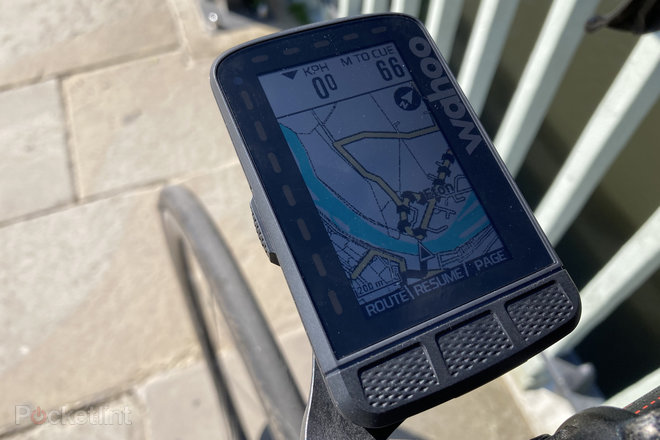 All in all, we really like the developments that have been made in mapping, and although there’s still room for improvement, overall it’s easy to follow on the large colour display. We would like to see the large screen put to even better use by displaying the minor roads and trails as you zoom out – as this level of detail is lost. We found that the GPS locked on in a matter of seconds after booting the Roam up and was spot on with accuracy on our on road tests.

On top of the data recording and navigation, the Roam offers a few other features, but nothing like the amount that you will find from some other manufacturers – such as the Garmin Edge 1030 Plus. The Wahoo does have full integration with Strava, which includes highlighting your chosen segments while riding, allowing you to try and better your PBs; and you can import workouts from apps such as Training Peaks to use on the road, although you’ll really need a power meter to get the most out of those. 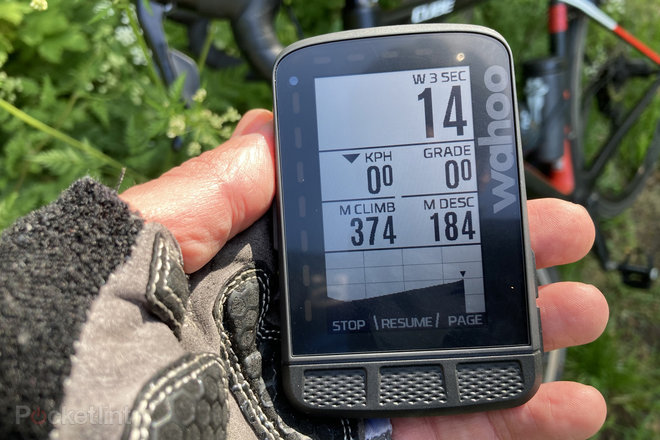 There is definitely a need to improve on the Roam’s elevation page, which is nothing like as clear or useful as Garmin’s excellent ClimbPro. Beyond that, the Wahoo app lags behind Garmin in terms of analysing and presenting the data it collects, but it’s become clear that while some people will see this as a loss, others will welcome this more pared back simplicity.