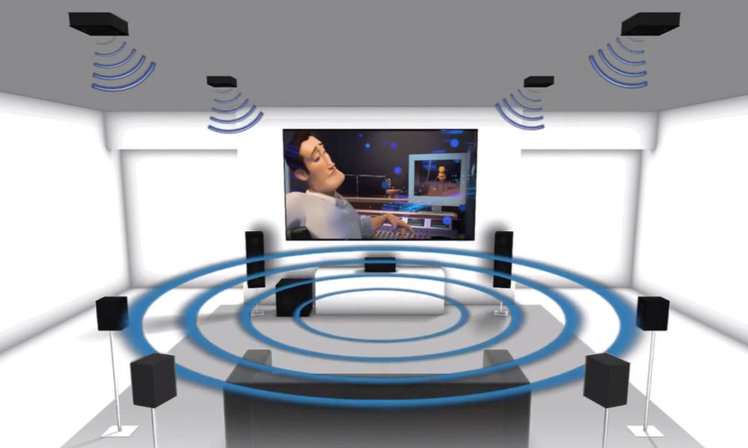 Home cinema isn’t just about the picture, sound is equally as important, and there have been significant advancements in that area in recent times.

No longer are we confined to 5.1 and 7.1 surround sound systems, we can have fully encompassing, cinema-like experiences thanks to the proliferation of Dolby Atmos.

Available on movies, sports broadcasts, and even games these days, Atmos is doing for sound what Blu-ray and 4K Ultra HD did for video performance.

But, what is Dolby Atmos? Why is it exciting? And, what do you need to get the most from it?

What is Dolby Atmos?

Dolby Atmos takes the longstanding surround sound, home cinema concept but adds extra height channels to provide a more enveloping sound effect in your room. Rather than have sounds of raindrops, or a helicopter moving around the same height as your ears with 5.1, for example, Atmos means you’ll be able to hear rain falling from above or a helicopter moving from over your head and into the distance. At least, that’s the theory.

It introduces new speaker configurations, such as 5.1.2, where there are five speakers around the room, one subwoofer and two height channel speakers. You could also have 5.1.4, 7.1.2 or 7.1.4. If you want some extra low-end grunt, you can also add an extra subwoofer into the mix.

Dolby Atmos isn’t defined by the number of channels, per se, but by the enhanced ability to deliver this more immersive sound experience. That’s a line used by Dolby and supporting brands as a wider range of Dolby Atmos-enabled devices are made available.

What do I need to get Dolby Atmos?

For the best possible Atmos experience, in-ceiling speakers are the way to go.

However, not everyone is able to facilitate them, so the more common approach at home is to get upward firing Atmos speakers to fire the sound up to the ceiling and reflect back down to the listening position. And, this is the form adopted by many speaker, AV receiver and soundbar manufacturers today. 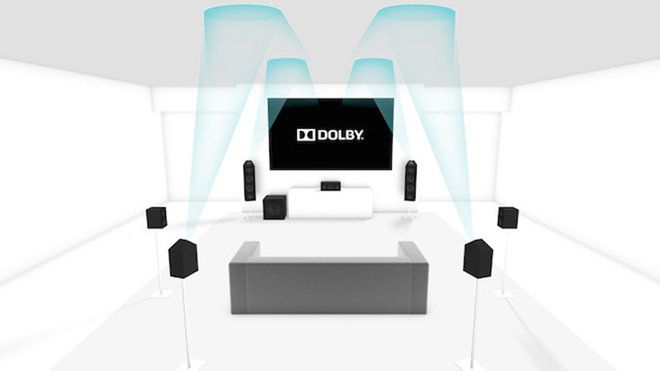 For those with traditional separate speakers – like a home cinema sound system – this might just mean the addition of upfiring modules. Several brands, including Onkyo, offer speakers that you place on top of your existing left and right floorstanders, or nearby on an AV stand. These are dedicated to Dolby Atmos and are angled slightly to bounce the sound off the ceiling and back down to your sitting position.

Some manufacturers build upfiring units into their left and right bookshelf or floorstanding speakers. So, as well as fire sound towards you, they also fire upwards too.

In order to drive dedicated Dolby Atmos speakers, whether they are upward firing modules or are built-in to the ceiling, you’ll need a compatible AV receiver. The majority of major AV brands support Dolby Atmos across their ranges, and all at different price points to suit different budgets.

But that’s not the only route to getting Dolby Atmos in your home.

What Dolby Atmos soundbars are available?

We’ve been talking as if we’re assuming you have space for a full Atmos surround sound setup. What if you want the added height effect but space is at a premium? Then you can go for a Dolby Atmos soundbar. 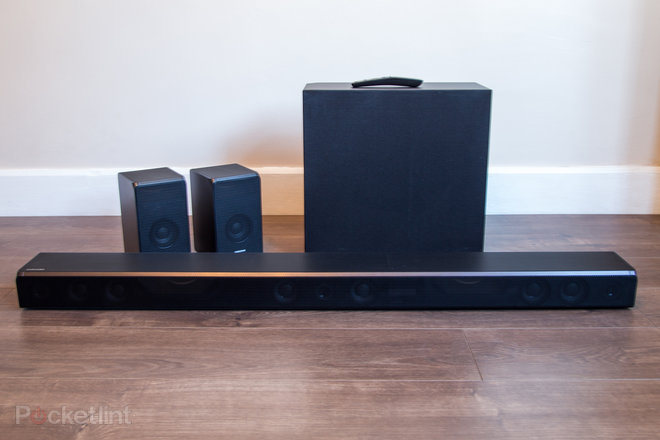 Most of the big audio brands offers Dolby Atmos soundbars in some form. Many offer models with upfiring speakers built into the top of the body, some offer a virtual Atmos effect, recreating a wider soundstage to bring that immersion, but without directly firing sound upwards.

A few years back it was only the high-end bars that had this option, but we’re seeing a much wider selection of mid-range bars offering Atmos too, meaning it’s getting much cheaper to get that boosted audio effect.

What other hardware do I need for Dolby Atmos?

A big part of the puzzle, of course, is the source. You need to find a way to feed that Dolby Atmos signal to your speakers. The starting point for movie fans is likely to be a Blu-ray player – either standard or 4K Ultra HD. As long as the Blu-ray player has been set to output a direct bitstream signal, your Dolby Atmos-enabled receiver or soundbar should be able to decode the signal and send the height channels to the Dolby Atmos speakers.

You will of course also have to make sure the Blu-ray disc you’re watching has a Dolby Atmos soundtrack on it. You can check the rear of the case to see if it does.

Some TV services offer Dolby Atmos – BT Sport Ultimate will give you Atmos on some live football matches if you have the 4K Ultra HD set-top box. Sky also provides Dolby Atmos on some sporting events and Sky Cinema movies through its Sky Q box.

Media streaming is another area that supplies Dolby Atmos soundtracks. Netflix, Amazon Prime Video and Disney+ each support Dolby Atmos on movies and TV shows, as does Apple TV through its Smart TV apps and own set-top box. In terms of other streaming devices, Roku supports it, as well as Android TV boxes, such as the Nvidia Shield TV, and Amazon’s Fire TV.

You can use a games console too, as the Xbox Series X/S, Xbox One, Xbox One S, PlayStation 5 and PS4 all support Atmos soundtracks on films, either through streaming, with some games adopting the format too. The newer Xbox consoles also support Dolby Atmos for gaming.

Many TVs now support Dolby Atmos as well. You can either passthrough an Atmos signal to a soundbar or receiver, or stream from the likes of Netlfix. It’s best to check though before you purchase your next flatpanel as some don’t yet offer the feature.

In more recent times, some can supply Dolby Atmos audio through a HDMI 2.1 port that supports HDMI eARC technology. You do need a sound system or bar that supports the same (eARC) and it only tends to be found on sets and devices released in 2019 and up.

A final option is to purchase a TV with Dolby Atmos speakers built into the set itself – such as Sky Glass. Sky’s own connected TV includes front, side and upwards firing drivers, plus its own subwoofer – all sited inside the TV itself. This gives a decent Dolby Atmos experience and wider soundstage, but isn’t quite as all encompassing as a home cinema solution. Still, it does make things easier.

As with any new format, when it first launched, there wasn’t a lot of Dolby Atmos content around. One of the first movies to be released with an Atmos soundtrack was Transformers: Age of Extinction. Luckily films with Atmos have greatly progressed since then, in both quality and quantity. Many 4K and standard Blu-rays on the shelves will have an Atmos soundtrack – so check your collection.

BT TV offers Atmos through its 4K Ultra HD sports channel. Live sports have been shown with the added height since 2017, but to get it you need to have the BT YouView+ 4K Ultra HD set-top box.

Sky Q also sports Dolby Atmos to its content offerings. This includes many movie downloads if you have a Sky Cinema subscription and Premier League football coverage. 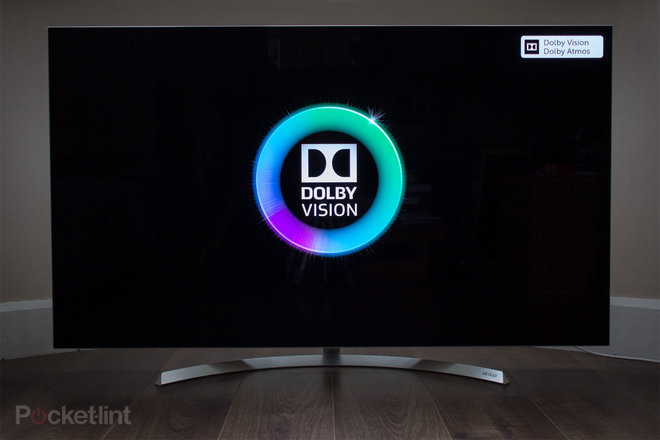 Netflix offers Atmos content, and we thoroughly encourage you to check out Altered Carbon, as it has some of the best surround moments. Amazon Prime Video also has some Dolby Atmos content, but we’ve found it to be fairly sporadic and only work on certain hardware. Most new content added to Disney+ also comes in Dolby Atmos, including Marvel and Star Wars movies and TV shows.

You can purchase or rent many digital films with Dolby Atmos soundtracks through the likes of Apple TV and Rakuten TV.

Plenty of Xbox games now have Dolby Atmos soundtracks too – check out Forza Horizon 5 or Halo Infinite on an Xbox Series X or S, for example.

What about Dolby Atmos on laptops, phones and tablets?

In more recent years we’ve seen Dolby Atmos being talked about in other terms – not just in the context of the home cinema experience.

Remember above when we said that Dolby was talking about Atmos not in terms of the number of speakers, but with the aim of delivering the best audio experience possible? That mantra has flowed through into devices like laptops, tablets and phones. We’re seeing an increasing number of devices claiming to offer “Dolby Atmos” audio.

In reality (and this is slightly confusing), the Atmos branding in this context isn’t about decoding those channels and using a wider range of speakers – it’s about virtualising a more immersive soundscape. Yes, those devices sound better when the Dolby Atmos mode is turned on, but it’s not aiming to place sound objects in space like you might get at home from your separates system.

So, take other forms of Dolby Atmos (specifically on mobile devices) with a pinch of salt – it’s using the same branding, but it’s not really the same thing.