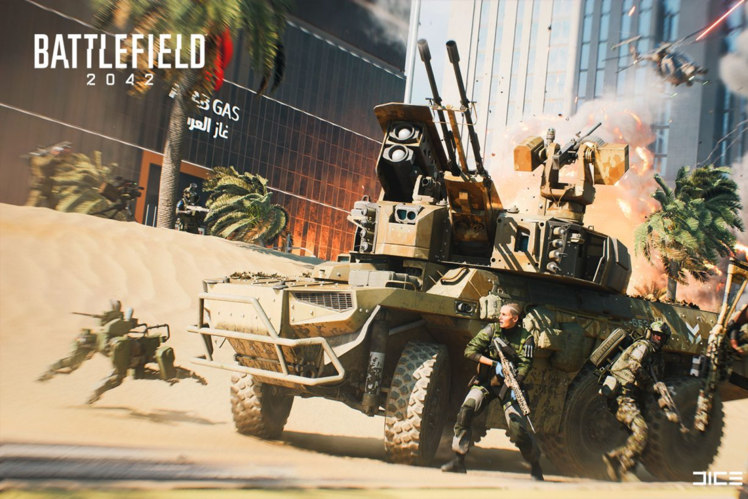 Battlefield 2042 has launched, and while it’s been met by a somewhat mixed reception thanks to its consistent bugginess and server issues, there’s still a heck of a lot of fun to be had in its modes and across its maps.

This is a live service game in the modern sense, though, and Dice has made it clear that there will be a lot of post-launch content to support BF2042 – so find out what’s just arrived and what’s coming up, right here.

On 19 April 2022 Battlefield 2042 got a major update full of a massive amount of bug-fixing and tweaking, including one huge and widely-awaited addition in the form of VOIP – the ability to actually use voice-chat with your team in-game.

Update #4.0 for #Battlefield2042 is now available across all platforms
If you’ve been playing during this time, please restart your game to grab the Update
Update Notes: https://t.co/d22PICnrOh pic.twitter.com/BgQLAnTzFP

There are also some adjustments to specialist traits, tweaks to vehicle power and hopefully more rewarding XP progression and ribbon awards to encourage more teamplay in online servers. There are so many changes that it would be impossible to list them all, so check the patch notes to peruse them in full.

A lot of people were waiting on BF2042’s 3.3 update, which brought the scoreboard that Dice promised some time ago, along with some other changes.

Update 3.3 for #Battlefield2042 goes live across all platforms tomorrow, March 8, at 09:00 UTC
It’s a zero downtime update so you’ll be good to jump in and play once you have it downloaded
Update Notes: https://t.co/rrQarZJYei

The scoreboard should be much clearer now, and you can also finally see how many times you’ve died, a key stat that was missing. Dice has also been playing with aim assist for controller players to make your shooting experience feel smoother, which is always welcome.

That was the main thrust of this update, though – it was all about the scoreboard, and not much else.

The previous major update for BF2042 was a while back; Dice published its blog post unveiling the changes, which weren’t quite as voluminous as in previous iterations, but contained some significant and welcome tweaks.

Update #3.1 for #Battlefield2042 goes live tomorrow, December 9, across all platforms at 08:00 UTC!
No downtime is expected. We’ll keep you updated during rollout
Update Notes: https://t.co/lHcRFcg4Gy pic.twitter.com/qalrLFOIJo

For us, most important was the removal of rooftop capture points from the three maps that featured them in Breakthrough – these were practically broken if you were attackers, and the game should now flow far more fairly without them.

Another big balance change came for Proximity Sensors, which were far too universally used. They had their ping radius narrowed, their duration halved, and you can now only carry one instead of two, which should prioritise other throwables nicely.

The cannons for most vehicles took another nerf, reducing their splash damage to try to give infantry more of a chance, which has been a theme since launch and is still welcome, while most weapons had some more tuning done to make recoil feel better.

Dice also says that hit registration should again get a marked improvement, although in all honesty we’ve had few problems with it since the last couple of updates. Those are the headline changes, but you can read the blog post to find out more in detail.

Before update #3.1 came #3, unsurprisingly – you can find a huge blog post detailing all of of its changes, right here.

Tomorrow Update #3 for #Battlefield2042 goes live across all platforms at 08:00 UTC
It’s our biggest update yet, with plenty of fixes, improvements and QoL enhancements
No downtime is expected. We’ll keep you updated during rollout
Update Notes: https://t.co/3d7zHSy40w pic.twitter.com/2tEY4Wypgc

There are way too many details to list them all, but perhaps the biggest came in the form of new Weekly Missions, assignments you’ll get each week that award XP when finished to help you level up. Finishing all your weekly tasks will grant you a unique cosmetic, seemingly, so you’ll want to log in each week to try them out.

Another big change brought back the old system of revives – when you die, you’ll see any medics who could revive you within 50 metres so that you can have a sense for whether you’re likely to be coming back.

Similarly, medics can ping downed players to let them know they’re on their way, just like in older Battlefield games. That’s a welcome addition that we were confused to see left out in the first place.

There were loads of bug fixes to make sure that weapons and equipment are working as designed, including a tweak to stop the 8X sniper scope from zooming in so ridiculously quickly (we’ll miss you, 8X!).

Dice also says it improved navigation around your Collection in a few ways, too, to let you edit your loadouts and weapons in fewer clicks – it’s a slightly arcane system at present and takes some getting used to, so this is no bad thing.

What there wasn’t a huge amount of in this update is balance changes in terms of boosts and nerfs for weapons and vehicles themselves.

What arrived in Update #2?

At the end of the first week of BF2042’s life cycle, Dice broke cover to confirm that it’s been listening to all the feedback flooding in, both positive and negative, from newcomers and longtime fans of the series.

In a frankly HUGE blog post, it detailed a massive raft of changes that it’s going to bring to Battlefield 2042 in a series of updates, the first one having launched on 25 November 2021 and with another two planned before Christmas 2021.

You can find everything that’s changed in granular detail on the EA website here, but there are some headline changes that you’ll want to know about.

Firstly, a wide array of weapons have had their recoil and bullet spread adjusted to be more forgiving, which should make shooting easier for a lot of players across the board. Similarly, the dreaded PP-29 SMG has had its recoil increased to make it less devastating at long range.

Multiple vehicles have had their weaponry adjusted to reduce their dominance, while the Hovercraft has also had its armour reduced to make it less of a beast to fight against.

Finally, there’s also a fix for the bug that stopped players from being revived if their body was near a wall – something that was happening way too often.

What else is coming to Battlefield 2042 later?

While the update above is out already, Dice has already confirmed a lot more changes coming further down the line. There’s a massive blog post you can read to check out everything that’s getting tested, but here are some highlights.

There should be improvements to matchmaking and the social interface to make partying with your friends easier, while voice chat should eventually be coming to the game as well.

Performance should get better over time thanks to small changes in the backend, while maps are also seeing a lot of tweaks to make sure collision is working properly all over them.

New game modes are coming for Portal and Hazard Zone is getting a raft of changes to make it more suspenseful.

Meanwhile, in the longer term we know that 2022 will see the launch of a set of season passes for the game, each of which should bring new maps and specialists along with new weapons for players to unlock and use, so we’d anticipate that the amount of content BF2042 offers up is only set to increase.