Wi-Fi or Whole-Home Wi-Fi system (Mesh); Which one is better? If you have this question in mind, we will try to help you with some simple explanations and essential points. No doubt that we all need to have a strong WiFi connection to do the work. And, when it comes to setting up Wi-Fi at home, it is important to decide which connection to choose, the traditional or conventional router or the Mesh Wi-Fi. The Mesh WiFi system might be a new concept for some of us and it has its share of pros in comparison with the conventional WiFi system, but that doesn’t mean it is better than it in all aspects. This article will give you a detailed explanation of both WiFi systems and help you decide which one would be better for you. 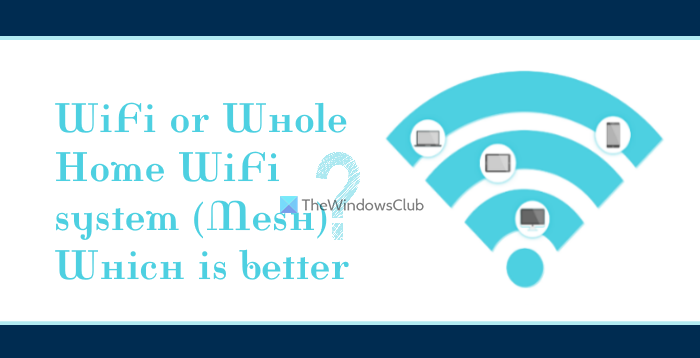 What is a Traditional Wi-Fi System?

A traditional WiFi system includes a router which is a device that distributes the Wi-Fi signals coming from a modem among all the devices in a home network.

The system works great but the most common issue with this WiFi system is a dead zone encounter. A dead zone refers to any area where the signals drop to zero or signal strength weakens. Dead zones appear typically due to physical barriers in the house (like walls, a metallic barrier, etc.) or range issues of the WiFi system.

What is a Mesh WiFi System?

Mesh WiFi, also known as the Whole Home Wi-Fi system, includes a series of devices that creates a seamless Wi-Fi network across a home or an establishment. This series of devices is called nodes. The main node plugs into the modem, just like the traditional router. The other nodes pick Wi-Fi signals and distribute them over the area where they are placed.

Each node replicates the function of the router; and thus, dramatically expands the Wi-Fi range without compromising on the signal strength.

Now, let’s check the important factors for traditional WiFi and Mesh WiFi systems. These are as follows:

Traditional routers provide optimum coverage in smaller homes, such as flats or apartments. They offer strong signals in nearby areas, but as soon as the distance of the device from the router increases, the signal starts to weaken.

The range of the network in a traditional system can be increased using a device called a Wi-Fi extender. However, an extender is just an addition to the router. It makes sure that you stay connected to the internet, but may not be able to give you consistent signals.

On the other hand, in a Mesh WiFi system, the nodes can strategically be placed in the areas where a strong Wi-Fi connection is required. Each node performs like an individual router, ensuring a strong and even network coverage within the entire home or workplace.

Also, unlike conventional routers, Mesh Wi-Fi signals can work through walls and other electronics, eliminating most of the dead zones in your home. The arrangement can be repositioned or expanded as far as needed by purchasing additional nodes.

Each Wi-Fi extender creates its own network in the traditional WiFi system. So, you have to manually switch between networks to get better internet coverage in different areas of your home. Also, you need to remember multiple network names and passwords in case of a traditional Wi-Fi setup.

The Mesh system uses a single name and password for the entire network. So, you get the freedom to stay connected to the stronger signal as you roam around within that network.

The cost of installing a Mesh WiFi system is higher than the traditional WiFi system, making it a less affordable option for many users. It might be very hard to find a basic Mesh system with 2 nodes below $200. And, as you install additional nodes, the total cost increases per node. Each node may cost around $100 to $200.

Whole Home WiFi systems are generally easy to set up than the traditional Wi-Fi system. You don’t have to configure each node to connect to the router.

Range extenders, on the other hand, need to be set up and configured to work with the router.

Should I get a Wi-Fi Extender or a Whole Home Wi-Fi System?

So, now let’s see which WiFi system would be the best for you. Before making this important decision, it’s best to check on your specific requirements. If you live in a small space such as a studio apartment or single-story building, a traditional router will work for you. In fact, if your current WiFi system is fulfilling all the requirements you need and is within your budget, then you don’t need to think about the alternative. But, if you live in a larger space where you need to extend the Wi-Fi coverage across multiple rooms or floors, a mesh system would be the best option for you. Of course, the total cost and other factors also matter.

What is the difference between Wi-Fi and Mesh Wi-Fi?

A traditional WiFi router distributes the WiFi signals among all the devices in a home network from a single Wi-Fi access point. In this arrangement, the signal has to travel the entire distance between the router and the device which sometimes creates trouble with the WiFi connection. It is a bit similar to using a single speaker to listen to the audio in different rooms of your home.

Mesh Wi-Fi uses 2 or more Wi-Fi access points to create a network of Wi-Fi. In this arrangement, the signal travels from the router to the device through different nodes connected to each other. Each node increases the range of Wi-Fi for the devices in a home network. Think of it as using a separate speaker in each room of your home to listen to the audio clearly.

Is Mesh network better than Wi-Fi?

In terms of reliability, wireless coverage, and speed, a Mesh network is better than a conventional WiFi system in some cases. Easy customization and scalability are other things that one can find better than a traditional WiFi system. But, if you have a single-story apartment and the number of devices is too limited, then a conventional Wi-Fi system would be more than sufficient for you, plus it is budget-friendly.