No one can deny the extensive dependence of millennials on technology and the Internet. You need a proper Internet Connection in order to carry your daily chores. However, sometimes a WiFi is not apt enough to provide everyone in the office with a fast and reliable Internet Connection. So, they look for either a WiFi Extender or a Repeater to stretch the maximum range of the WiFi. In this article about WiFi Extenders and WiFi Repeaters, we are going to see which one is better for you. 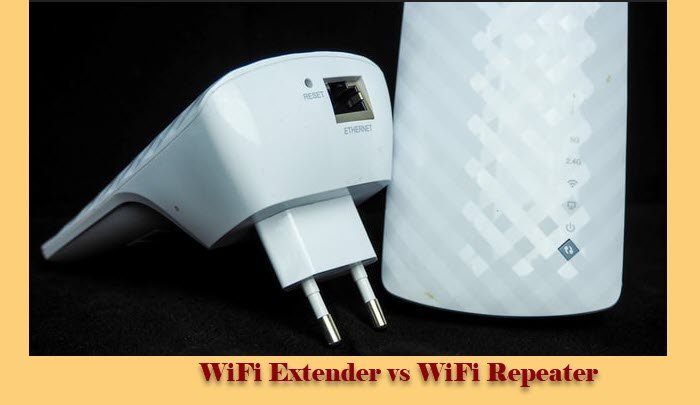 What is Wi-Fi Repeater?

WiFi Repeater is used to extend the range of your WiFi. You need to plug it in a region of poor network reception and start the machine. Its working is pretty simple, as the name suggests, WiFi Repeater, repeats the signal coming from the WiFi. It connects to the WiFi to broadcasts its signal converting a large circumference.

WiFi Repeaters are nothing but a router that connects with the primary router, the one connected to the Ethernet, catches its signal, and then sends it to more parts of the vicinity. So, if you have a lot of WiFi Repeater connected to a single WiFi, you will get an inferior bandwidth. Therefore, we need to always keep this in mind.

What is a Wi-Fi Extender?

Quite evident from the name itself, WiFi Extender is a device used to extend the range of your WiFi network. There are two types of WiFi Extenders, wireless and wired. Extenders were wired but not even they have adopted the wireless trends. While setting up WiFi Extenders, you need to make sure that it is in the room in which the primary router is. Once the setup is complete, you can move the device wherever you want.

WiFi Extenders are usually used to reach the dead zones of your home and office. One thing you need to always make sure, the connection between your Router and Extender should be good, otherwise, you will see network drops and poor reception.

The problem with WiFi Repeater is that they can be easily interfered with by an external source of signal, for example, electric flux created by your Inverter or Refrigerator. On the other hand, WiFi Extenders, especially the wired ones, are not affected by any means of interference.

What is the difference between WiFi Extender and WiFi Repeater?

Apart from their working, both these devices have some key differences that can dictate your decision. So, we will look at them and see which one is for us.

These were some key differences that can help you in determining the best device for you. However, that is not it, we will be talking about some questions that you might have.

Are WiFI Extenders and WiFi Repeaters worth it?

One of the biggest reasons why a particular product sells is marketing. One may wonder, are WiFi Extenders and WiFi Repeaters worth it, or is it just clever marketing.

Well! the answer is not as easy as you may think it is. Yes! WiFi Extenders and Repeaters do increase your signal reach but they are not for everyone. If your WiFi signal is not reaching every corner of your home then you may want to try some of the things mentioned below before spending your money on an external device.

If you have done all this, and still are facing slow Internet, try fixing the issue by making some alterations in settings.

Now, if after doing all this, the issue persists, you can go and buy WiFi Extenders or Repeaters with the details aforementioned.

One may want to know which one is better, 2.4GHz or 5GHz. More often than not, 5GHz is better than 2.4GHz. The issue with 2.4GHz is there are too many of them. Since most devices are based on this frequency, hindrance causes a lot of interference that can sometimes drop the bandwidth.

5GHz, on the other hand, has one caveat and can be something that can dictate your decision. According to the laws of physics, frequency is inversely proportional to wavelength. So, 5GHz has a shorter wavelength and hence it can not penetrate bricks, walls, metals, and other things.

To be very honest, yes, WiFi Repeaters and Extenders decrease Internet speed. But they are some worse than others.

Talking about WiFi Repeaters, there are two types of it. Single-Band Repeaters have one band, so, it has to receive and transmits a signal by the only band it has. So, it can reduce 50% of the total bandwidth.

There is another type of WiFi Repeaters – Dual-radios. They receive the signal from the lower channel and then rebroadcast them with the upper channel.

Therefore, you need to make sure that you are going for dual-band WiFi Repeaters as it does decrease bandwidth but the result is not as exacerbating as it was in the former case.

What is WiFi Booster?

There is another name in the market that you may have heard while looking for a device to extend your WiFi range. WiFi Booster is a term that is given to WiFi Repeater and WiFi Extender, collectively.

How secure are WiFi Extenders or Repeaters?

If you are skeptical about the security of WiFi Extenders or Repeaters, don’t be. They are as secure as any other WiFi, you can configure security protocols such as WEP, WPA, WPA2, etc. So, if you think your WiFi is secure then you can believe that these devices are not going to cause any security trouble for you.

Which one should I go for WiFi Extender or WiFi Repeater?

This decision depends on your need. If you have a pool party, where WiFi signals fail to reach and want a device that will help you in playing your Spotify playlist via the Internet, go for WiFi Repeater. So, we can say that WiFi Repeaters are good if you don’t need a sky-high bandwidth – whereas, WiFi Extenders are best suited for a professional environment.

Hopefully, this article has helped you in making the right decision.