Whether you’ve got a dockable Nintendo Switch, the portable Switch Lite, or the improved OLED Switch, you’re probably going to need a memory card. The limited internal memory will disappear quickly, even if you primarily play physical releases.

The real question is whether a pricey memory card is worth it for added performance gains, or whether you’re better off focusing on capacity instead.

All models of Nintendo Switch support UHS-I (Ultra High Speed Phase I) microSD cards. The UHS-I standard has a theoretical maximum read speed of 104MB/sec, though proprietary technologies from SanDisk and Lexar have seen improvements in the 160-170MB/sec range.

Nintendo specifies minimum read speeds for UHS-I microSD cards of between 60 and 95MB/sec. This suggests that even cards with a higher read speed are bound to these limitations. As long as your chosen card can hit Nintendo’s quoted 60 to 95MB/sec, a “faster” alternative should not provide any benefits in terms of loading time or game performance.

Cards on the lower end of this scale may suffer from slightly longer loading times or performance problems, but provided they fall within this range, they meet Nintendo’s specification.

Nintendo specifically states that “the higher the transfer speed, the better gameplay experience on Nintendo Switch” but this is only true to the point where the microSD card’s read speed matches the console’s maximum read speed.

Which Memory Cards Does the Switch Support?

Nintendo states that the Switch is compatible with microSD cards (up to 2GB), MicroSDHC cards (between 4GB and 32GB), and microSDXC cards (64GB and greater).

There is no benefit to purchasing a UHS-II or UHS-III microSD card since these have additional rows of contacts that enable higher read and write speeds. The Switch lacks the corresponding contacts to achieve these speeds. 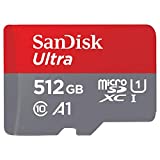 Fortunately, the price of high capacity UHS-I cards has come down dramatically in the last few years and you can now buy 256GB or 512GB cards from around $35 on the small end to $75 on the larger end. Memory prices are prone to fluctuation, so these prices might jump around a bit depending on when you buy.

Buy a Brand You Trust

By far one of the most factors when it comes to buying a memory card is buying a quality product from a brand you trust. The old “if it seems too good to be true” adage is worth keeping in mind. Cheap cards that promise the world are often not worth the money you’ll save when they under-deliver in terms of performance.

Look for brands like SanDisk, Kingston, Lexar, Samsung, and PNY. Avoid any obvious knock-offs which attempt to imitate branding seen on the more recognizable brands. You’ll get what you pay for, and it will last. 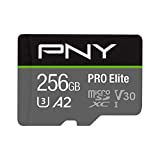 The same is true in terms of where you buy your memory cards. Fakes are abundant on many online marketplaces, so opt for a retailer that you trust. You can test the speed of your card using free tools like CrystalDiskMark (Windows) or Blackmagic Disk Speed Test (Mac) to ensure you’re getting the performance you’ve paid for.

Are Cartridges or Internal Memory Faster?

According to tests performed by Digital Foundry, physical cartridges (game cards) have the slowest read times of all, while the console’s internal flash memory provides the fastest load times.

Games stored on microSD cards were marginally faster to load when compared with a physical cartridge (usually under a second when fast traveling in The Legend of Zelda: Breath of the Wild), but still trailed the internal storage by up to several seconds in that same game.

This bolsters the theory that the Switch is limited to around 100MB/sec read speed in terms of removable media, since it’s unlikely that a microSD card would be able to achieve higher read speeds than internal flash memory.

Ultimately, there’s not a huge amount of difference between the three mediums and it shouldn’t influence where or how you decide to store your games.

Transferring Games Between Storage Is Tedious

It’s a good idea to buy a memory card as soon as you get your Switch console since Nintendo doesn’t make it particularly easy to transfer games between the internal storage and removable microSD cards. The only way to do this is to archive the software and re-download it again to the microSD card.

This takes time, bandwidth, and patience. We’d recommend buying an adequately-sized microSD card that suits your gaming habits. If you play a lot of games and bounce between titles regularly, a larger pool of storage will be of benefit. For casual gamers, a 128GB or 256GB card will likely be enough for the lifespan of the console.

Aside from a better display, the revised OLED Switch ships with 64GB of internal storage, double the original and Switch Lite models. This is still a paltry amount of space considering how some games balloon to 30GB or more in size, so we definitely recommend a memory card.

The latest iteration of the Nintendo Switch has an OLED screen that has deeper blacks for a better-looking portable experience, and 64GB of internal memory (up for 32GB on the previous models).

Whether or not you buy physical game cartridges may also influence your decision. Most cartridge releases are big-budget games that tend to be larger than smaller indie eShop titles. If you’re going to be downloading games like Mario Odyssey or the latest open-world Zelda title, you’ll want a larger microSD card.

It’s worth noting that save data is handled differently from game data on the Switch, which makes transferring save data between Switch consoles a relatively painless affair. You can also transfer Switch screenshots and videos over USB to quickly free up some space.

Spend on Capacity, Not Speed

With UHS-I memory cards of 256GB and 512GB now more affordable than ever, you’re better off spending money on capacity rather than speed. If you’re buying a memory card you intend to repurpose at a later date (for example in a camera or smartphone) then a faster memory card might be of use to you down the line.

It’s easy to underestimate just how much storage you will need, so learn how to free up space on your Switch so you can keep playing new games.