Windows 10 has just received a fix for the Blue Screen of Death “APC_INDEX_MISMATCH” and “win32kfull.sys” errors. For version 20H2 / 2004, Windows 10 KB5001567 is currently rolling out via Windows Update and it fixes all the printer issues which were accidentally caused by KB5000802 and other security updates.

As you may recall, Windows 10 KB5000802, KB5000803, KB5000808 and other cumulative updates released on March 9 proved seriously troublesome for devices using certain printer drivers. After the update, users were unable to use printers from popular brands, such as Kyocera, Ricoh and others.

In some cases, Windows 10 KB5000802 update also resulted in issues for software-based printing, which includes LibreOffice, Notepad, and even print to PDF functionality was affected in rare cases.

Fortunately, a proper fix is now rolling out to fix all your printer and Blue Screen of Death issues. For version 20H2, the hotfix is in the form of Windows 10 KB5001567, which is currently marked as “optional quality update”.

If you check for updates today, you’ll see the following update under the “optional quality update available” section:

For those on older versions of Windows 10, a new optional hotfix update is available for your device too.

If you’re still using version 1903/1909, Microsoft says your device will receive Windows 10 KB5001566 to fix an issue that might cause blue screen “APC_INDEX_MISMATCH” when using apps to print to certain printers.

Here’s a list of all cumulative updates released to fix the “APC_INDEX_MISMATCH for win32kfull.sys” error:

How to get the fix now

It’s worth noting that this fix won’t be downloaded and installed on your computer automatically, at least not yet. 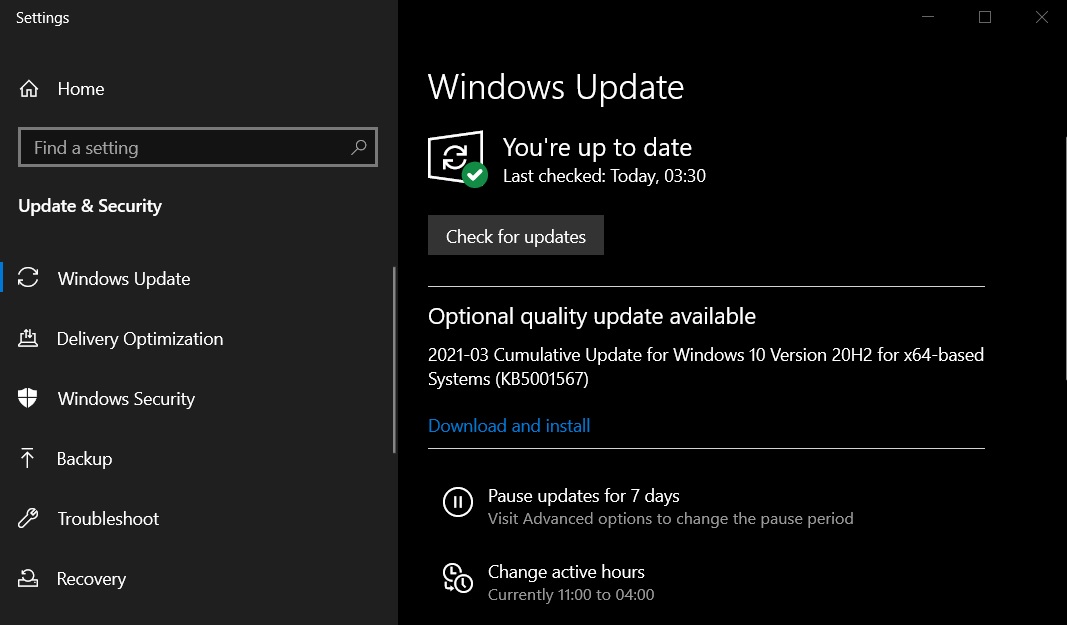 If you want the patch now, you can grab the cumulative update by downloading it manually from Windows Update. As you can see in the above screenshot, you can apply the hotfix by clicking on the “Download and install” button. Once done, you’ll need to reboot your device to fix the printing bugs.

The second method to get the cumulative update is by directly downloading it from the Microsoft Update Catalog, where you’ll find the download links for 32-bit and 64-bit Windows 10 respectively.

It’s also important to note that Microsoft is planning to include these fixes in April 2021 cumulative updates (Patch Tuesday), which is currently scheduled to launch on April 13.