The change is as minor as it gets, and most customers whose systems were not compatible previously are left hanging. The requirements prevent Windows 10 systems that don’t meet the minimum system requirements from being upgraded to Windows 11 using Windows Update. The new operating system won’t be offered via Windows Update. 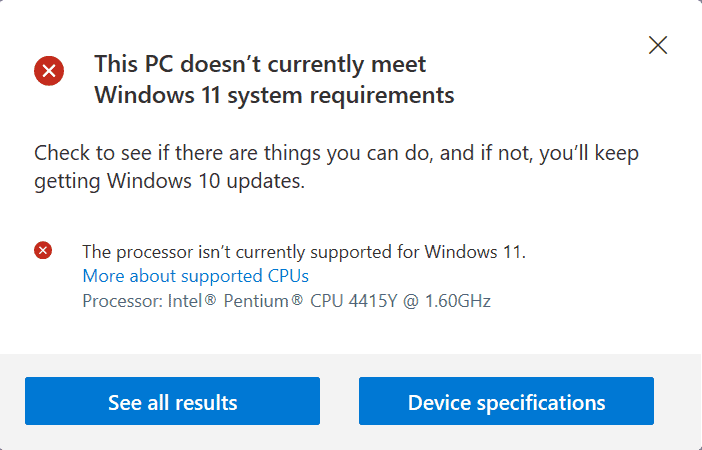 Windows 11 can be installed on non-compatible devices using installation media, e.g. by using the Media Creation Tool. Some requirements do need to be met, e.g. that the system has enough storage available, but the installation is not prevented if the processor is not on the list of supported processors.

The requirements that still need to be met are:

Details are not clear at this point. It is unclear if administrators may opt-in to keep installed applications, settings and files, or if only a blank slate installation is allowed on incompatible systems.

Microsoft told The Verge that the option to circumvent the minimum requirements are designed for businesses and organizations primarily to evaluate Windows 11. Microsoft does not provide any guarantees in regards to system reliability or driver compatibility in this case, but won’t block customers, home or organizational, from installing Windows 11 on incompatible systems.

Microsoft contacted The Verge after the original story was published, stating that non-compatible systems may not be eligible for receiving updates with Windows Updates. If true, it would certainly reduce the incentive to install Windows 11 on non-compatible systems, even if it is still possible to install updates manually by downloading them from the Microsoft Update Catalog website.

Being able to install Windows 11 on incompatible systems is a welcome step in the right direction. Still, it seems likely that millions of devices will have to stay on Windows 10 or earlier versions of Windows due to these restrictions.

The confusion surrounding Windows 11 updates will hopefully sort itself out before Microsoft releases the operating system officially. If not, it is creating a divide in the userbase, and that is probably something that Microsoft does not want either.