The company was not talking about its Your Phone app and application mirroring technique, but native support for Android apps. Since Google’s Play Store was out of the question, Microsoft came to an agreement with Amazon to integrate Amazon AppStore support into Windows 11.

Users of Windows 11 can browse the store, install and manage apps and games available on it, and use them on their devices. 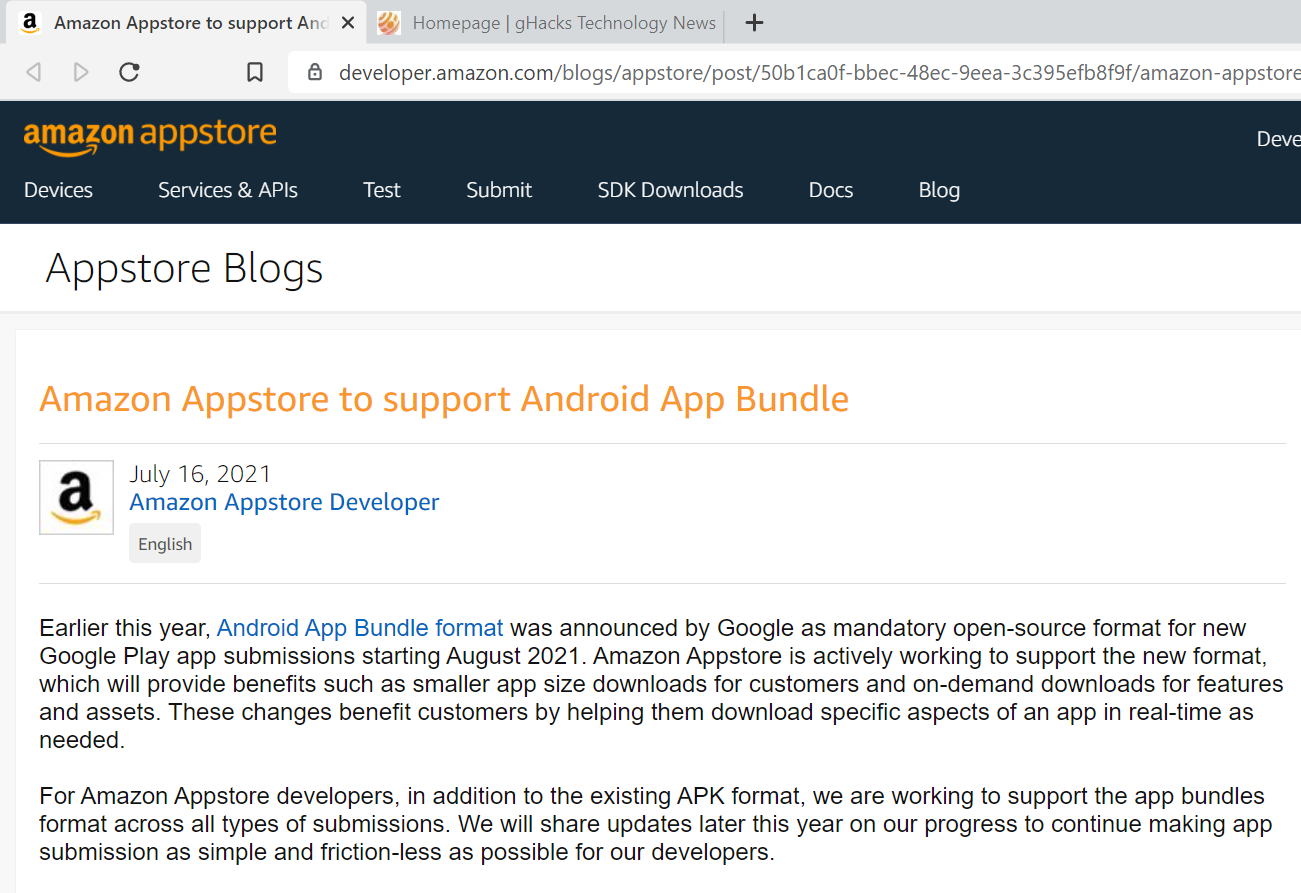 Google, in the meantime, announced that it will make the switch from using the currently used APK format for Android applications to the new App Bundle format. Starting in August 2021, Android developers need to submit their applications in the new format to the Google Play store.

The App Bundle format has some advantages, including smaller distribution sizes. One downside of the approach is that the new format is finetuned for specific devices, which means that it will be more difficult to extract the app and make it available for distribution elsewhere. Currently, APK files will work on most devices that match the architectural requirements. In the future, numerous files are required to offer these applications for sideloading.

Developers may still release their apps as APK files. The change would impact the availability of apps on Windows 11, as sideloading would be more difficult.

Amazon confirmed this week that its store will support the App Bundle format.

Amazon Appstore is actively working to support the new format, which will provide benefits such as smaller app size downloads for customers and on-demand downloads for features and assets. These changes benefit customers by helping them download specific aspects of an app in real-time as needed.

Unlike on Google Play, App Bundles remains an optional format in the Amazon Appstore. Developers may continue to upload APK files for their apps, or use the new format once it is supported.

Another difference between Google Play and Amazon Appstore requirements is that Google requires that developers submit their app signing key while Amazon does not.

Microsoft’s Windows 11 operating system benefits from Amazon’s decision, as it ensures that the new format is also supported on Microsoft’s next version of Windows.

Google Play has the edge when it comes to apps and games that are available, but Microsoft pushing Android apps on Windows through Amazon’s AppStore could help bring the app offerings closer together. Amazon’s store may also benefit from the decision to support the App Bundle format without requesting the signing key of developers and publishers.