Microsoft rolled out Windows 11 Build 22581 a few days ago for users in the Developer and Beta Channel of the Insider Preview Program. While it brought some bug fixes, it has apparently introduced a new issue.

A reddit user found that videos were opening slowly after installing the latest build on their computer. They also discovered what was causing these delays. It turns out the culprit was none other than the operating system’s default antivirus, Windows Security, commonly known as Windows Defender. More specifically, it was the SmartScreen component of the Security app that was causing this problem.

Other users chimed in saying they had a similar problem, i.e., the movies would not open immediately, and it took a while (about 30 seconds) before the media began playing.

How to fix videos opening slowly in Windows 11 Beta

1. Open the Windows Security app, aka Defender, by clicking on its icon on the system tray.

2. Select the “App and browser control” tab on the sidebar.

4. Disable the first toggle on this page, under “Check apps and files”. You will need to be signed in with an Administrator account, to allow the UAC Prompt, to confirm the change.

5. Play a video and it should open normally. 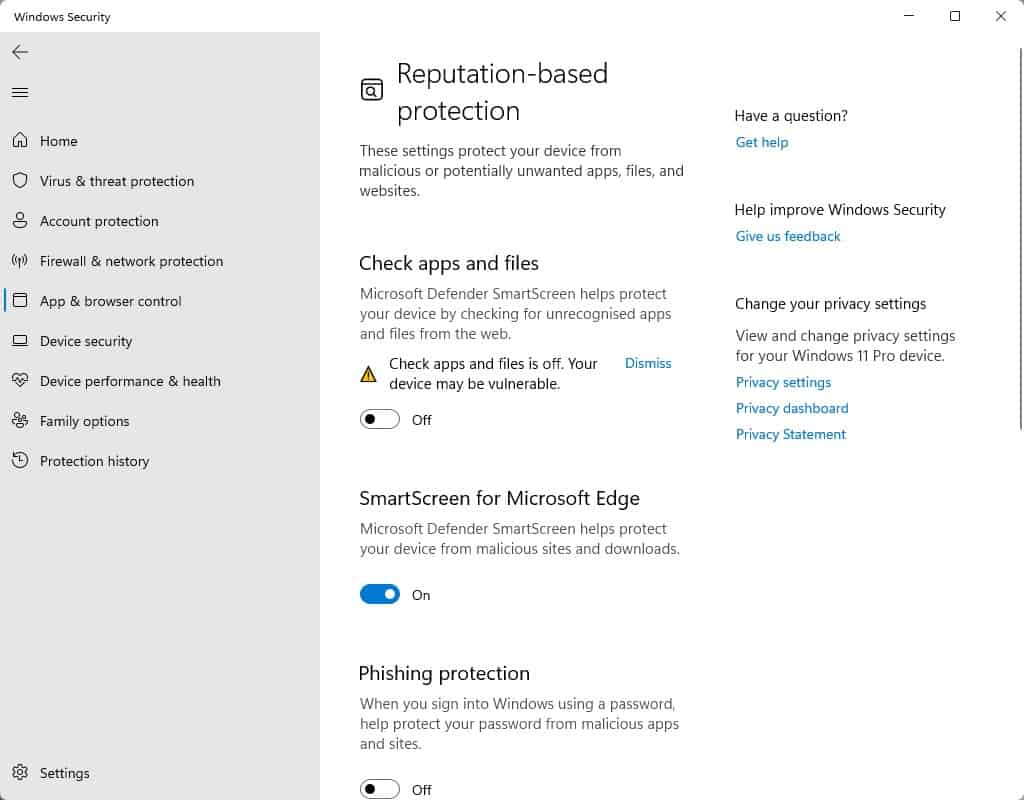 This option is enabled by default in all build of Windows. It is unclear why SmartScreen is triggering the checks with Windows 11 Build 22581. Microsoft has not acknowledged the issue yet.

Why does this happen? SmartScreen provides an additional layer of security, that protects users when they execute files or programs that are not popular. When the user tries to run such a file, it flags it for a scan, to ensure no malware is lurking in it. In theory, it is a good feature, but the implementation does have its drawbacks, case in point.

This is not the first time users have run into performance issues with Windows 11. There was an issue related to SSDs slowing down, but Microsoft patched the bug in the KB5008353 Windows Update.

Earlier this month, AMD confirmed that the operating system was performing poorly on Ryzen powered computers, and that it would work with Microsoft to fix the issue. An update is expected to be announced in Summer 2022. The addition of Teams and Widgets has also been criticized among the tech community, after they were found to be using resources in the background. Neowin reports that Microsoft’s Endpoint for Defender recently flagged Office updates as malware, leaving the Redmond-based company with an egg on its face.

If you are still in the Dev Channel and want to switch to the Beta Releases, you should update to Build 22581 as soon as possible. This limited time window will be closed soon, with the release of the next build that is expected to drop this week. You cannot switch to the Release Channel just yet, an option to move to it could be made available as we approach the release of Windows 11 22H2 Sun Valley Update that is said to be released in the coming months.

The post Windows Defender is causing videos to open slowly in Windows 11 Beta; here’s how to fix it appeared first on gHacks Technology News.