After upgrading the system from an older Windows version, say Windows 8 to a new Windows version, say Windows 10 or Windows 11, some users receive the “Windows did not detect any networking hardware” error message. On the other hand, some users received this error message after installing a Windows update. If Windows does not detect networking hardware, you will not be able to connect your system to the internet. Today, most of our work requires an internet connection. Hence, this error makes our system nearly useless. If you encounter this error on your system, the solutions provided in this post may help you fix it. 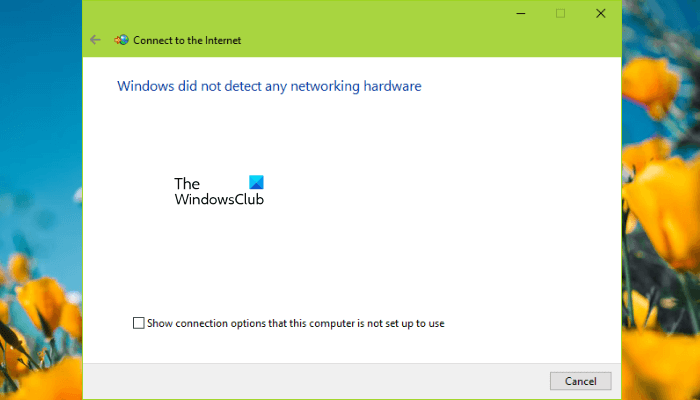 Windows did not detect any networking hardware

Try the following solutions to resolve this issue.

Let’s see all these fixes in detail.

The steps to run the Network Adapter Troubleshooter are as follows:

Now, check if the issue persists.

2] Roll Back your Network driver

If the Network Adapter is showing in the Device Manager but your system cannot connect to the internet, you can try rolling back your Network driver. This trick fixed the issue of some users. You can roll back your device drivers from the Device Manager.

The steps to roll back the Network driver are as follows:

After rolling back your Network driver, check if the issue persists.

Some users have found the Network driver missing from the Device Manager. In this case, manually installing the Network driver will fix the issue. You have to download the driver from your computer manufacturer’s official website and then install it manually.

Because your computer is not connected to the internet, you have to use another computer to download the driver. Now, move the downloaded driver to your computer using a Pen Drive and install it on your system.

If the Device Manager is already showing your Network driver but your system is showing the “Windows did not detect any networking hardware” error message, follow the steps written below:

Some users have found the Network driver missing from the Device Manager after updating their system. In this case, uninstalling the recent Windows Update will fix the problem. You can uninstall Windows Updates from Windows 11/10 Settings.

Some users have found Marvell Avaster Wireless-AC Network Controller the cause of this issue. Open the Device Manager and check if this wireless adapter is installed on your system. If yes, disable its Selective Suspend property. The following steps will guide you on this:

Now, check if the issue persists.

The issue might also be occurring due to the DNI_DNE component. You can check if this component is installed on your system by running the following command in the elevated Command Prompt.

After opening the administrator Command prompt, copy and paste the above command into it. Hit Enter and see its output. If the output shows DNI_DNE, you have to delete the DNI_DNE component from your system. To do so, open the Command Prompt as an administrator and copy and paste the following commands into it one by one. Press Enter after pasting each command.

The following commands will delete a key from Windows Registry. Therefore, it will be better if you create a System Restore Point and back up your Registry before proceeding.

If you get an error after executing the first command, execute it again without va. This should work. The command, in this case, is as follows:

Press the Win + R keys to launch the Run command box. Type regedit and click OK. Click Yes in the UAC prompt. This command will open the Registry Editor.

Copy the following path and paste it into the address bar of the Registry Editor. After that, press Enter.

Close the Registry Editor and restart your computer. After restarting your device, the problem should get fixed.

What happens if Windows does not detect a Network adapter?

If Windows doesn’t detect the Network adapter, you will not be able to connect your computer to the internet. A driver acts as a connecting link between hardware and the operating system. If a driver malfunction or if Windows is not able to detect the driver, the respective device will not work.

How do I fix the Network adapter not found?

Open the Device Manager and expand the Network adapters node. See if there is a warning exclamation sign on your Network adapter. If yes, uninstall it and restart your computer. Windows will automatically detect the hardware changes on the restart and install the missing driver. Or you can also download the latest version of your Network adapter from your computer manufacturer’s official website and install it manually. If you are not connected to the internet, you can use your friend’s computer to download the driver.