Microsoft has released a new Office Insider Preview Build 14405.20002 for Windows users registered in the Beta Channel of the Office Insider program. The new build adds an important new feature for those who collaborate with others on Word. The new feature adds some improvements to the Track Changes feature, giving you the power to turn on Track Changes only to yourself. Prior to this, on turning on the Track Changes feature, everyone’s changes were automatically tracked. This will no longer be the case if you select the Just Mine option by going to the Review tab and opening the dropdown menu on the Track Changes button.

Moreover, the new Office build also includes fixes for issues found in Word, Excel, and Outlook. You can read the full official changelog below to know more.

Collaborating with others is a key part of producing great content in Word, and the Track Changes feature is an essential part of that process. Previously, when you turned on Track Changes, everyone’s changes were automatically tracked. But sometimes you only want your own changes to be tracked, without forcing this setting on others. Now we’ve given you the power to turn on Track Changes only for yourself. To do so, go to the Review tab and open the dropdown menu on the Track Changes button; then select Just Mine. 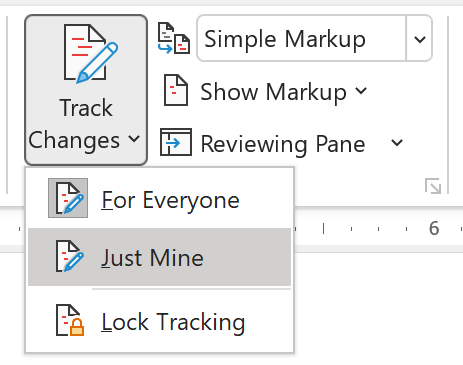