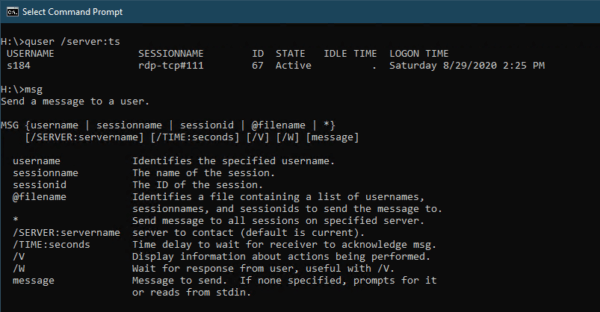 Windows has a command-line called msg that lets you send a text message to another user, either on the same computer like terminal server or on another computer on the same network. The syntax of the command is fairly easy and straightforward.

For example, to send a quick message to another user on the same terminal server:

To send a message to a user on another computer,

To send a message to all users on a remote computer,

Note that if you are messaging to all using “*”, you may receive an error message saying that Error [5]: Access is denied. No worry here. That’s because all sessions you send the message to include a console session 0 that’s not supposed to be contacted. So, it’s safe to ignore the message.

The message you send via the commands above will be quick messages, mostly just one-liner without the line breaks, etc.. But what if you need to send a message that’s more than a one-liner?

Here is a quick trick for you.

You can save all the content into a text file and then use the following command to send it.

Here is another thing you should be aware of if you are to send messages to a group of computers. It takes time before it times out if the remote computer is offline. So to avoid taking too much time, you need to make sure the target computer is online before sending the message. If you are programming it in PowerShell, use Test-Connection cmdlet before the msg command.

What’s even better, find out who’s logged in the computer so you can send messages directly to that user.

The post Windows Tip to Broadcast Messages to Other Computer Users appeared first on Next of Windows.