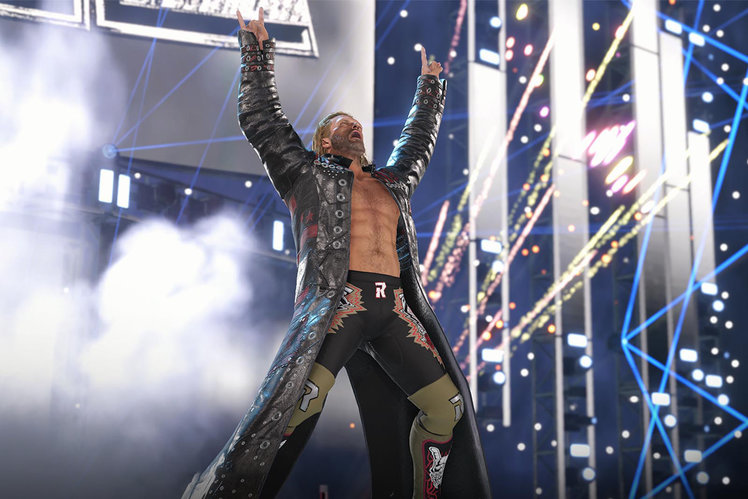 We have been pro wrestling fans for a few decades, having followed the exploits of WWE, WCW, NJPW, Ring of Honor, the UK’s Progress Wrestling and, more recently, AEW. We have also been fans of the various game series that have aped the in-ring exploits of larger than life stars, both licensed and invented.

However, WWE 2K20 was so bad it almost broke our love affair with the gaming side of that passion. Its launch was a disaster, riddled with more bugs than you’d find in a Bushwhacker’s beard and presenting a game engine seemingly stuck together with discarded finger tape. Visual Concepts took sole development duties from Japanese wrestling game expert and series stalwart Jukes and subsequently dumped it on its head during a failed piledriver.

2K Games thankfully acknowledged the mistake and gave the studio some time to go back to the drawing board – two years, in fact – to partly reinvent the game mechanics and reboot the franchise. And it’s worked. WWE 2K22 isn’t just an improvement, it is the best iteration we’ve had in many years, especially on the current-gen consoles. It’s not perfect and still delivers the occasional graphical anomaly or glitch, plus tag team wrestling is as cumbersome as ever, but it’s a game WWE fans will really enjoy.

Part of the appeal is the back-to-basics approach to the game modes and presentation. Gone are the crazy, fantasy themes of the last game, replaced by options that better suit WWE programming.

There’s a story mode again, MyRise, but this time it focuses on a more “realistic” rise to fame for a created wrestler, through the WWE Performance Center and onto at least one of the main TV brands – Raw, Smackdown, NXT. There’s also the usual Universe mode, which many have loved in the past. And Showcase mode this time features classic moments in cover star Rey Mysterio’s career to reenact.

Perhaps most interestingly, though, there’s a couple of new classic modes – MyFaction and MyGM – that provide different ways to enjoy the action.

MyFaction is essentially the game’s Ultimate Team, whereby you collect superstars, managers and items, put them together in teams and use them to progress through increasingly harder single or multiplayer match-ups. Win and you have the chance to earn new packs and, therefore, better stars to put in your team. Yes, as with the likes of FIFA, Madden and 2K’s own NBA title, this does offer easy routes to success through a real-world payment system, but we found it interesting and fun enough without dropping a dime. 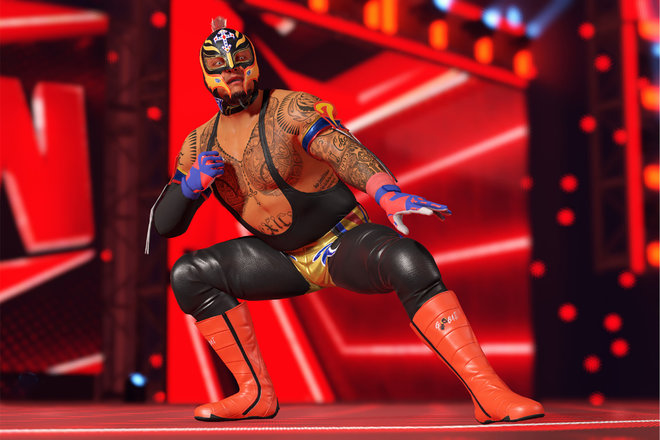 MyGM is a little different in that it’s a mode returning to the series after a lengthy absence. It puts you in the shoes of a general manager – from Adam Pierce, William Regal, Stephanie MacMahon, or Sonia Deville – and you must draft superstars and subsequently book them onto your chosen brand’s TV show. It’s a management game of sorts where you can either play the matches or just simulate them. You go head-to-head with another GM and the one with the highest TV ratings by a set time limit will win. It’s pretty simple stuff and doesn’t take long to play, but it’s nice to see it back – and we expect it’ll be further fleshed out in future games.

Then, of course, there are the WWE game staples, such as create-a-wrestler (CAW), create an entrance, that sort of thing. Plus multiplayer options for one-off matches. Indeed, we can’t remember a title in the franchise as dripping with options – at least in recent times.

Even the roster is crammed to the rafters, albeit with many stars who have since been moved on from WWE or decamped to rivals. 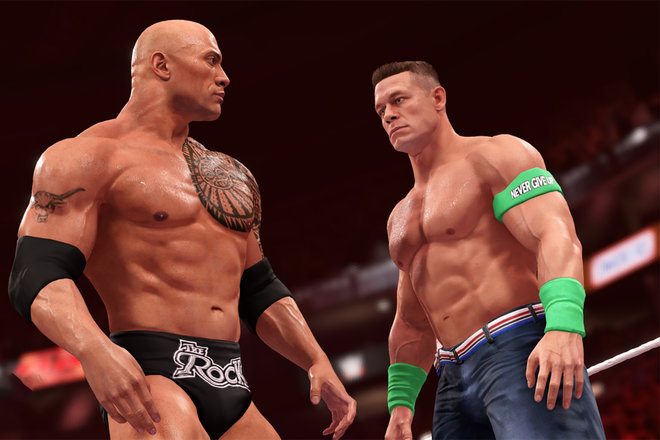 In many ways, the fact that likes of the Iconics (now at Impact), Keith Lee (AEW), Kyle O’Reilly (AEW), Isiah “Swerve” Scott (AEW), Jeff Hardy (AEW), and Karrion Kross (MLW) are still in the game allows for some dream cross-promotion matches. Many of them were controversially released by WWE too, so you at least get a chance to make up your own “what if?” storylines.

There are plenty of legends on the roster too, plus more to come in future DLC packs, and one of the great things about the new game engine is playing as many of them provides plenty of variety. That’s because, while much of it will feel familiar, a lot of work has been done to reduce the grind and make in-ring action as fluid as it can be in real life.

The limited reversal system from the last game has been completely ditched, with a new, more intuitive one introduced in its place. The window for reversals also seems wider, so you no longer have to mash the button while hoping you get the timing right.

Plus, for grapples, there are new hard and light grapple options and you can counter them by pressing the correct hard or light button on the controller at the right time, rather than the reversal button. This adds an additional strategic element, plus more variety and flow to bouts. It also rewards player skill a touch more than before, leading to some excellent matches once you get used to the system. 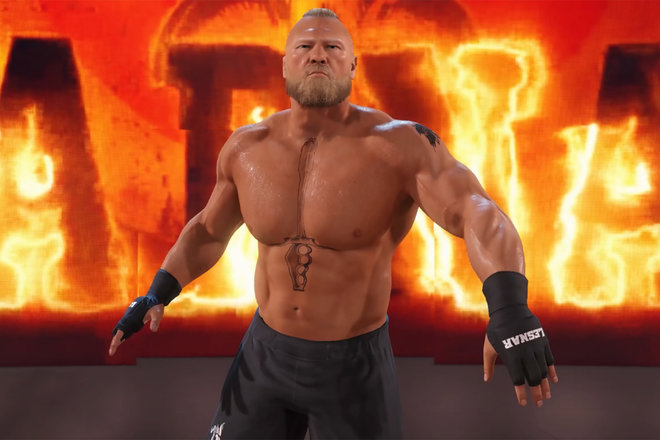 Added to that, you can now block strikes and superstars have smoother and faster animations so there are fewer times where you have to wait an age for one move to finish before you can interact again. And then there are combos: various combinations of light and hard strikes followed up with a grapple. In short, WWE 2K22 actually feels like a fighting game at last.

That’s not to say it all works. Tag team matches and some of the special events with more than one wrestler in the ring can still be a slog. A three-on-three tag match, for example, can take untold pin attempts to win as rivals persistently run in to break it up and you only have enough time to knock one off the apron before your prone victim recovers. But hey, baby steps we suppose.

When it came to graphics, WWE 2K20 was critically slaughtered. Thankfully, things are significantly better in 2K22. 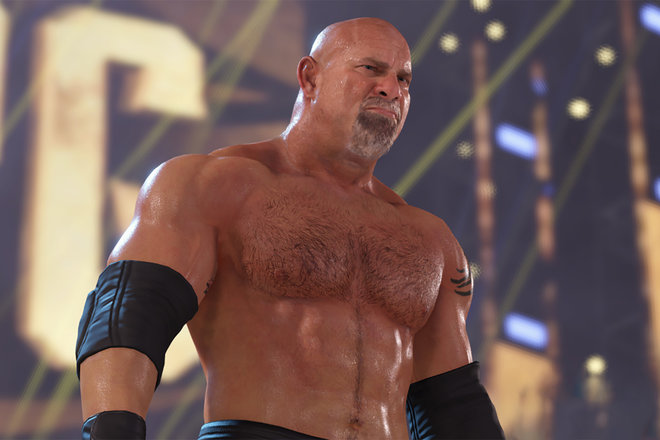 On current-gen consoles – PS5 (as tested) and Xbox Series X/S – that results in a more realistic look overall, with much better superstar models and animation. Many of them may no longer wrestle for WWE, but they certainly look the part. The arenas do too.

The lighting engine has been overhauled, which benefits the roster and your own created wrestlers, while the action can sometimes look so convincing that, in Showcase mode, you are often treated to video of a real fight blending seamlessly into a playable sequence.

The physics engine seems to have been tweaked too. Wrestlers interact with the ropes and weapons better, while hair and clothing move in a more flowing fashion with less clipping. It must be said that we still get some oddities – Bianca Bel Air’s braid still has a life of its own sometimes, but at least it no longer looks like she’s swinging around a dead snake. 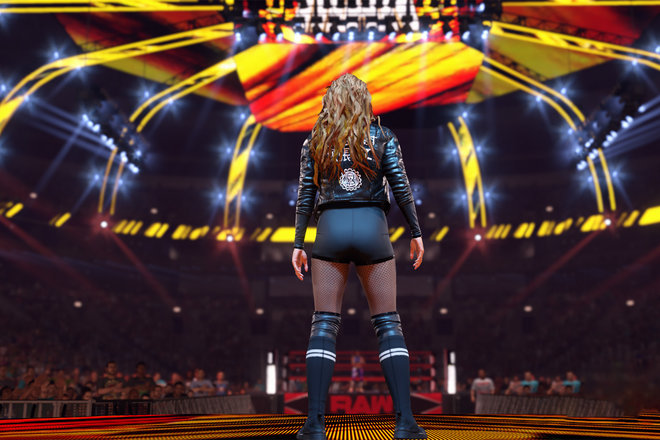 The game’s soundtrack has been curated by Machine Gun Kelly, who will also be a playable wrestler in future DLC, but is generally standard rock and rap fare, much like in previous WWE games. There’s a lot more commentary, voice acting and general grunts and effects though, of which we heartily approve.