Wyze is a popular option for budget Wi-Fi security cameras, smart bulbs, and door locks, but its latest Wyze Lock Bolt is even more affordable, at just $69.

Today, Wyze announced and released the new Lock Bolt, a Bluetooth-connected smart lock that’ll help you unlock your door with just a single tap. One of our biggest complaints with the original Wyze Smart Lock was the lack of a number pad, making it a pain to use at times.

The new Lock Bolt includes a built-in number pad and a biometric fingerprint scanner. That way, all you have to do is tap the lock to open your door quickly. It’s fast, easy, and supports up to 50 different fingerprints.

Unfortunately, the Wyze Lock Bolt doesn’t offer Wi-Fi, so you can’t remotely lock or unlock the door, nor does it have the auto-unlock option. Instead, you’ll just use the fingerprint sensor, a code, or unlock it via the app over Bluetooth. That said, the auto-unlock feature was finicky on the original, so we’re glad to see this new model come with additional options.

The Wyze Lock Bolt completely replaces your deadbolt on the inside and the outside. It features a fast and secure biometric fingerprint scanner (like what comes on many smartphones) to instantly unlock the door in less than one second. Then, there’s a backlit number pad for ease of use.

Along with adding up to 50 different fingerprints, Wyze says it supports 20 different number pad combinations and works with up to 20 different users. The new Wyze Lock Bolt also features auto-lock, where you can set it to auto-lock after a set amount of time, which may be helpful considering it doesn’t offer Wi-Fi connectivity. There’s also an anti-peep mode, where you can enter extra digits before or after the actual code in case someone is watching, and it’ll still unlock.

Using the Wyze app, owners can set one-time custom codes, see a complete lock/unlock history list, including if the door was opened with a pin or a fingerprint, remove users, and more. However, it’s important to remember that you’ll have to be nearby and connected over Bluetooth to check the history or create new unlock codes.

You can get the Wyze Lock Bolt today for $69.99 or $59.99 for Cam Plus subscribers by clicking the buy link below. 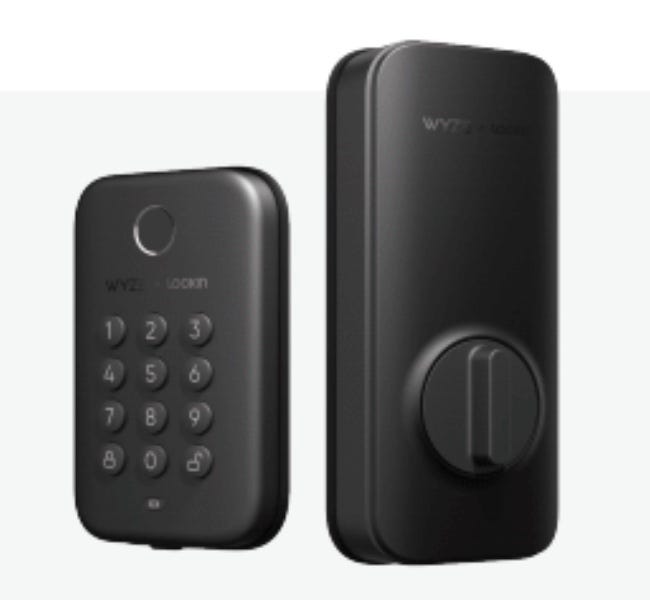 Get the new Wyze Lock Bolt with a built-in fingerprint scanner and number pad for $69.99.