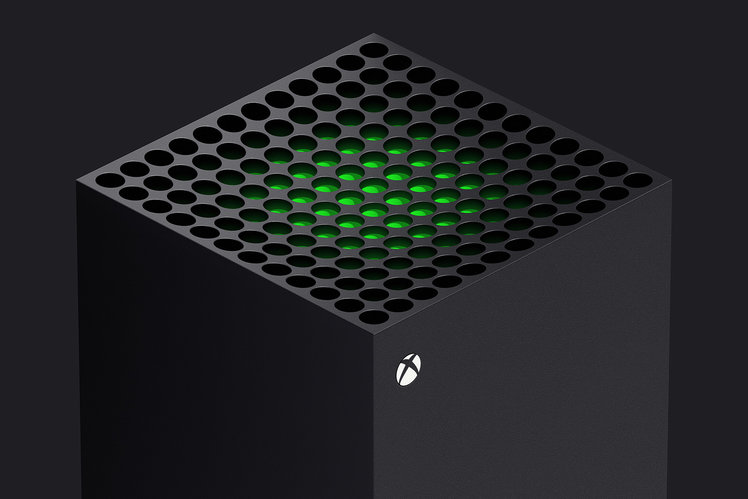 The current generation of Xbox One gaming is coming to an end, with the next on the imminent horizon.

The Xbox Series X is being touted as Microsoft’s “fastest, most powerful console ever” and on paper it’s easy to see why. Indeed, in terms of its specification it even overshadows the PlayStation 5, which will be released at the same time.

So, here is everything you need to know about the Xbox Series X, including the newly announced release date, plus all the specs.

And for those looking for info on the prospective cheaper version – the Xbox Series – we’re also tracking all the latest rumours on that console here.

What is Xbox Series X?

First teased in 2018 under the name Project Scarlett, the Xbox Series X is Microsoft’s next-generation machine coming to take on the PS5.

It was officially unveiled at The Game Awards on 12 December 2019, with the design shown for the first time, but we’ve learned much more since. 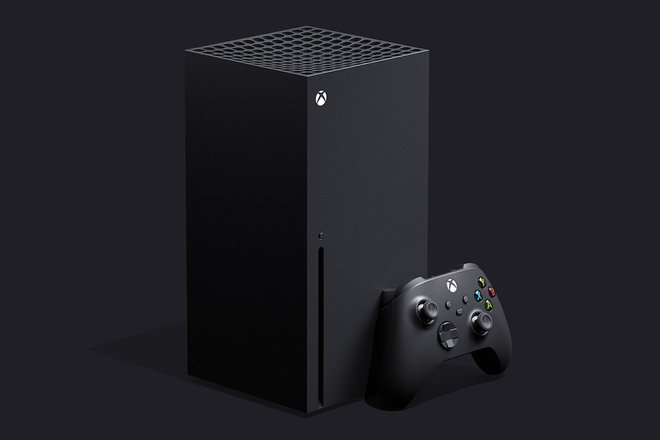 Built like a monolithic stack, which more resembles a mini-tower PC than a traditional games console, it can be stood on its end vertically or placed horizontally – presumably to fit in a TV stand or AV rack.

It is stark and aesthetically more practical than pretty. The grille at the top/right-hand side is to be used primarily for heat dissipation, while the only other distinguishing features are its 4K Blu-ray drive slot and ports on the rear.

In preparation for the new console, the Xbox One X has been discontinued (in addition to the digital edition of the Xbox One S).

In August, a prototype model of the Xbox Series X was exhibited at the Xperion E-Arena in Saturn, Germany and subsequently photographed by Twitter user and Xbox fan @KeemaMr.

Xbox Series X was exhibited at the Xperion e-arena in Saturn (Germany) pic.twitter.com/xiMvia1FnX

Xbox Series X will officially be available from “Holiday 2020”. However, in a statement announcing the delay of launch game Halo Infinite to 2021, it was “confirmed” that the console will arrive in November. It wasn’t more specific, but matches a previous leak on one of the official, regional Xbox websites, and subsequent comment by a Microsoft executive.

The aforementioned site accidentally posted a banner claiming that the new console was coming “Thanksgiving 2020”. We guesstimate, therefore, that it will launch on the Friday before Thanksgiving: 20 November 2020. That is directly equivalent to the release day of the original Xbox One in 2013.

The price of the Xbox Series X is yet to be officially revealed, but there have been clues as to how much it could cost.

In April 2020, Xbox boss Phil Spencer said that he feels “good about the price that we’re going to be able to get to”. He has also revealed that the company could respond to the price Sony sets for the PlayStation 5, if needed.

Then, in August, a podcast host claimed to have talked with retail outlets which revealed that the Xbox Series X (not the cheaper Series S) will be priced at $599 in the US. If the current Xbox One pricing model is any indication, that would mean it will be priced around £500 in the UK.

Considering the Xbox One X launched at £450, that’s not too much of a stretch. And, while clearly expensive, it does match our expectations based on the specifications. 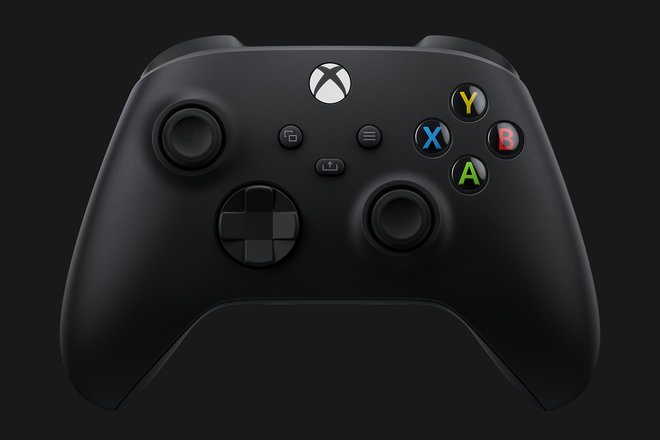 One neat feature of the new console will be that it will work with all current Xbox One accessories – including its controllers. That means, you can still use an existing Xbox One controller on the Series X, potentially lowering the cost for local multiplayer gaming for two players or more.

Xbox revealed the full specifications of the Xbox Series X in mid-March 2020. 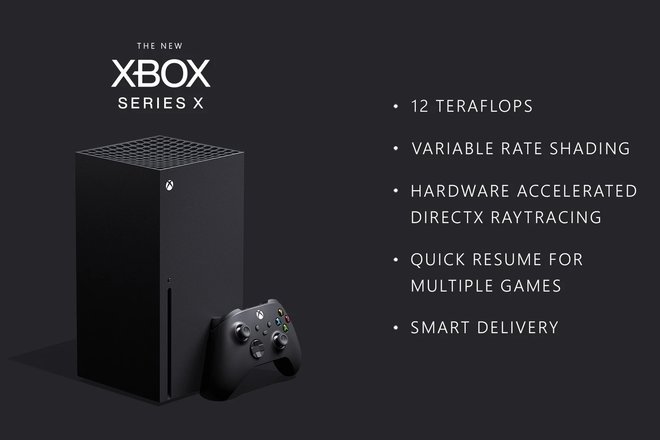 The console will utilise the latest chipsets and architecture from AMD – with the processing unit to be custom and based on the powerful Zen 2 Ryzen. It is eight-core, with each core running at up to 3.8GHz.

That is said to be four times more powerful than the processing hardware inside the Xbox One X.

The GPU is also custom and based on Radeon RDNA 2 architectures. It has 12 teraflops of processing power – double that of the Xbox One X. That makes it more than capable of native 4K 60fps gaming.

It also, potentially, allows the machine to achieve up to 8K resolution and/or run games in up to 120 frames per second. It supports real-time ray-tracing, as seen on the high-end Nvidia graphics cards released in the last couple of years.

A custom form of Variable Rate Shading will be on board, enabling developers to prioritise individual effects on specific on-screen elements rather than needing to refresh every pixel on screen for each GPU cycle. This, in effect, makes higher end, higher resolution graphics more efficient and, therefore, could allow for those greater frame rates mentioned.

There’s 16GB of GDDR6 RAM available to developers too, with 13GB set aside for gaming.

An internal 1TB SSD (solid-state drive) is available for storage, which speeds up data access dramatically. And there is an expansion slot on the rear to add an optional, proprietary 1TB SSD card.

The Xbox Series X is also capable of using external USB 3.0 hard drives, much like the Xbox One family.

In terms of connectivity, the rear of the Xbox Series X features ports for power, Ethernet LAN, two USB 3.2 ports, and one HDMI 2.1 out. There is also a “storage expansion” that is for the optional, proprietary SSD card. 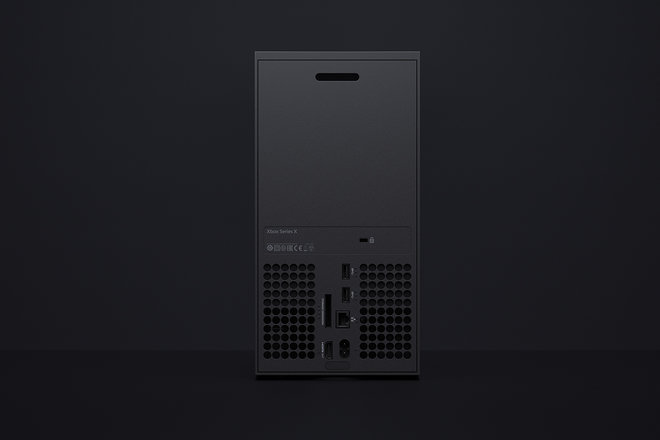 Conspicuous by its absence is a USB-C port.

The front slot is for the 4K Ultra HD Blu-ray physical disc drive.

Several key features have been confirmed.

For a start, Xbox Series X will be fully backward compatible with all Xbox One accessories, controllers and games.

One neat feature is that it can add virtual HDR to older original Xbox and Xbox 360 games, it will also intelligently upscale them and can improve their frame rates without any further development.

It will also support Xbox Game Pass – Microsoft’s game subscription service that gives you access to more than 200 games to download and play for one monthly fee. Xbox Series X games to come to the service will include Halo Infinite. Indeed, Microsoft has now ended yearly Xbox Live Gold passes with the intention of pushing Game Pass.

Those who subscribe to Xbox Game Pass Ultimate will also get unrestricted access to Microsoft’s cloud gaming platform, Project xCloud, which is launching as a full service in September. It enables more than 100 games to be played on mobile, with Xbox One titles initially and Series X versions added in time.

Another neat feature when it comes to games support is Smart Delivery. This is a cross-buy scheme that allows you to purchase Xbox One games ahead of purchasing an Xbox Series X and then upgrade them for free when you have the latest machine.

Xbox has committed to offering its own first-party games this way, but some third-party publishers are opting to offer Smart Delivery too. CD Projekt Red, for example, will give you the Xbox Series X version of Cyberpunk 2077 for free if you have already purchased the Xbox One version.

Smart Delivery games do not need to be swapped physically – the enhanced version will be downloaded onto your new console automatically.

Other big features include faster load times, thanks to the SSD, and Quick Resume.

Quick Resume effectively supes-up the game standby functionality found on the Xbox One. It enables a game to start nigh-on immediately from a suspended state, with several games able to be “paused” in this way.

That means you can switch between suspended games instantly.

Faster load times are easier to understand. Some games, even on the Xbox One X, can take ages to load initially and between in-game sections. The Xbox Series X will cut that time down considerably.

Some games will be designated as ‘Optimised for Xbox Series X’ which can mean they support either of the features above, have native 4K HDR graphics, sport 60fps, or provide any combination of them.

The new user experience will also launch for Xbox One, Xbox Game Pass for PC and a new Xbox mobile app when the Xbox Series X is finally made available. However, the next-gen machine will benefit most. The homescreen will load 30 per cent faster when booting than the current system on Xbox One, and 40 per cent faster when heading back to “home” during or after a game.

Many of the menus and tabs will be familiar to current Xbox owners, except the new design will feature rounded edge titles rather than sharp, square ones. Parties and chat will be integrated into the same tab too. You can watch a description video of the new user experience below.

All Xbox Series X launch games will also work on the existing Xbox One console series as well as Windows 10. And this has been confirmed to be the case for at least the next two years.

Sadly though, the console will no longer launch with Halo Infinite, the latest chapter in the Halo series, as the game has been delayed to 2021 – as revealed in an official tweet.

But Cyberpunk 2077, Assassin’s Creed: Valhalla, Dirt 5, The Medium and Outriders are among the titles also coming to the platform this year and Forza Motorsport, Senua’s Saga: Hellblade II and State of Decay 3 also coming in future.

Find out about the best upcoming Xbox Series X games.