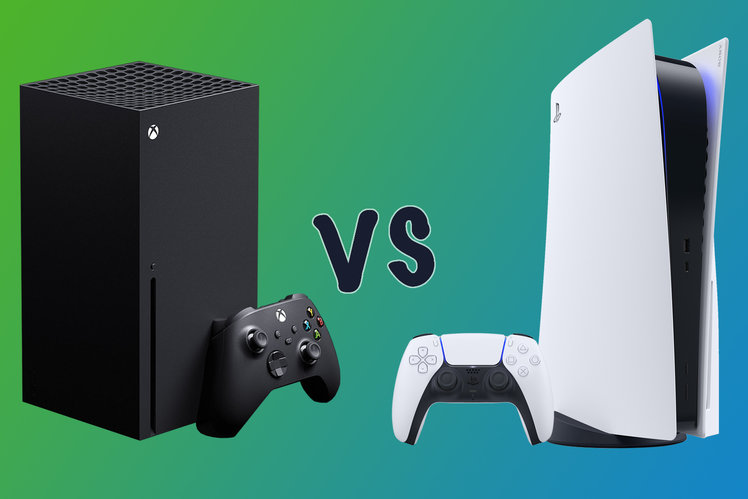 PlayStation and Xbox are head-to-head once again. The Xbox Series X is duking it out with the PlayStation 5 in the battle for next-gen supremacy and we’ve tested both in our Pocket-lint labs.

Here’s how they stack up against each other.

Oh, and if you want to compare the consoles with their sister models, check out our Xbox Series X vs Xbox Series S and PS5 vs PS5 Digital Edition features roo. 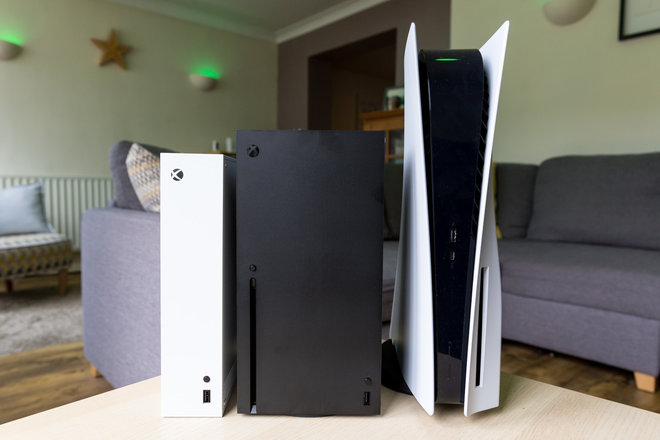 We are being treated to two very different-looking consoles. Quite unlike anything we’ve seen before – as you can see above, with both consoles shot alongside the smaller Xbox Series S.

The PS5 is massive – the tallest games console we’ve ever seen. It is also uniquely-designed, with two faceplates protecting the main console unit sandwiched between.

It retains some of the company’s flair for curves (remember the original PS3?) but adopts white as a launch colour for the first time. It can be stood on end or laid horizontally, but either way it could be struggle to fit it in an average-sized AV cabinet.

The PS5 Digital Edition dispenses with the disc drive, so is slightly thinner, but is still extremely tall.

Microsoft has gone for almost the opposite – chunky and squat. There are few curves to be found here. The Xbox Series X looks more like a mini-tower PC than a games console, which is essentially what it is. We suspect heat dissipation is playing the biggest role in the design of both next-gen machines this time around.

Luckily, the Series X too can also lie flat, not just stand on its end, so you’ll have a bit of control over how you align it near or under your TV.

Each of the new consoles is clearly and significantly more powerful than their predecessors, but by how much? And which is the most powerful full stop?

The Xbox Series X is “four times more powerful than Xbox One X”. It sports a custom Zen 2 eight-core processor running at 3.8GHz per core.

The PlayStation 5 runs on an eight-core Zen 2 processor too, but at 3.5GHz per core.

RAM inside both is similar: 16GB GDDR6.

This effectively means that developers could potentially eke more from the Series X than PS5. But, in reality, both display excellent handling over games with ray tracing, full resolutions, even 60fps enabled.

In terms of their initial graphics capabilities, both are ably matched with similar features.

Both manufacturers say that they will be able to output 8K video/games but that’s unlikely to be reached for some time (if ever) and is more that the HDMI 2.1 output on each has the bandwidth for it.

They each include support for ray tracing, which will put them on a par with modernPC graphics cards. It introduces accurate and realistic lighting to great effect.

SSD is where it is at with both next-gen consoles. Both have adopted solid state drives for storage in order to speed up loading times.

The Xbox Series X features a 1TB internal SDD, with approximately 802GB available to the user after system software, etc. The PS5’s has less storage space, with an 825GB SSD, but only 667GB of that is available for games.

This could be important to you as some modern games can be well over 100GB in size.

Both have the ability to increase that storage through expansion cards. In the case of Xbox, you can purchase an official 1TB Storage Expansion Card that slots into a dedicated port on the rear.

The Sony machine will also be able to be boosted, through third-party PCIe Gen4 SSD cards, but that option is not activated at launch, we understand.

Neither manufacturer wants to ditch the physical disc drive yet. Both the Xbox Series X and standard PS5 will sport 4K Ultra HD Blu-ray drives. Neither the PS5 Digital Edition nor Xbox Series S have disc drives though.

It’s worth noting that while the Xbox Series X is the only console to boast Dolby Vision support, for media streaming and future games, its 4K Blu-ray drive is not compatible with it at launch. The PS5 does not have Dolby Vision at all.

Here’s a major differentiator between the two consoles.

Xbox has Cloud Gaming with Xbox Game Pass Ultimate (formerly known as Project xCloud). It comes as part of the montly Game Pass Ultimate subscription service and allows you to play over 100 Xbox One and Xbox Series X/S games on mobile devices.

We are yet to see whether the PlayStation 5 supports PS Now – Sony’s own cloud gaming service.

Both PlayStation and Xbox backward compatibile with thousands of their respective back catalogues – often introducing performance and frame rate enhancements to older games.

In Xbox’s case, that means almost everything that runs on an Xbox One, including Xbox 360 and original Xbox games, will also work on Xbox Series X. In some cases where HDR wasn’t originally implemented, they will even make use of the console’s Auto HDR feature for a wider colour gamut and greater contrast.

All Xbox One accessories work on Xbox Series X (and S) too.

The PlayStation 5 is also compatible with the vast majority of PS4 games already out there. And the PS4 DualShock controller will work with them running on a PS5. It won’t be able to be used to play native PS5 games, however.

Other older accessories will work with PS5 too, including PSVR, although you do need a PlayStation Camera adapter that Sony is offering to eligible customers for free.

Probably the most important factor of all, both the Xbox Series X and PS5 cost around £450 in the UK, $500 in the US. However, should you not need a disc drive, the PS5 Digital Edition is significantly cheaper as you can see here:

With both costing around the same amount, the main choice could come down to the games and, we have to say, PlayStation 5 slightly edges it in the exclusive title list.

However, owners of Xbox Series X can pay for Xbox Games Pass membership and instantly have access to more than 200 games (albeit mainly Xbox One titles). It’s an intriguing choice between the two for sure.