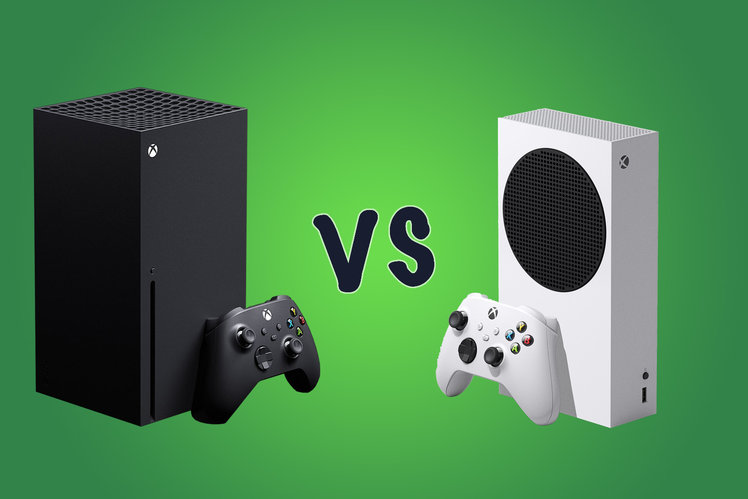 The Xbox Series X is here – but it isn’t the only new Xbox available. The Xbox Series S is an all-digital version with some key differences – and it’s a cheaper alternative. So we’ve put together a handy guide to help you decide which next-gen Xbox is the best for you.

The Xbox Series X is a monolithic beast of a machine, best designed to stand vertically – but it can lay horizontally – and it’s available in black only with some green highlighted openings.

The Series S, meanwhile, looks more like the earlier Xbox One S – it even has a similar grille on the top (when horizontal). Xbox has decided to make that grille black and the console white, however, which makes it look like a loudspeaker when it is stood on its end.

The amount of RAM is also different across machines. The flagship console has 16GB of GDDR6 RAM, while its stablemate has 10GB.

Ray tracing is supported by both, but while the Series X will be able to run games in full Ultra-HD 4K resolution, the Series S will be initially locked at 1440p, and many games will run in 1080p (with 4K plausible later down the line). Both consoles will run games at 60fps natively, although are capable of up to 120fps.

Even with its lower-spec though, the Series S supports variable refresh rates (VRR) and shading.

In terms of storage, both have an SSD for faster load times and the rest of the abilities that solid-state drives (SSD) can offer. The Series X will come with a 1TB internal SSD, plus USB 3 support.

By comparison, the Series S has a 512GB SSD to keep costs down. That’ll give it the same super-fast loading times and other features, but we are a little concerned about the capacity considering most games these days are anywhere up to 100GB in size. Some are even larger, such as Call of Duty: Warzone.

Both consoles have an expansion slot for an additional, proprietary 1TB drive – the Seagate Storage Expansion Card for Xbox Series X/S, as it’s known – which functions like the internal SSD, supporting all those next-gen features and quick resume.

Both consoles will support external USB 3.0 drives (and above) – although they won’t work with the faster loading times of the internal/Storage Expansion Card – for up to as many as three external hard drives.

A new Xbox Wireless Controller ships with the Xbox Series X and the one with the Series S is no different – just a different colour. You can find out more about the new gamepad here: Xbox Series X controller: All you need to know.

It will also be available to buy separately and also works with legacy Xbox One consoles. Xbox has also confirmed that all Xbox One controllers, headsets, and other first and third-party accessories will work with both new consoles too.

All Xbox games – be they Xbox One, Xbox Series, or even original Xbox and Xbox 360 – will work across the entire family of consoles. The only exceptions will be those that require Kinect.

That includes the Series X and Series S, with games featuring enhanced graphics and other platform talents coming under the banner of “Optimised for Xbox Series X/S“.

There is no physical disc drive on the Series S. The Series X (like the existing One X and One S) will sport a 4K Ultra-HD Blu-ray drive for games and movie playback alike.

They will both support HDR, Dolby Vision and Dolby Atmos, for video and games (the first consoles to have Dolby Vision gaming support).

You can also purchase either console on the Xbox All Access monthly payment plan. It includes the console and Xbox Game Pass Ultimate for a low monthly fee. Check out all the details here.

It makes complete sense for Microsoft to launch two consoles, at two price points, much like it has done in the past. However, having reviewed both – the Series X here, the Series S here – our feeling is the X is the real next-gen powerhouse, with the most storage, that will fire on all cylinders when it gets the chance. The Series S, meanwhile, will find its place – but it’s not quite as next-gen if you already own an Xbox One X, say.

It must also be said that with two models of the PlayStation 5 also here – although they’re the same power as one another, just one has a drive and the other doesn’t – it’s an exciting, jam-packed end to the oddest year in recent history.

All that said, no next-gen console is launching with true next-gen games on day one. So if you don’t pick up a console on day one you’ll still be able to get a heap of good titles to play on your existing platform.