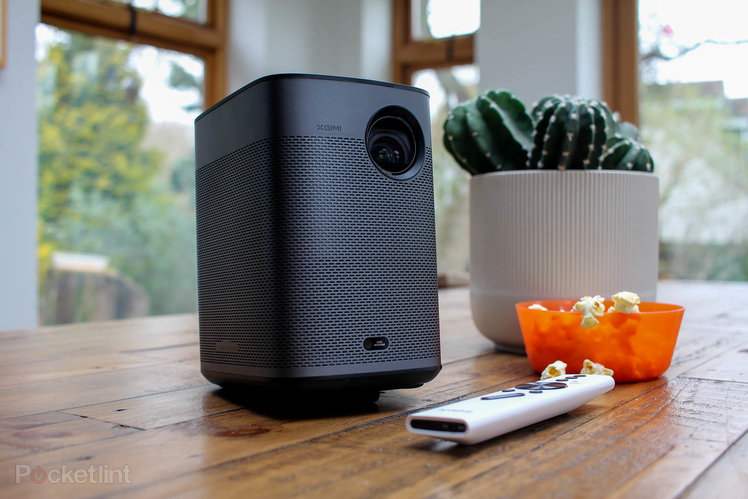 The XGimi Halo+ is a battery-powered portable projector designed to be taken anywhere.

That, in itself, is a lofty aim – and it’s also a little different to the focus of the XGimi Horizon Pro and XGimi Elfin, which are both more concerned with offering a tip-top picture.

In giving you this level of freedom, though, has the company ended up delivering a projector that bites off more than it can chew?

We’ve been testing it over the last few weeks in order to find out – here’s our full verdict on XGimi’s Halo+.

About the size of a Sonos One speaker, this mini projector is essentially the follow up to the 2020 Halo projector. It’s a small, light and very baggable projector, allowing you to easily take it with you on your travels.

Encased in a black mesh case that also doubles as the speaker grille, the projector comes with an integrated kickstand underneath, allowing you to angle the projector without needing to find something to do that for you. There’s also a standard tripod fitting mount screw on the base – as often found on a DSLR camera – if you can’t find a solid surface to perch it on. 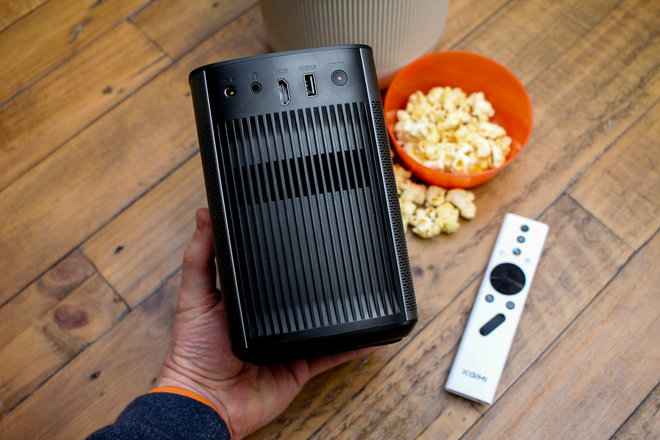 Around the back, there’s the power socket (it comes with a standard charging power brick with a 2.5m cable), HDMI, USB-A, a 3.5mm headphone jack for connecting to more powerful speakers, and a large vent for the fan to keep everything cool. Built-in sound is provided by two very capable 5W Harman Kardon speakers.

There are also three touch-sensitive buttons on the top that allow you to play/pause, as well as control the volume. They are handy to have, though, most of the time, it’s obviously easier to control operation via the comprehensive Bluetooth remote control, included. 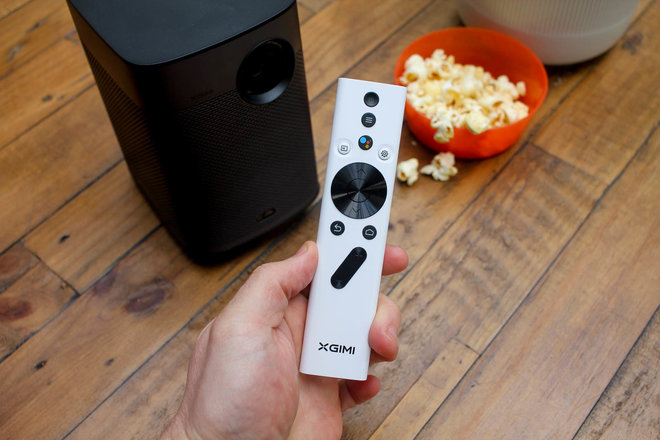 You don’t have to have a line of sight to make this work, handily, and you’ll find all the buttons you need to get going quickly.

The XGimi Halo+ projector is powered by Android TV 10, making things a lot easier to get started.

Like the company’s other Android TV-powered projectors, the Halo+ comes with XGimi’s Auto Focus and Keystone Correction technology.

Their inclusion means setup is quick and easy, delivering a picture that’s in focus and ‘squared’ every time you turn it on – and even if you move it.

It’s a handy feature that not only saves you the hassle of focusing the picture at the start, but also ensures you’ve achieved the best picture you can.

Simply turn the Halo+ on, point it at the wall you want to project on, and the projector does the rest. 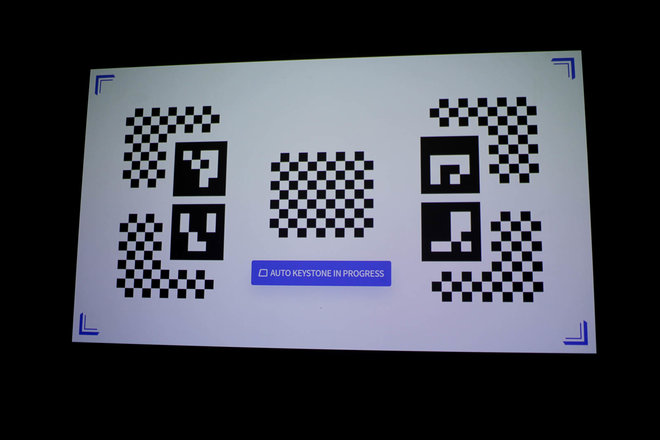 It’s a shame the Halo+ doesn’t come with the company’s screen adaptation technology that avoids obstacles like light switches, but it’s enough to get by for those with big walls. 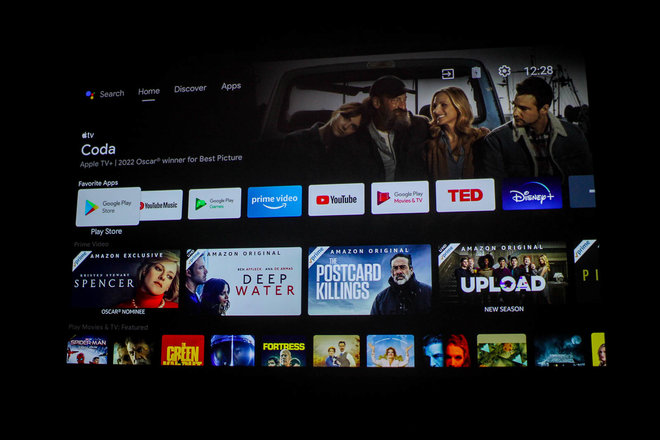 As we’ve griped about previously with XGimi, this list of streaming platforms sadly doesn’t include Netflix. It’s available to download, but Netflix hasn’t certified the projector, so the app doesn’t work. Frustrating.

The simple workaround is to plug in a device that is certified, like the Amazon Fire Stick, Roku Stick, or Apple TV box, but that does require you to carry another device with you, something those looking for that no-fuss approach might bemoan.

Meanwhile, XGimi’s choice of Android TV – and not Android Mobile – means the interface is easier to use and certainly more geared to watching TV and we’ve had no problems navigating through the interface, but also accessing the basic brightness, colour, and HDR settings.

The Halo+ delivers up to 900 lumens brightness and can output Full HD resolution to a screen size up to 200-inches.

The 900 lumens brightness makes it one of the brightest portable projectors in its class and is good enough to watch in a fairly bright room during the day, though you will have to have it connected to the power to achieve that brightness.

If you rely on the in-built 59W battery, the brightness drops down to 700 lumens. It’s noticeable when side by side, but still delivers a great, and, importantly, bright picture.

Whether you’re experiencing the Halo+ with 900 or 700 lumens output, we aren’t suggesting this is enough to handle full-sun brightness, but it’s certainly enough to not have to worry about closing all the curtains to make something watchable. That’s not something we expected, as well, so it’s a pleasant surprise. 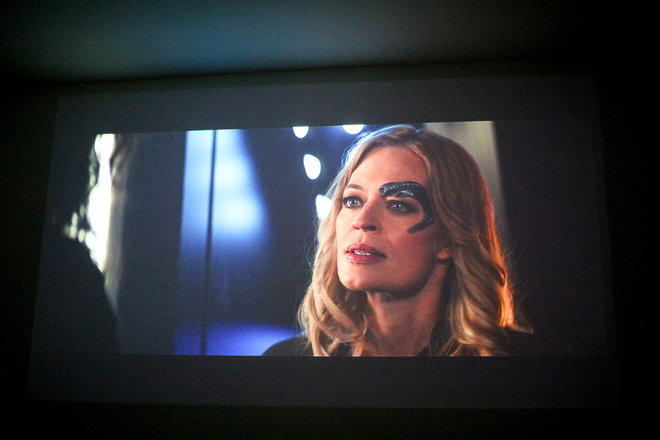 Of course, it’s not the way to achieve the projector’s best picture, but it’s certainly doable and should help make the Halo+ more versatile than you would expect.

We watched a range of movies and shows – from Star Trek Picard and Avengers: Infinite War all the way to Spencer and Coda – and were more than happy with the results. Skin tones are good, motion is clean and colours closely match what you would expect.

It’s not 4K, but the HDR10+ does help by delivering that high dynamic range to the experience, which, in turn, makes things look a lot better. Turn it off, though, and you can certainly see the difference in the colour reproduction.

And as for the battery life? We’ve found the Halo+ projector delivers around 2 hours from our tests. That’s enough to watch your average movie or a couple of episodes of your favourite shows, but certainly not enough to get stuck into a 3-hour epic. It might be portable, but for longer movie watching sessions you’ll still need the projector plugged in, and by doing so you get a brighter picture too. 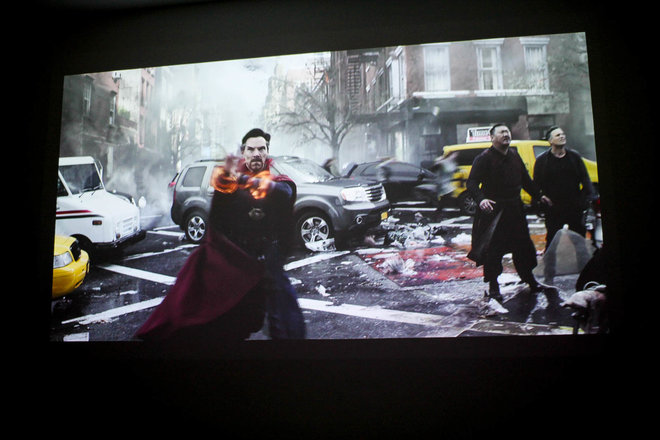 Frustratingly, there are two off modes: hibernate, which continues to use the battery until it’s depleted, and a complete ‘off’.

As you can imagine, we experienced a couple of occasions during testing where we’d opted for the hibernate mode by mistake (a short press of the power button rather than a long press) and were met with a completely dead battery upon return. It’s something to bear in mind if you do plan to travel without the cable.