Smartphone manufacturers rely on custom Android skins to offer a tailored experience to their users. While there’s a variety of Android overlays – thanks to the customizable nature of Android – there are a few that most users can recall off the top of their heads. Xiaomi’s MIUI is definitely one of them and is among the most popular and widely used Android skins in the world – thanks to the brand’s value-for-money offerings in all price brackets and extreme customization which makes it stand out from among the rest. Today, Xiaomi released the latest version of its Android-based operating system globally as MIUI 12.

Users of Xiaomi, Redmi, and POCO-branded devices have been anticipating this latest release as the company puts a stronger focus on privacy and security features. As users begin to receive the latest update, they will also notice new UI elements and intricate system animations. In addition to the visual changes, MIUI 12 gets a host of features aimed at improving the privacy and security of the devices.
We got a chance to use the pre-release build of MIUI 12 global beta and discovered the following new features which have been added to Xiaomi’s Android interface.

The MIUI 12 interface strikes a balance between aesthetics and vital information portrayed in a visually gripping manner. MIUI 12 gets several new interactive and visually detailed elements to offer a gripping and exciting experience. Since these changes are most likely to grab your attention, we’ll start with the UI and UX changes in MIUI followed by the under-the-hood improvements that the latest version of Xiaomi’s Android skin comes with.

As we mentioned above, MIUI 12 gets a horde of new and striking changes in terms of appearance. The most evident ones of these include the new radially curved elements, the new animations, the new “Control center,” vivid 3D stats, and much improved dark mode. We take brief notes at each of these new features in the following sections.

With MIUI 12, Xiaomi is emphasizing a lot on the design by focussing on small details that make for a premium experience. With the new interface, Xiaomi has made some changes at the system level for adding real-time gaussian blur effect. With a new physics and rendering engine in MIUI 12, UI elements change engagingly with each touch interaction.

The new visuals and animations in MIUI 12, as per Xiaomi, are inspired by nature. There is a variety of new animation ranging from the launching or closing of apps to switching apps using the bottom navigation bar. Xiaomi’s physics engine renders these animations with 3D trajectories utilizing G2 curvature that simulates real-life motion. Xiaomi is also adding subtle movements to the app icons to make the user experience more stimulating.

The Control center features a grid of quick setting shortcuts with the most important ones such as Bluetooth, Wi-Fi, and mobile data shown in the form of rounded rectangular buttons with a tiny arrow in the bottom corner which can be used to show available Wi-Fi connections or Bluetooth devices on an overlay card. Another nifty addition is the new slider for brightness which is now placed in the center of the control center and is relatively more easily accessible than before, especially on phones with big displays. The Control center can be expanded by a downward swipe on the bar below the brightness slider and icons can be arranged manually based on your preferences.

All of these buttons in the Control center are animated and some, including the dark mode or the flashlight toggles, also change color when you tap on them. Users who prefer the MIUI 11-style quick settings panel will be able to turn off the Control center from Display settings.

There’s a key emphasis on visualizing data so it’s not just random and dull numbers that only attract geeks. Xiaomi has added animated visual elements to highlight the storage, utilization of storage, battery capacity, and the usage of battery. These visual elements make data engaging for the average users and not restricting these stats to the pro-users.

Besides considerable uptake of color-coding, these elements are also interactive – for instance, you can drag your finger over the battery consumption graph to see hourly battery usage or over the 3D stacked bar graph for the storage to see the categorization of file types stored on the device.

The new enhanced dark mode on MIUI 12 features a darker color palette for system backgrounds, system apps, and third-party apps alike. This is an essential feature for those times when you find yourself using your phone at night or right before sleep. While the dark mode is much easier on your eyes, it also reduces battery consumption, especially on devices that feature AMOLED display.

Although dark mode was added to MIUI with the previous version – i.e. MIUI 11, the improved dark mode can also be applied selectively per app and even forced on apps that do not support the solid black true dark mode – like WhatsApp. Besides, the stock nature-inspired wallpapers in MIUI 12 can also adjust to a darker shade when you apply the dark mode feature.

With MIUI 12, Xiaomi adds an interesting perspective to wallpapers. Since the UI is inspired by nature and the living elements of the universe, MIUI 12 also comes with a new set of live wallpapers – called Super Wallpapers – with multiple levels of aerial views above the Earth as well as Mars. When the screen is locked, the planets are visible from how they would appear in the distant space. When you tap on the display to activate it, you see a nearer view – perceivably from the planet’s orbit. And, when the phone is finally unlocked, a swift animation teleports you to vantage point right above the planet in a jiffy. Our verbal description may fall short of how good this feature is, so here’s an example of how MIUI’s Super Wallpapers work:

Besides the visual changes added in MIUI 12, there are a few functional improvements that enhance the overall user experience. New features added to MIUI 12 include floating windows, a new launcher with an app drawer, and a refined Ultra battery saver mode. In addition to these, MIUI 12 also gets a new and versatile casting feature that allows users to mirror their smartphone’s screen for official presentations or telecasting games or media to a larger display.

Floating windows are supported in almost all of Xiaomi’s system apps as well as in a variety of third-party apps including Netflix, TikTok, Facebook, etc. You can either long-press on the app preview in the Recents menu or tap on the “Floating windows” option on the top left on the page. You can also pin up to 10 of your favorites apps to quickly access them from this menu.

Xiaomi’s newly introduced app launcher is one of the highlights of MIUI 12, especially for long-time Android users. Xiaomi started evaluating an app drawer in the MIUI global builds last year but now the feature comes integrated within the system. The newest addition to this launcher is an app drawer with highly useful organization tools that automatically sort apps according to the category. Besides this, you can also choose between a light and dark background for the launcher and vary the transparency of the background.

The launcher is similar to the POCO Launcher, which is also available for download from the Google Play Store and comes with certain additional features like an app vault and support for organizing icons based on color. The feature may not be active by default but can be Home Screen setting in MIUI 12. Users who prefer the traditional home screen without an app drawer can continue using that instead.

Ultra Battery Saver is a new mode that will help users get more battery life out of their Xiaomi, Redmi, or POCO phones. When your phone’s battery starts running low, MIUI 12’s Ultra Battery Saver can be turned on to suspend the most battery-intensive processes while the system prioritizes more essential features. Calls, messages, and network connectivity remain fully useable in ultra battery saver mode.

You can choose up to six other apps besides Messages, Phone, and Contacts that you can use in the Ultra Battery Saver mode. Meanwhile, the background and the overall system theme is turned to a dark theme to conserve battery.

While stock Android has a built-in system for casting, it doesn’t provide many features aside from basic screen mirroring. MIUI 12 improves upon stock Android’s casting feature with some new abilities that make presentations much easier and more presentable while controlling them right from your phone. You can now cast your phone’s display to an external screen wirelessly in MIUI 12. The interface allows casting documents, apps, videos, or even games. The casting feature can be accessed from the share sheets within documents, photos, and videos, or from the drop-down Game Turbo menu in supported games.

The casting feature also complements MIUI 12’s new floating window feature, allowing you to cast a specific screen and then minimize that screen to start interacting with other apps without disrupting your presentation. Any incoming calls or notifications will be hidden from the cast on the external display.

If you have a particularly long presentation or using the feature to cast a long video, you can continue to cast while your screen is off, saving battery life. None of these features require an internet connection but may use Wi-Fi or Bluetooth to connect to the larger screen.

MIUI 12 brings many new security features, making it a great solution for privacy-conscious users. Like we mentioned above, Xiaomi is not simply adding these new privacy features but also taking the effort of making them visually attractive. Besides making the privacy-related information easy to consume, MIUI 12 also makes this information easy to consume by simplifying how privacy-related permissions are grouped. As compared to stock Android, the information is present much more refreshing, illustrative, and intriguing.

MIUI 12 offers a comprehensive overview of the permission being used by different apps by using clear text and description under each permission. Compared to stock Android, the privacy data represented in MIUI 12 is easier to understand and less intimidating to the users. In addition, MIUI 12 also allows users to control permissions for actions like the state of NFC connection and the ability of apps to show permanent notifications or as pop-up windows.

Besides the visual revamp of how MIUI 12 portrays information about privacy, it has also added easily noticeable alerts and controls that form an extra layer of protection and create awareness over stock Android as well as other Android skins.

Malicious apps rely on stealth to gather this information. Xiaomi has introduced the Background permission notifications features in MIUI 12 and it alerts you whenever an app begins using your location services, microphone, or camera. The new Background permission notifications system removes the risk of spyware or any other malware by showing you colored icons in the status bar.

MIUI 12 has other options to protect your private information when you’re sharing media. For instance, you can choose to share an image without the EXIF data that is generally attached to that photo and often contains time, location, and metadata information which can be used to trace you if uploaded anywhere online. This new feature in MIUI prevents information to be shared with anyone else who has a copy of this image.

When will my phone receive the MIUI 12 update?

Xiaomi users will start receiving the new MIUI 12 update starting in June 2020. If you have one of the following phones you’ll be first in line to receive the update: 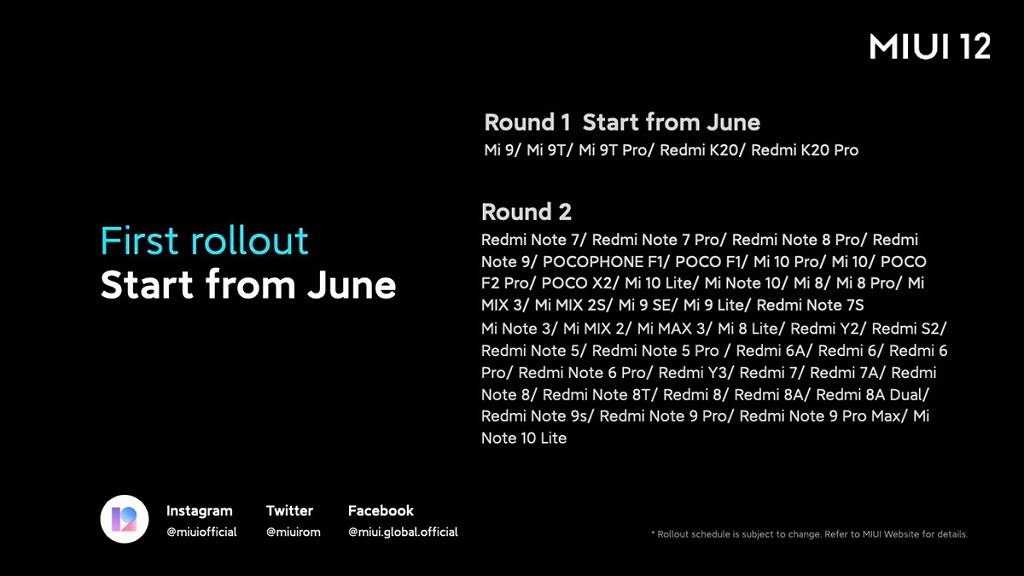 We will continue to deliver more news about MIUI 12 updates as they make way to Xiaomi, Redmi, and POCO phones around the world.

You can also check out XDA’s early hands-on with MIUI 12.