It’s only been a couple of weeks since Qualcomm first announced its new “premium” range SoC for 2021: the new Snapdragon 780G. The chip is a successor to the Snapdragon 765 which ended up being a quite successful and popular chip among 2020 mid-range and “premium” segment devices, powering many devices such as for example the Pixel 5 and 4a 5G.

Also a couple of weeks ago, Xiaomi had made a flurry of device announcements among the Mi 11 Ultra as the new mega-flagship device for 2021. One device we didn’t have time to cover was the new Mi 11 Lite 5G. Beyond the super interesting form-factor of a 6.8mm thick device and weighing in only 159g despite its larger 160.5 x 75.5mm footprint, as well as higher quality OLED display, the phone differentiated itself by being the very first Snapdragon 780G phone in the market.

We’ve got our hands on a review sample, and wanted to dedicate a piece focusing a bit more on the SoC, as the new chip will be powering not only the Mi 11 Lite 5G, but undoubtedly a whole lot of other mid-range and premium devices in the coming months.

On paper, the new Snapdragon 780G is a major upgrade from the Snapdragon 765G. The new SoC features not only upgraded CPU microarchitectures, actually jumping from a Cortex-A76 generation to a newer Cortex-A78 generation, but also shifts from a 1+1+4 core setup to a 1+3+4 setup, meaning the new SoC has double the amount of performance CPU cores. The clock frequency remains at a peak 2.4GHz for the fastest core in the configuration.

This setup is quite interesting as it’s quite similar to the middle CPU cores of the Snapdragon 888 flagship SoC, which employs the same microarchitecture at roughly the same clocks, and both chips are manufactured on Samsung’s 5nm 5LPE process node. There are differences in the memory setup as the Snapdragon 780G remains on a LPDDR4X interface that’s only 2x16b wide, which is smaller than the LPDDR5 4x16b bus that the flagship SoC gets. There’s also differences in caches such as the L3 cache being much smaller.

Comparing the performance and power efficiency of the new chip compared to not only its predecessor, but also its current generation flagship sibling, we should be able to paint a better picture of how the new chip sits in the competitive landscape. 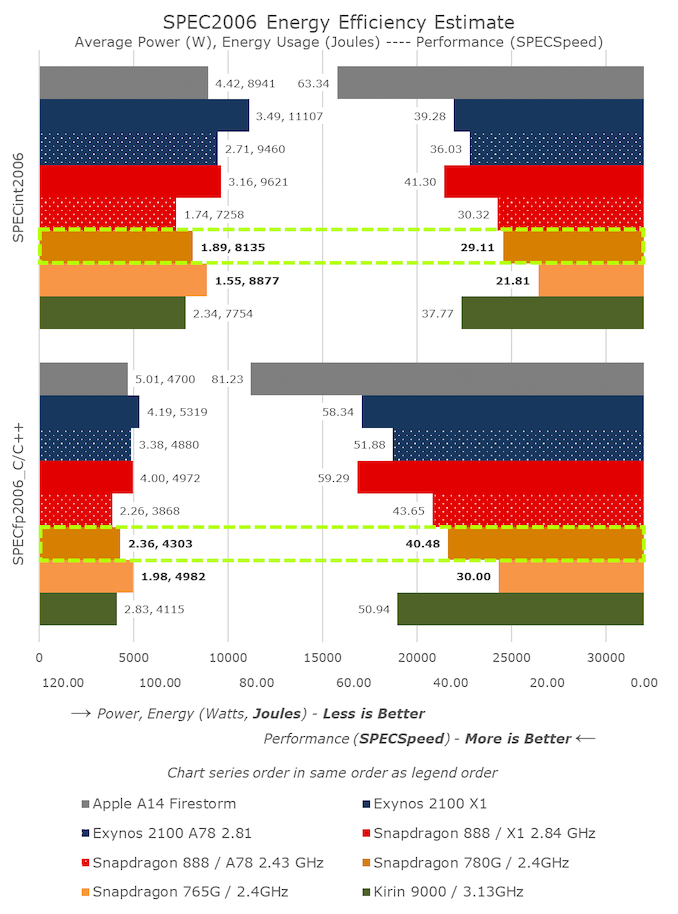 In SPEC2006, the new chip – albeit running at the same frequency as the Snapdragon 765G, is showcasing significant performance leaps compared to its predecessor. We’re seeing roughly +34% performance improvements in both integer and floating point test suites, not quite 40% as Qualcomm had proclaimed, but that’s also an “up to” figure depending on the workload.

In terms of power and energy efficiency, it’s an interesting situation. In terms of power usage, we see that the performance increases did come with a cost, as the new chip is roughly +20% more power hungry as its predecessor in single-threaded tasks. Due to the performance increase being higher than the power increase however, the energy efficiency of the new chip is actually higher than its predecessor, showcasing 8 to 13% less energy usage to complete a task, which should have direct effects on the battery life of devices.

In general, the larger performance increase combined with a reduction in energy usage of the new SoC means that it’s a pretty significant generational leap against the Snapdragon 765.

A bit unrelated to the Snapdragon 780, last month Google had finally pushed AArch64 versions of Chrome and the system WebView packages, signifying an important shift away from AArch32 32-bit era. This actually has a larger impact on benchmarks as newer Arm Cortex microarchitectures have more significant differences (relative to past ones) between the two execution modes, with the AArch64 mode being more performant and more efficient. For this reason, we’re starting with a new clean slate of test results with explicitly stated (64b) in the graphs. 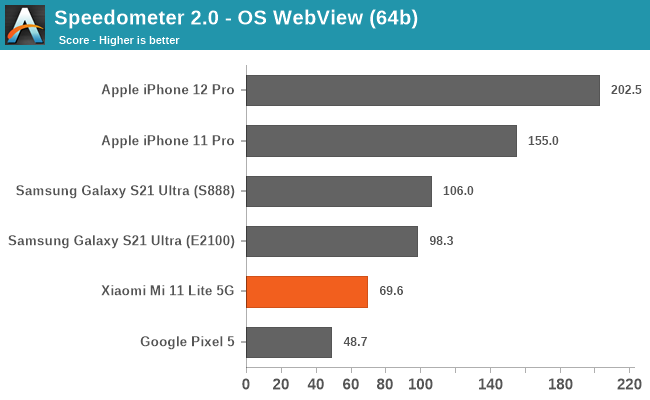 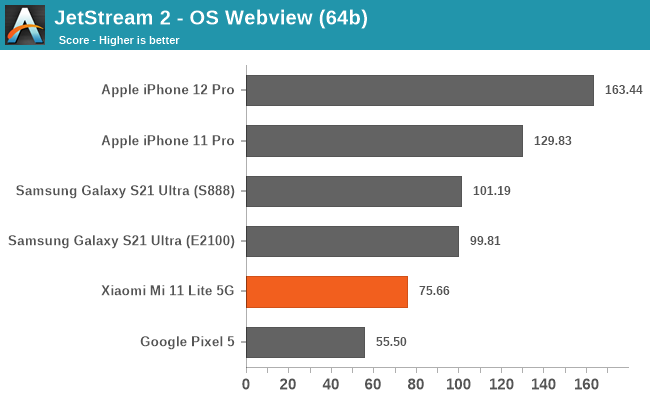 We’re comparing the Mi 11 Lite 5G to the Pixel 5 here as the Mi 10 Lite 5G with the Snapdragon 765G unfortunately is still being deployed 32-bit packages due to its lower 6GB RAM, and we still want an apples-to-apples comparison.

In the JetStream 2 and Speedometer 2.0 browser benchmarks we’re seeing +36-43% performance increases compared to the Snapdragon 765G, which are significant boosts. The Snapdragon 780G still clearly lags behind the performance of the flagship SoCs, signifying that there’s still plenty of performance differentiation to be had between the segments.

In general, the performance leap of the Snapdragon 780G is quite significant. The new CPU microarchitecture delivers large generational IPC boosts and the fact that the new chip has double the big performance cores also helps out multi-threaded workloads a lot.

Truth be told, it’s a vast shift in user experience as the device definitely feels much faster and snappier than Snapdragon 765G devices. It roughly lands in between the Snapdragon 855 and Snapdragon 865 flagship generations in terms of overall device experience, which is not surprising as that’s also exactly where the new chip benchmarks itself at.