It is always nice to have some music accompany you while you enjoy some “me-time”. Tuning in to your playlist while you read, or write, or do your laundry, especially over a wireless speaker is an unparalleled joy. In a corner of my room, it is a Sony SRS XB32 wireless speaker that is usually tasked with the duties of keeping me pumped up. For the last 10 days though, Xiaomi’s latest Mi Portable Bluetooth Speaker 16W is sitting in that spot.

It resembles my Sony SRS XB32 party speaker a lot, especially with its big-speaker design and a promising spec sheet. Moreover, a price of Rs 2,499 makes it an interesting deal for people like us who love to have a good audio system in the house. Xiaomi sells the Mi Bluetooth Speaker 16W in two colour variants as well. It all seems like a deal that raises my eyebrows.

But is it? Well, here’s my account of using the Mi Portable Bluetooth Speaker 16W.

The Sony SRS XB32 speaker I have was an expensive speaker (at Rs 12,000) when I bought it in 2019. It feels well-built and designed to take some abuse, if I am in the mood to go outdoors. The Mi Portable Bluetooth Speaker 16W feels no different in comparison, despite just costing a fraction of the Sony’s price. It’s as big as the Sony speaker and even gets a similar build quality that exemplifies quality. 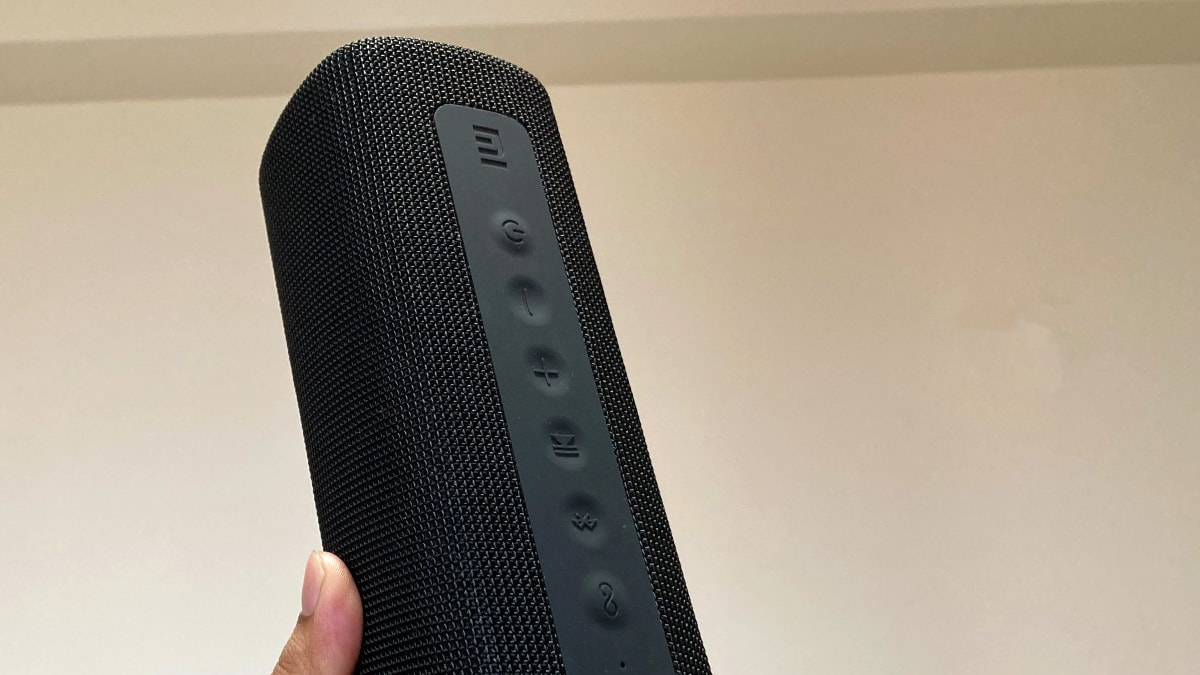 The design is reminiscent of JBL Flip 4, with a fabric mesh covering almost the entirety of the speaker. The flat sides have plastic surfaces, one which houses the two ports, i.e., a USB-C port and an AUX port. The control buttons are stuck to the top under a rubber surface and there are many buttons to play with.

You get your standard play/pause and the volume keys, along with a dedicated power key, a TWS pairing mode key, and a regular Bluetooth pairing key. There’s also a microphone, which comes in handy if you take calls on your speaker. A lanyard cable is attached to one of the ends and that surely helps while carrying it around, or tying it to hook. 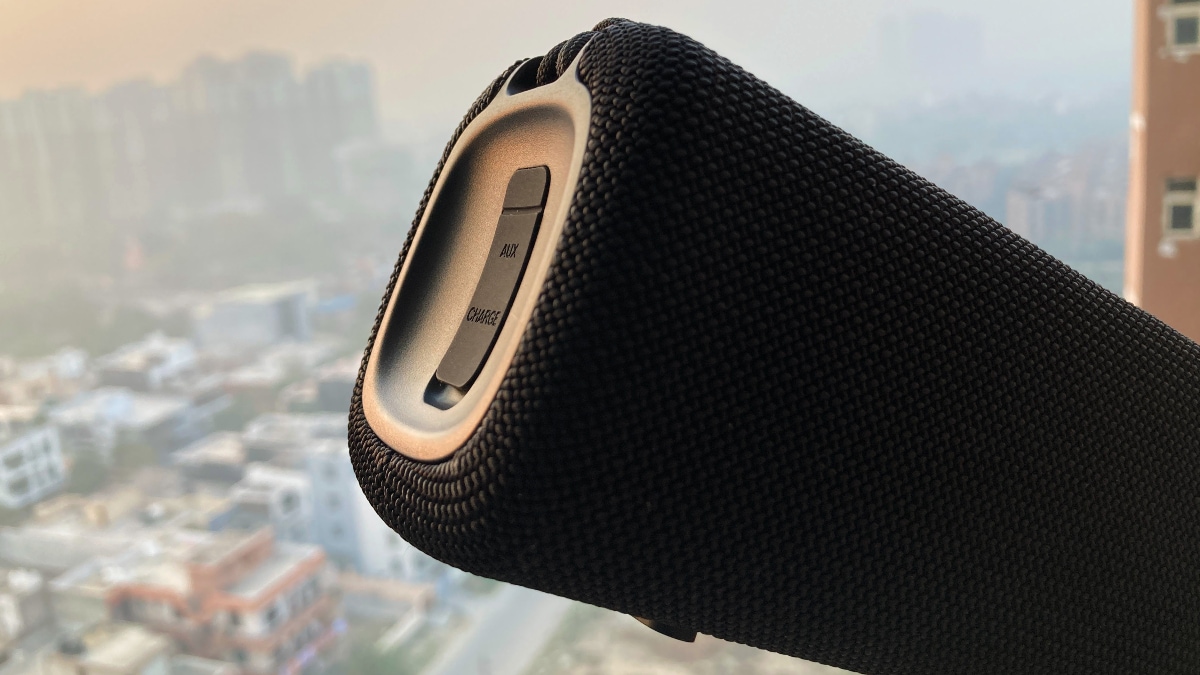 Xiaomi says the speaker is IPX7 certified, which means it can survive pool parties as well as rains. The black colour variant that I have is stealthy but those seeking a flashy option could consider the blue colour variant. I wish Xiaomi had included some LED strips or tiny strobe lights on the Mi Portable Bluetooth Speaker 16W to help disburse a party mood. Then again, I am asking too much from a dual-driver speaker that costs just Rs 2,499.

At 790 grams, you will notice the weight, but not so much while carrying it in a backpack. The two rubber grips on the opposite side of the control panel help it stay put horizontally on a surface. You can also keep it vertically standing on its side, with no discernable side-effect on the audio output.

The Mi Portable Bluetooth Speaker 16W’s highlight is its dual-driver speaker setup. It has got two 8W speakers along with a passive bass radiator to deal with whatever you throw at it. Xiaomi also offers a Dual EQ mode to let you choose between a balanced mode and a bass-focused mode. How does all that end up sounding? 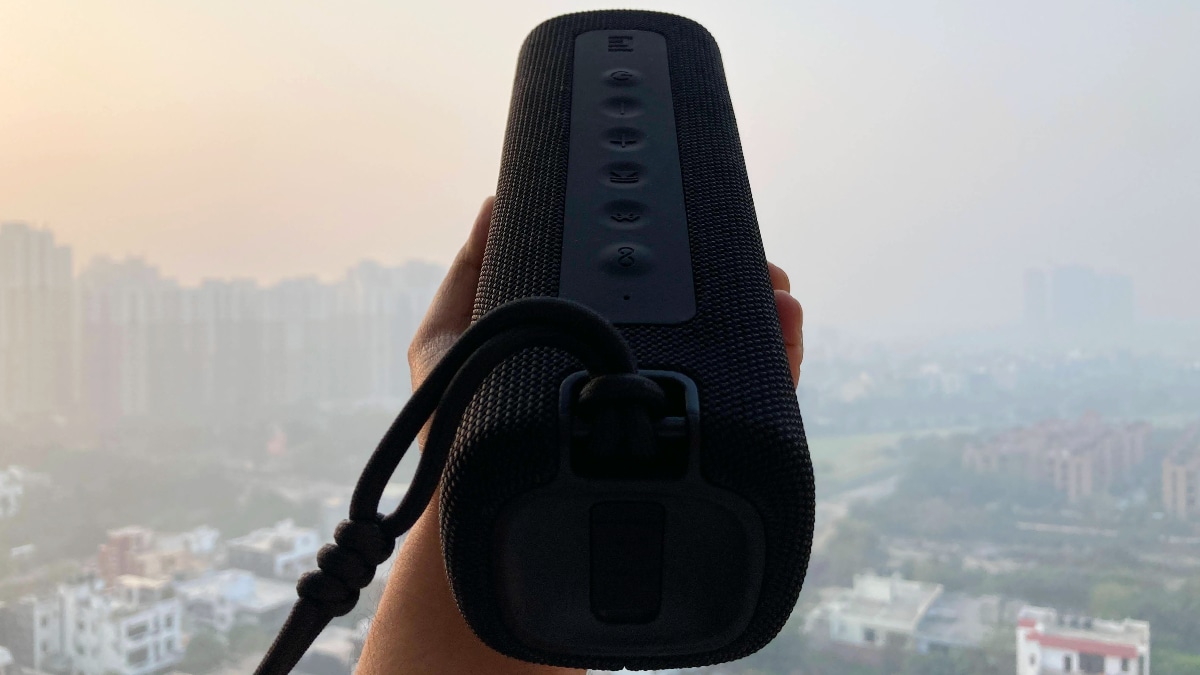 Pretty good, to be precise. I have seldom seen dual-driver wireless speakers under Rs 5,000 having an inclination towards an open soundstage instead of being focused entirely on bass. The Mi Portable Bluetooth Speaker 16W has an audio signature that feels open, with equal emphasis on the mids, highs and lows. Whether I tune to Honey Singh’s “First Kiss” or “Blinding Lights” by the “The Weeknd”, the Mi Portable Bluetooth Speaker 16W holds on to its intentions of keeping it all balanced. “Nazar na Lag Jaye” by Ash King from Stree maintains its instrumentals well without compromising the vocals. I find no noticeable distortion in the vocals as well as the high-pitched instruments. The mids and lows have a little inclination to amplify, but not enough to make it muddy. The stereo effect is well imparted too.

That said, I wish Xiaomi had worked out a way to include more bass with the Mi Portable Bluetooth Speaker 16W. The Dual EQ mode seems like a gimmick. Switching to the bass mode offers no noticeable difference in the audio output, at least to my ears – it lacks the “oomph” you get with a traditional portable party speaker. Xiaomi shared a graph of the audio output where it proves the bass enhancement, but I could figure it working ever so slightly in some Bollywood tracks from the 90s. 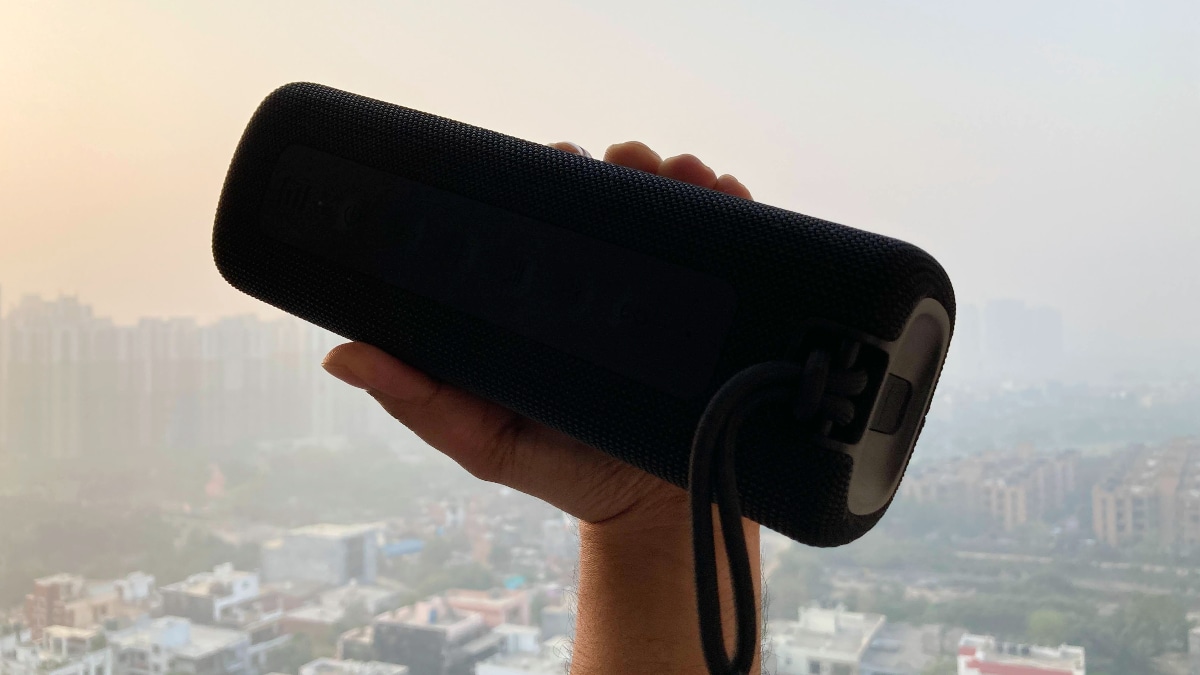 The Mi Portable Bluetooth Speaker 16W gets plenty loud to keep the hyperactive kids engaged (instead of messing around with cupboard items). I do notice shrillness at times in volume levels above 70 percent.

I also take calls on the speaker frequently and I didn’t find the performance any different from other wireless speakers in this price range. You have to stay closer to the speaker in order to keep your voice clear and loud to your caller. As spring is approaching, talking on it in a room with a ceiling fan isn’t a good idea, as my callers kept complaining of ambient noise.

The Mi Portable Bluetooth Speaker 16W relies on Bluetooth 5.0 for connectivity and it makes for reliable connections within a 1200 sqaure-feet two-bedroom apartment. The speaker didn’t let go of the connection or distort the audio output, even when I took it to another room. I used the AUX connectivity option while playing games on my laptop and the audio quality remained unaffected. 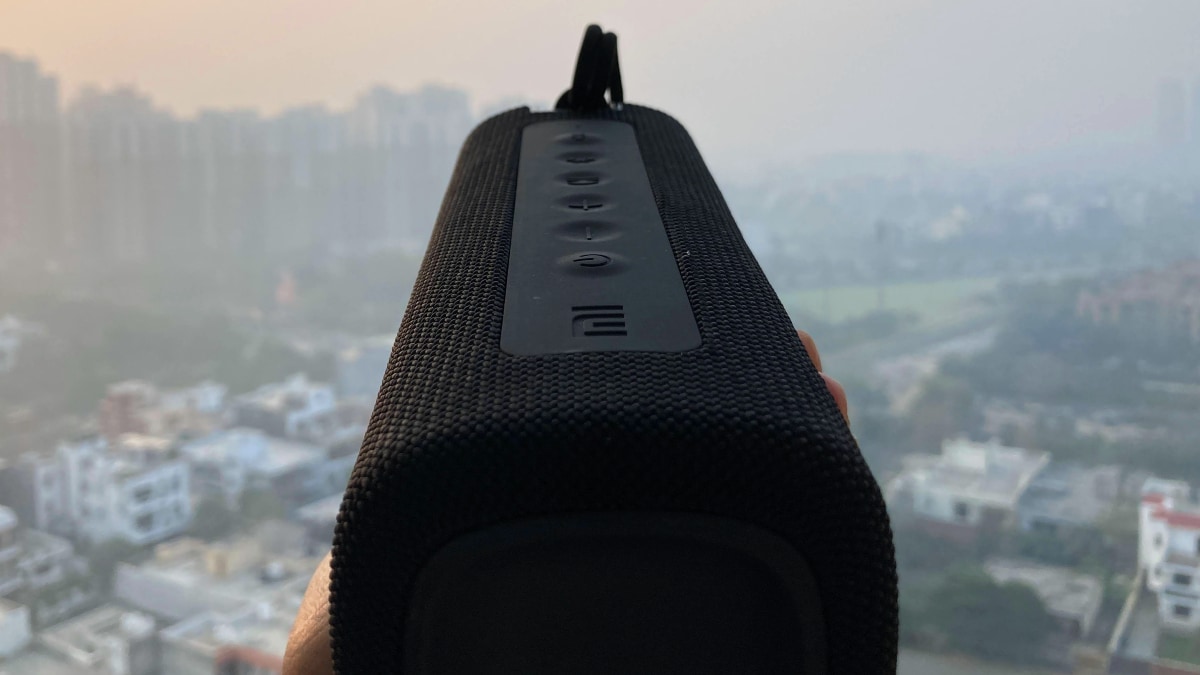 With the 2600mAh battery, Xiaomi promises up to 13 hours of battery life at 50 percent volume. I use my speaker for two hours (approximately) daily with the volume mostly set between 30 percent and 50 percent. In this scenario, I had to charge the speaker after 8 days. Not bad for a dual-driver speaker.

However, it does take ages to recharge the battery from nothing. If you are looking for a number, how does four hours of waiting sound to you? Thankfully, there’s a USB-C port to refill the battery, which means you don’t have to carry a separate cable to charge it up. 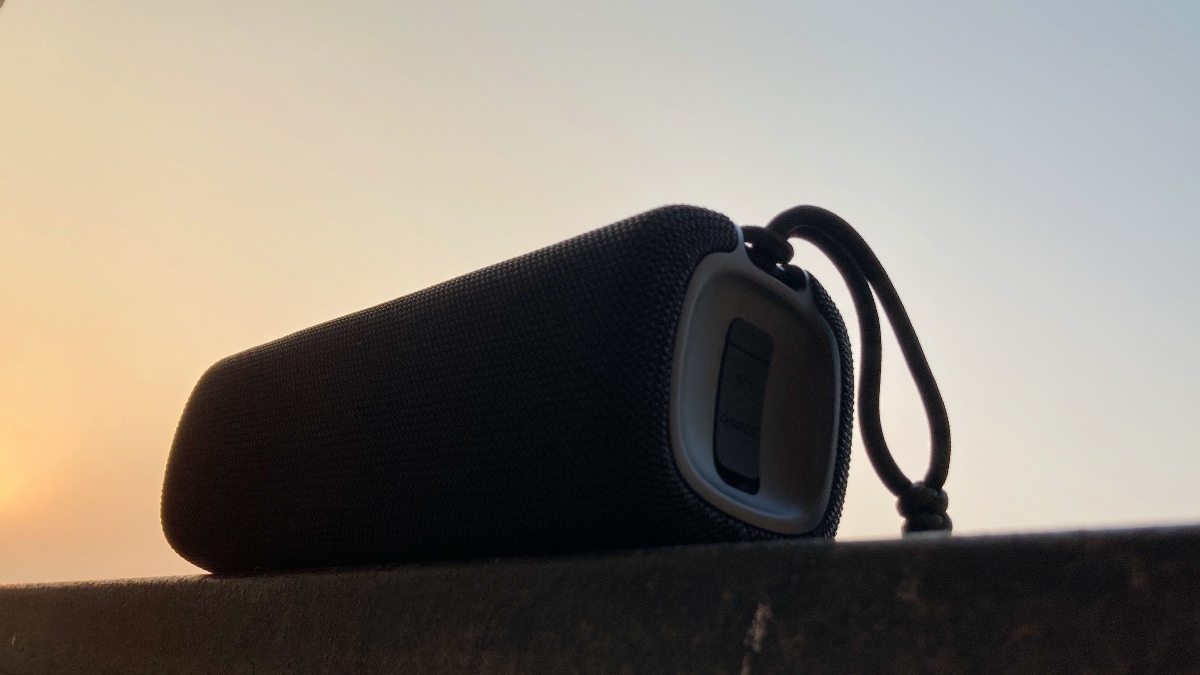 At Rs 2,499, there are so many things to like about the Mi Portable Bluetooth Speaker 16W. The overall audio quality is good, with a unique preference to incline towards a balanced sound profile. I can say the same for the battery life. The build quality is up to the usual lofty standards set by Xiaomi itself. Compared to a bunch of Bluetooth speakers under Rs 5,000 (that I have heard), this Xiaomi speaker is right there with the top choices.

However, do note that the bass performance isn’t up to the mark if you are willing to use this as a party speaker. The Dual-EQ mode seems like a gimmick. I may be nitpicking but nobody would mind having some LED party lights, even in small traces, on the speaker.

To sum it up, the Mi Portable Bluetooth Speaker 16W makes a strong case for itself as your travel-cum-table speaker, especially at the price it sells. Unless you prefer a more portable single-driver wireless speaker, this earns our recommendation for a wireless speaker under Rs 3,000.