The Smart Speaker IR Control is Xiaomi’s latest audio product, at least in the Indian market. It’s a modestly priced device for its category with one interesting new feature; it lets you control devices around your house with just your voice, as long as they work with an IR remote. 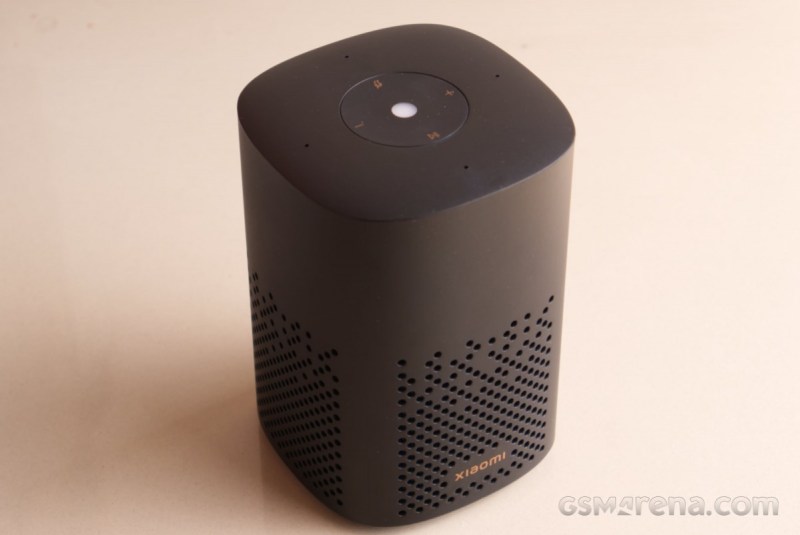 The Xiaomi Smart Speaker is a relatively compact device, measuring 14cm tall and 9.5cm across. It is made out of matte black plastic that does unfortunately show dust quite readily and requires regular cleaning.

On the front is a four character seven-segment LED display that mostly just serves as the clock. The display is cleverly hidden when not lit. As it shines through the plastic body, the light does get diffused a bit. It’s still usually easily visible but can be hard to see if there’s a lot of direct light reflecting off the front surface. 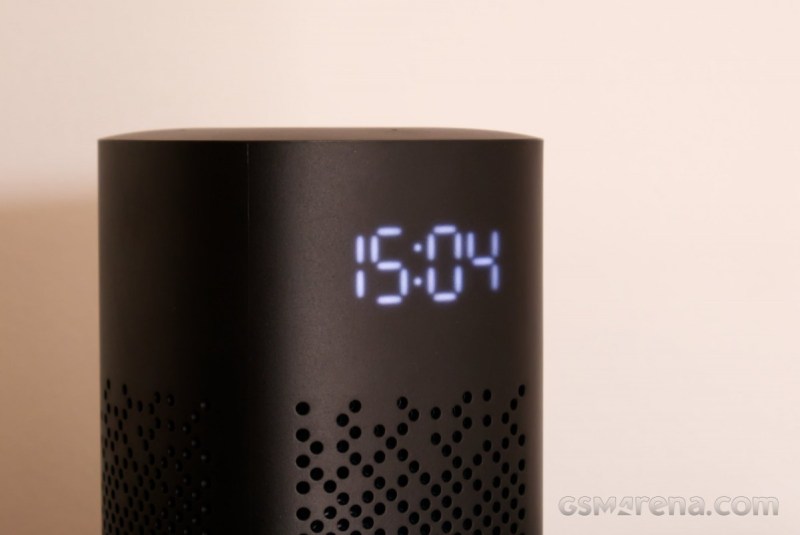 Below the display is the grille for the single down-firing speaker. The grille goes all around the device as the sound comes out from all sides. On the back is the port for the power cable. The device requires constant power connection and does not have a battery.

On the top are controls for adjusting the volume, play/pause, and muting the microphone. In the center is an LED that glows when you are talking to the speaker and while it processes your requests. It turns orange when the mic is muted and stays that way until it is unmuted. The light can be distractingly bright at night. Around the controls are the far-field microphones. 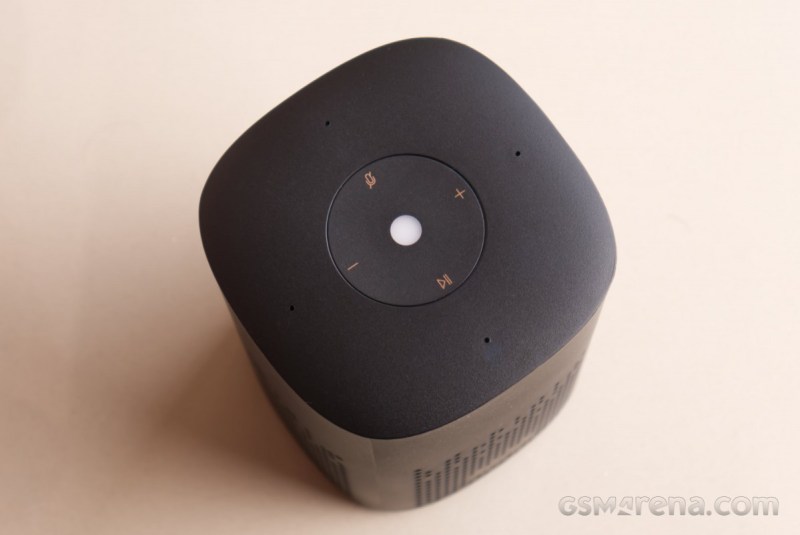 The build quality, fit and finish are good enough for a product in this price class. It’s not something you physically interact with a lot so it doesn’t really matter much. The design is plain but not unattractive; it looks kind of like a mini Mi Air Purifier. As mentioned before, it does require regular cleaning to not look dirty. A white option would be nice but not being offered.

The Xiaomi Smart Speaker requires setting up through two different apps. First, you need to set it up using the Google Home app. Once that is done, you will need to do further setting up through the Mi Home app. You can uninstall both apps afterwards as the device does not depend on them for regular smart speaker functionality but they do have some useful features to keep them around.

The Google Home app lets you do things like adjusting the sound quality, activate Voice Match for different members of the house, volume levels for alarms and timers, accessibility features, and more. The Mi Home app lets you change the home automation settings and configure the IR control feature.

With this feature, you can set up the device to control objects around the room that work using IR remote controls. You first need to find the device you are trying to control through the list of supported ones. It can be a TV, set-top box, air conditioner, fan, media player, or projector (called lamp for some reason in the app).

Once you configure it (works the same as setting up a universal remote), you can then just use voice commands to control simple tasks like turning the device on or off or changing the channel or the volume. It’s a neat feature and works well, provided both the Xiaomi Smart Speaker and the device being controller are in the same room and within line of sight.

Aside from that, the Xiaomi Smart Speaker behaves like any other Google smart speaker, with full support for Google Assistant features as well as Chromecast integration. There’s also Bluetooth support, if you would rather just send audio over Bluetooth.

The Xiaomi Smart Speaker has okay audio quality, provided you tune it a little bit.

Out of the box, the audio is biased towards the upper-bass and the mid-range frequencies. The bass lacks low-end intensity as one would expect from a small 1.5-inch driver and it’s mostly just the mid-bass and upper-bass sounds that tend to come through, albeit a bit meekly.

The mid-range is mostly what you will be hearing, as there is decent coverage and timbre for vocal sounds. The sound does, however, drop off as it goes from upper-mids into the treble range.

One of the big downsides of down-firing speakers is that upper frequencies get blunted after being fired straight down. There is an inverted cone to diffuse the sound in every direction but higher frequencies tend to be very directional and lose their impact if not fired directly at the listener.

To compensate for this lack of top-end performance, you have to make judicious use of the treble control within the Google Home EQ settings. I had to get it fairly close to maxing it out to get some treble energy back into the mix and even then it sounds like only a small part of the treble range was being boosted. Still, it does make a positive impact overall and it would have been nice if the speaker just shipped with this preset pre-applied.

Once set up properly, the sound is good enough for a small room. You do get some bass energy every now and then, the vocals have good tonality, and the treble is adequately bright if somewhat uneven. For the indiscriminate user, it may even pass off as good sound quality.

Microphone performance was also adequate. The issues I faced were mostly with Google Assistant being a klutz rather than any issue with the device itself. The speaker does gradually lose its ability to hear you as the volume level goes up but you can still speak normally till 50% volume and have it hear you. And 50% is still reasonably loud for a small to moderate sized room.

The Xiaomi Smart Speaker IR Control is priced at INR 5999 ($75), although it is usually on sale for INR 4999 ($62). For that price, it competes against the Google Home Mini and the Echo Dot. It definitely sounds better than both of them even if it doesn’t look as nice. Amazon does, however, have the Echo Show 5 for just a little bit more and it has a full 5.5-inch touchscreen, which adds a lot of value.

None of these other devices can do the IR control trick that the Xiaomi speaker can so if you want something that can do that or just a smart speaker for pure audio use then the Xiaomi Smart Speaker is a fine choice in that price range. Otherwise, the Echo Show 5 is the better option for a little extra.