Xiaomi has a bunch of influential smartphones in its product cycle, and one of these is the Redmi K series. The K-series occupies the mid-range segments, boasting of value mid-ranges and affordable flagships over the past few years. While the K-series branding has recently been restricted to China, the underlying phones do get rebranded releases globally and in other key markets like India. Xiaomi has begun teasing the Redmi K50 series in China, and one of the first reveals is the inclusion of 120W fast charging. 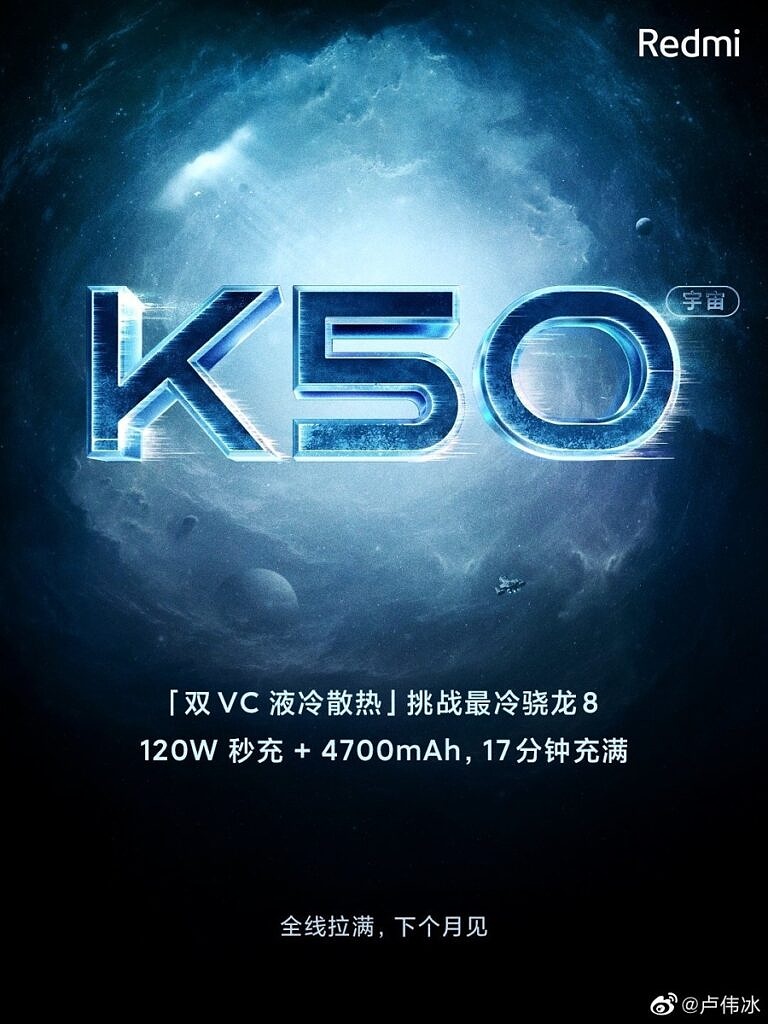 Redmi’s official handles on Weibo have posted the above teaser for the K50 series. The teaser mentions that the K50 series will have a “Dual Vapor Chamber” heat dissipation setup, making it one of the coolest thermal management setups for the Snapdragon 8 Gen 1. There have been widespread complaints on the overall heat ceiling on last year’s Snapdragon 888, as the SoC, in general, has been noticed to run fairly hot without getting thermally throttled. Expectations are consequently high for Snapdragon 8 Gen 1 devices for their heat management, and Redmi is exuding great confidence in its cooling system for the K50 series.

Redmi has also confirmed that the Redmi K50 series will come with 120W fast charging, which can fully charge the 4700 mAh battery in 17 minutes flat. The numbers are impressive, but if leaked specs are to be believed, 120W fast charging will be reserved for the highest variant in the series, presumably called the Redmi K50 Pro Plus. However, the early leaked specs mention a higher 5,000 mAh battery capacity, so take the leaks with more than a pinch of salt in light of this discrepancy.

The Redmi K50 series is expected to launch in February 2022 in China, and we hope to see the devices also reach other regions under different names while retaining their competitive value.