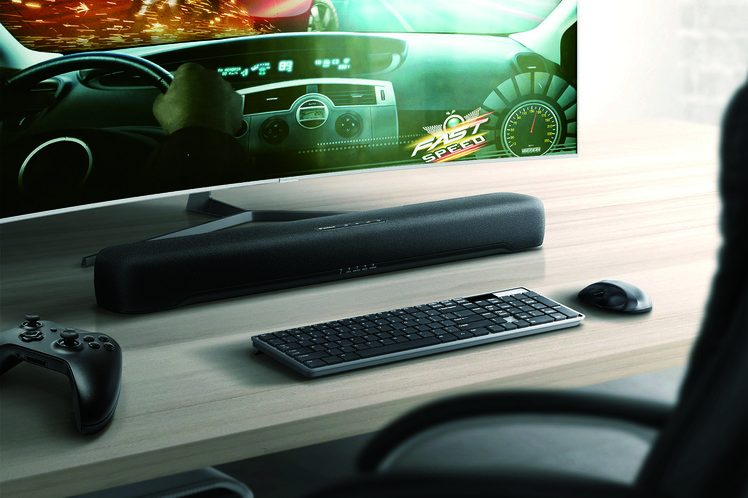 When we listened to Yamaha’s SR-B20A soundbar, we suggested that it was both small and affordable by the usual Yamaha standards. So, of course, the next Yamaha product through the doors is this, the SR-C20A – and it’s both smaller and more affordable than the SR-B20A. Which must mean that by Yamaha’s standards, the SR-C20A is both microscopic and an absolute bargain.

Which is true, up to a point. Small is ‘small’ no matter the manufacturer you’re talking about, but one company’s affordable may well be another’s pricey. So really what we need to know is not so much whether the SR-C20A counts as affordable, but more whether or not it’s worth the money.

Did we mention the Yamaha is small? The SR-C20A doesn’t need any special treatment – it’s compact enough to sit beneath a TV or a games monitor without any aggravation. If it’s convenience you’re after, don’t look any further.

And the design here is just as discreet as the dimensions. The SR-C20A is impeccably finished, mostly in acoustic cloth. There are a few touch-controls on the top surface and a few LED tell-tale lights up front, and that’s about your lot. Because this is Yamaha we’re talking about, there’s a solidity about the SR-C20A that lets you know it’s built to last.

So while this soundbar might look expensive in terms of the quantity of materials it involves, be assured that they’re high-quality materials that have been put together by a company that knows exactly what it’s doing.

Just because you want a little soundbar, that doesn’t mean you want to scrimp on features, right? Happily, the Yamaha has what the American motor industry likes to call “just enough essential parts” to make it useful in any number of applications.

One HDMI ARC socket, a couple of digital optical inputs, a 3.5mm analogue input, and Bluetooth 5.0 wireless connectivity should cover pretty much any eventuality. No matter whether you need the SR-C20A to beef up your gaming experience, make your movie soundtracks do a bit of justice to the images, or even act as a wireless music speaker, the Yamaha’s specified to do a bit of everything.

Once your audio content gets on board the SR-C20A, it’s dealt with by 100 watts of Class D amplification driving three drivers. Two 1.8-inch full-range drivers face forward from the edge of the ‘bar – they get 20 watts each. The remaining 60 watts powers a 75mm bass driver (Yamaha insists on referring to it as a “subwoofer”, perhaps because you can’t add a separate one – which you can with the SR-B20A) that faces upwards and fires from the top of the chassis. 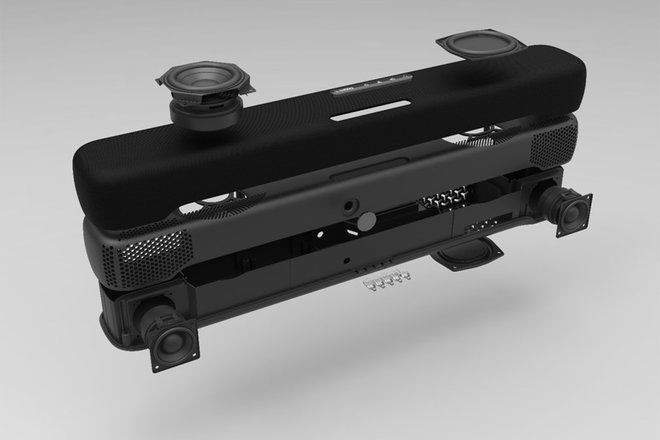 In case this sounds a bit tentative as far as bass response is concerned, this woofer is reinforced by a couple of passive bass radiators. They’re the same size as the bass driver – one faces upwards, the other downwards – so if you’re standing the SR-C20A on a surface, rather than attaching it to a wall using its integrated keyhole fixings, the boundary to the downward-firing radiator is next-to-nothing. Which ought to reassure bass-heads everywhere.

The good news is this: Yamaha’s splendid SB Remote control app (available free on Apple iOS and Google Android) will operate the SR-C20A. Everything you might need the soundbar for can be controlled from here and, what’s more, be controlled in a stable, logical and straightforward manner. Not every control app is as useful and easy as this one. 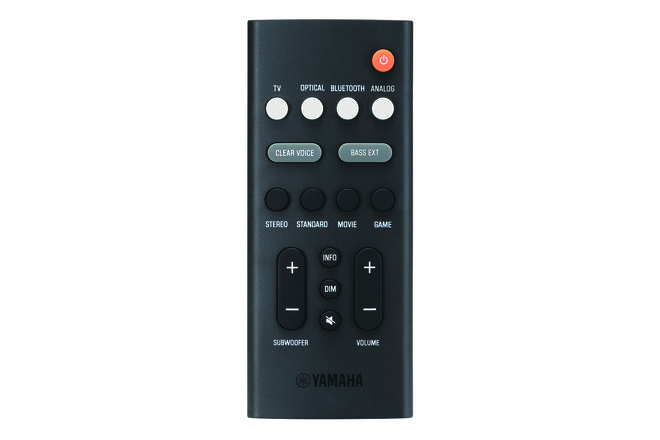 There’s also a full-function remote control – it’s as relatively compact as the SR-C20A itself, but not really as pleasant as an object. Oh, it has everything you need – independent controls for overall volume and subwoofer level, all the different EQ presets (game, stereo, movie, clear voice and, rather recklessly, bass extension) and so on.

It’s just that the physical remote feels quite cheap and nasty in the hand. So you’re better off sticking to the control app. Or, if you find yourself in the vicinity of the soundbar itself, there are those few touch-controls for volume, input selection, and so on.

Yamaha has designed the SR-C20A to be adaptable, as well as discreet. So no matter if its primary purpose is to enhance movies or gaming, or to act as a wireless speaker for music, it’s able to give a good account of itself.

In any event, the SC-R20A produces a bigger, more expansive sound than really seems likely from such a modestly sized device. There’s plenty of sonic width on offer, despite the fact the drivers face forwards and upwards, and even a little height too. If you’re used to the unaccompanied sound of a TV or games monitor, the Yamaha will thrill you with the scale and dynamism of its sound. 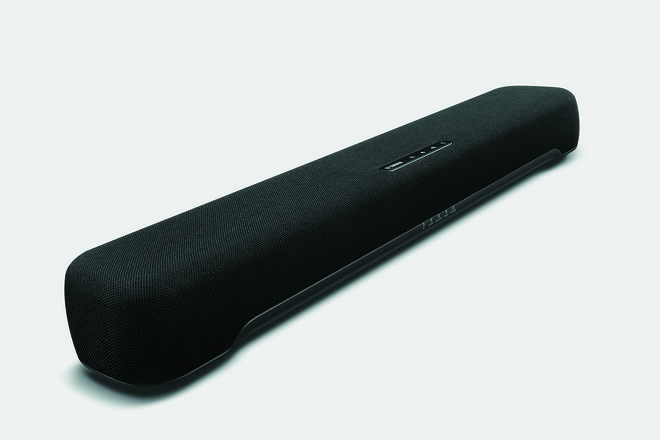 As might have been predicted, the SR-C20A is not short of bass presence. What’s less predictable is how well controlled, detailed and generally well-behaved it is. Some other soundbars (including some of Yamaha’s range) get a bit carried away where the low frequencies are concerned – after all, what’s more immediately impressive than a big old load of bass? But the C20A has enough about it to keep the bottom-end stuff in check, leaving the midrange clear to get on with the essential work of handing over movie dialogue without interference.

The midrange here, in fact, is detailed and information-packed – which, if a film or a game or a vocalist is going to be easy to follow, is a prerequisite. There’s plenty of space around voices no matter how hectic the rest of the frequency range gets, and the Yamaha is pretty forthright without ever getting pushy. Unless you really turn up the volume, anyway.

At the top of the frequency range there are the same impressive detail levels as elsewhere, as well as decent substance and equally decent control. There’s a difference between ‘attack’ and ‘unruliness’, especially where treble sounds are concerned – the Yamaha understands this, and plays a well-judged game. 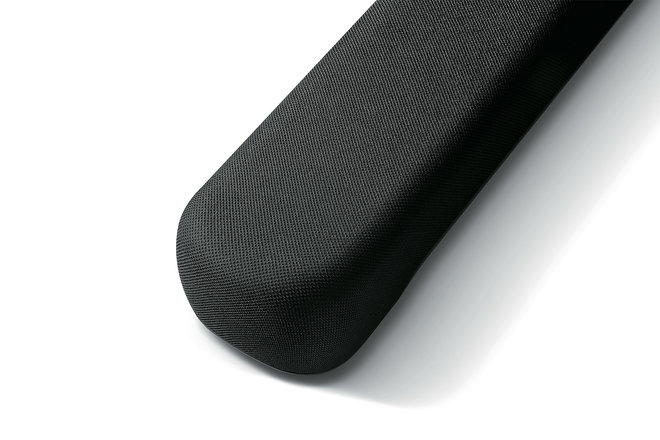 There’s a good facility with dynamism here, too. Games and films alike rely a lot on switching (often without prior warning) between very quiet and really very loud indeed, and the SR-C20A can make that a considerable distance. It establishes a believable soundstage, too, and is able to organise numerous elements of a soundtrack with real coherence.

If you’re one of those listeners who likes to ramp up volume levels, though, quite a lot of the good stuff is undermined. Big volume coarsens the treble response, loosens the grip on the bass, and forces more-or-less every element towards the front of the stage. And what was previously a quite deft and insightful listen becomes, well, a bit shouty.