Microsoft has released an optional update for Windows 10 and Windows 8.1 that will remove all traces of Adobe Flash Player from the operating systems when installed. Adobe Flash will be retired at the end of 2020 and companies like Microsoft, Google, and Mozilla have announced that they will drop support for the product in their browsers and systems.

KB4577586 will remove the native Flash Player installation on Windows 10 and 8.1 devices it is installed on. The update is only available on the Microsoft Update Catalog website and not via Windows Update, WSUS or other update management systems at the time of writing. 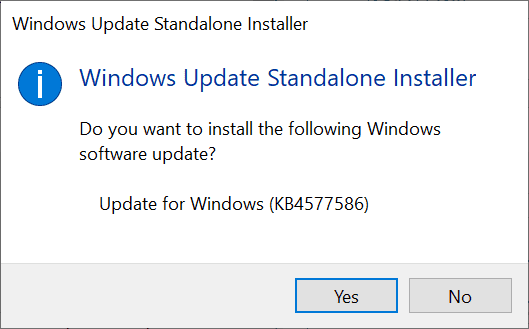 Windows Installer displays a confirmation prompt, and the selection of Yes proceeds with the update installation. The installation does not require a reboot, and Adobe Flash Player functionality should be removed from the system and Microsoft’s web browser. You can check the AppData/Roaming folder under the user directory to find out if the Macromedia folder is no longer there. Flash content won’t load anymore in Microsoft browsers once the update is installed.

Update: there appears to be some confusion regarding the update and the removal of Flash. The update removes Flash support in Internet Explorer and legacy Edge only, and not in the new Microsoft Edge browser. End

Note that the removal does not affect other browsers, e.g. Google Chrome, that may ship with Flash Player functionality.

The update will eventually be pushed via automatic updating systems such as Windows Update, as Flash Player won’t be supported after 2020 anymore.